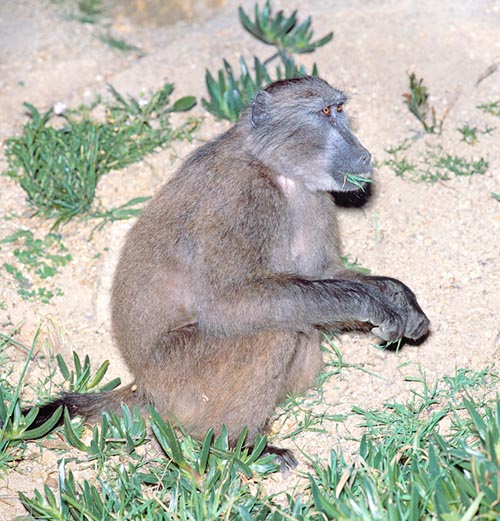 Some specimens may be found in Zambia, where the Yellow Baboon (Papio cynocephalus cynocephalus) is more common.

The choice habitat is the savannah, even if arid, provided having drinking points, the bush and zones of open forest.

It also colonizes mountain grounds, where is extremely comfortable on the steepest slopes which offer it, among other things, shelter and protection during the night time.

Nevertheless, the leopard, one of the most important predators of the baboon, does not hesitate in hunting it even on rugged rocks. In our reserve, even from home, it is possible to hear the screams of the troops of baboons, when a leopard does sudden incursions; and, usually, when these apes are heard during the night means that an attack is on the way.

The general and morphologic characteristics of the genus Papio are very much similar, but the Papio ursinus is the species reaching the biggest size.

Even if the body weights reported on many texts are included between the 15 and the 35 kg, I have noted personally a weight of 50 kg (individual not in captivity and not overweight), and many male specimens exceeding the 40 kg. The females are smaller and lighter, with a weight of 12-18 kg. An adult male may be 70-85 cm long (from the muzzle to the root of the tail), whilst this last measures 60 to 85 cm. The female is 50 to 65 cm long, with a 50-60 cm tail.

The particular shape of the head and of the muzzle, so much different from that of other apes, is related to exigencies imposed by the type of life, alimentation and habitat. 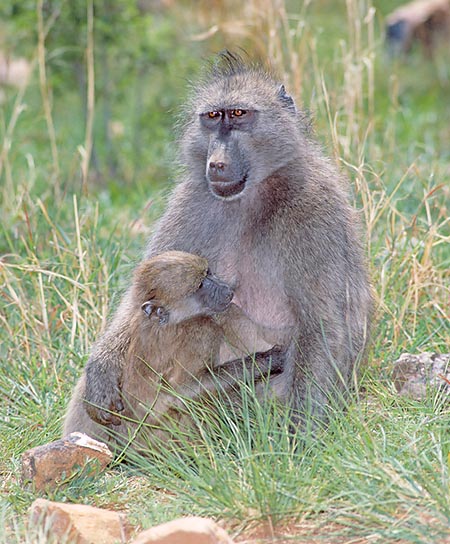 Female with cub. A group may count even 200 individuals © Giuseppe Mazza

The cynocephalic apes, actually, normally walk like canids, proceeding on the four legs, with the muzzle pointing ahead.

The eyes, small, deep-set and close, are placed frontally and guarantee an excellent binocular vision, but with a more limited visual field than other animals (a characteristic which is more suitable for the open areas of savannah than for the forest), and are overhung by accentuated supra-orbital arches.

The naked parts of the “face” (lips, ears, nose) as well as the hands and feet, are black. The long nasal canes contribute in guaranteeing the animal a sense of smell greater than that of many forest monkeys, particularly useful for finding the food and also for discovering possible predators, which abound in the savannah zones.

The ears are virtually naked and are in good part visible. The long muzzle and the extremely ample opening of the mouth, large enough to open wide the mandible of more than 150 degrees with respect to the maxillary, allow to discover four canines, cutting as razors, and long (the upper ones) even 7 cm (5 cm as an average).

These teeth, together with the lower premolars, equipped of cutting margins and fitting together like shears with the upper ones, represent a terribly efficacious and dangerous weapon, capable not only to kill, in some cases, a man, but even a leopard, in the case several males join for attacking it.

These tusks, obviously, are an effective defence weapon (used in cooperation with four hands extremely strong and nimble), but their presence is justified also by other factors.

First of all, the social life of the baboon puts it in front of a lively and at times fierce competition between males, so much that many times it happened to me to see males with appalling wounds and mutilations (in one instance, the almost total removal of the upper lip with exposure of the incisors and of the gum), secondly, the diet of the baboons is omnivorous and often these primates hunt actively animals of even a certain size. The body is robust, with front and rear limbs of almost the same length, and strong and agile hands and feet.

The track left while marching is typical: the “sole” (down below, in the photo) leaves an oblong and triangular footprint, where, at the extremities, are well visible the marks of the second, third, fourth and fifth toe, just separated by an “empty” space, whilst the first toe, opposable, is just ahead of the middle of the print. 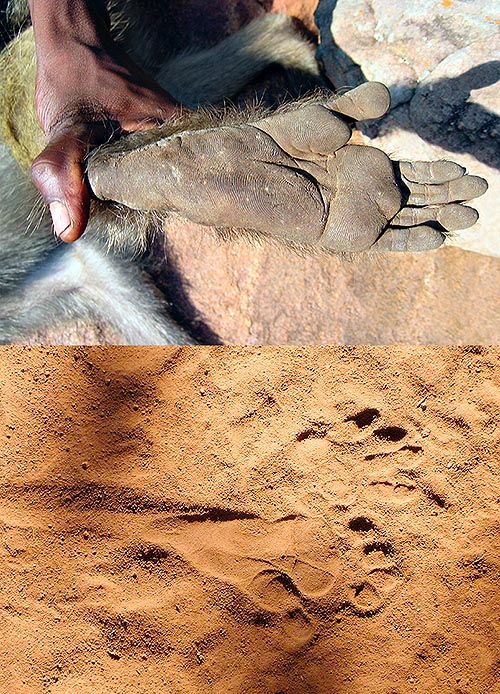 Foot of Papio ursinus and prints. It leaves an oblong and triangular mark © Gianni Olivo

The “hand” (in the photo, over the print of the foot), is usually leant with the “knuckles”, for which, on the mark, the fingers will look abnormally short, but this is due only to the fact that they are flexed.

The tail is long and carried in a characteristic position: the proximal part is headed up, and then it does a sort of an inverted U-curve, turning downwards.

The hair is, in the chacma, usually of a green-grey or yellowish-brown colour, with black ends, whilst the cubs are dark, with reddish “face” and the young are, on the contrary, lighter than the adult individuals.

With age, whilst the males tend to darken, the females “go white”, thus becoming paler.

The typical and characteristic ischial callosities and the evident red colour of the rear have their own precise function and conformation, depending on the sex.

In the female, the genital area becomes even more turgid and red, often with violet hues, which give the erroneous impression of something sick or unhealthy, or of an acute attack from haemorrhoids, especially when they go into heat; this is a clear visual signal of availability for the males, since that the primates have a colour vision, unlike other animals.

A clear hierarchy exists in the flocks, but this type of signal, shown by one or more females, will cause however a remarkable competitiveness, and, often, furious skirmishes.

As the baboon does not have any seasonality for the reproduction, these … scuffles may be observed all the year round, especially inside the great flocks

At times it has occurred to me to observe, with great fun, some strategies done by the young individuals for getting a …quickie, in the face of one of the dominant males: some young approach the female(s) in heat, raising the anger of the bigger male(s), which, in turn, they dash in pursuit of the supposed competitors, while other … training gigolos, get close for obtaining the favours of a female. The shining red colour of the rear of the female tends to decrease and fade when the oestrum ceases or when it is pregnant.

The male has also an ischial callosity, but less evident and coloured, furthermore, these callosities are a useful mean for recognizing male and female from far away (we remind that medium sized males and adult females may be easily be mistaken, whilst a big male is unmistakable for size, muzzle and posture). 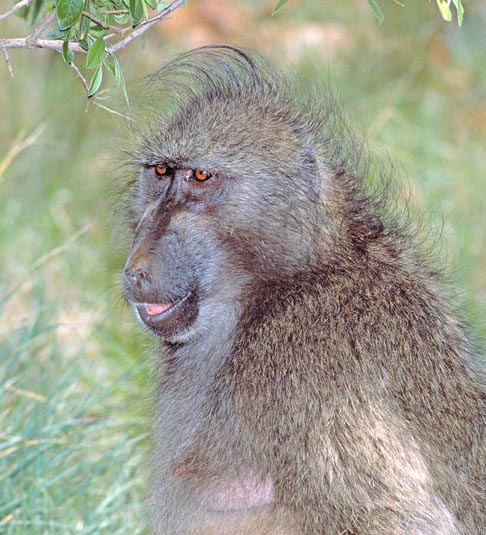 The male has always a single callosity under the tail, whilst the female, even when the zone is not congested, when close to the oestrum, has two distinct callosities, separated by the opening of the vagina.

The type of coloured signal connected with the sexual activity is not exclusive of the baboons and the cynocephalic apes.

As another example, in the Vervet monkey, or simply, the Vervet (Chlorocebus pygerythrus) it’s the male who exhibits a signal: already in adolescence, the males begin to show a blue scrotum, which contrasts with the red colour of the male organ; this colour gets much more evident and lively in the dominating males, as it is governed by the level of testosterone.

The baboon is a terrestrial animal, but only in the sense that it spends on the ground most of the time. In fact, it climbs willingly the trees, for sheltering, but also for feeding.

It is not territorial, but it’s strongly gregarious, forming groups even much crowded (from 10 to even more than 200 individuals), formed by females, young, cubs associated with adult males, usually with a prevalence of females in the order of 2:1 or of 3:1. The immature specimens may represent half of the total number.

Even if not territorial in the strict meaning of the word, the flocks have their own competency territory (home range, clearly differing from territory), which may vary from 500 to 5.000 or more hectares, depending on the nature of the ground and of the resources.

Different groups tend to ignore, but they may share the same “night quarters” is there is scarcity of sure locations. The social relationships are complex, and a wide range of sound signals are used for communicating different moods, warnings, alarm or easiness, with a remarkable complexity of nuances. The females remain for all their life in the flock whilst the males often move from a flock to another.

A rigid hierarchy is in force among the females and each female is a “landlady” in its family group: if a female is higher than another, the last one will have to show “respectful” and submissive also with the children, younger, of the other one. 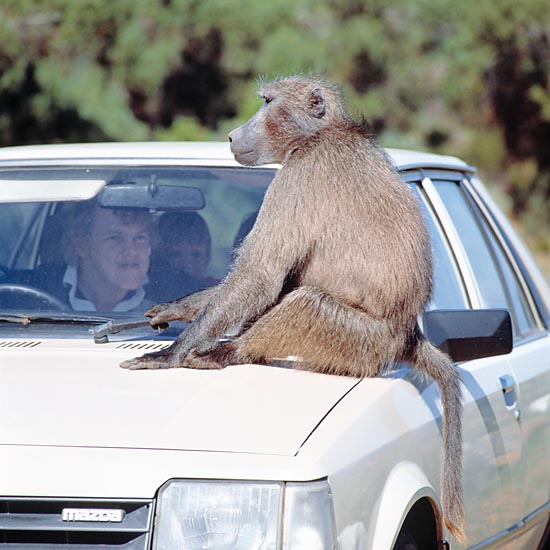 The males keep submitted to the mother authority till around the four years, when the canines begin to develop in real tusks and become, by that time, dominant on all the females, mother included, but they will have to observe the hierarchies with the males stronger than them, at least till when they do not feel capable to defy them.

The female becomes sexually mature around the 5 years of age, whilst the males need 3 year more, at least for being able to compete with the senior rivals.

The scarcity of reproductive occasions accounts the migrations of the males, which may leave a group for looking a better chance in another one, remaining there for one month or for even ten years.

The alimentation is extremely varied and omnivorous, going from the vegetables (leaves, fruits, berries, succulents, etc.) to organic substances (insects, larvae, reptilians, birds and mammals). In one instance, I saw a male baboon seizing a catfish. They may actively hunt and kill animals of a certain size, and at times they can kill a man, and even they can be responsible of episodes of cannibalism, as happens, on the other hand, also for the chimpanzee.

Quite recently, in South Africa, a baboon has grabbed the child to the mother, has climbed a pole and has eaten its brain. Instances of attacks are not rare; for this reason I recommend great caution, mainly if there are children with us and especially in locations where these apes are accustomed to the presence of the tourists.

Among other things, the habit to offer food to the monkeys, in picnic sites or in natural parks, is a very bad and dangerous idea and a misplaced desire of “fraternizing”, which renders these animals without fear towards the man, dangerous, as they associate the idea of the food with that of the man himself.