The species is native to northern Borneo (Sabah) where it lives in the humid forests, often on the trees of Gymnostoma sumatranum (Jungh. ex de Vriese) L.A.S.Johnson, on slopes of ultrabasic rocks between 500 and 900 m of altitude. The name of the genus is formed by the Greek prefix “παρά” (parà) =“similar to” and Phalaenopsis; the specific name is the Latin adjective “labukensis” = of Labuk, with reference to the place of origin of the type species.

The Paraphalaenopsis labukensis Shim, A.L.Lamb & C.L.Chan (1981) is a drooping monopodial epiphytic species with short stems, robust roots and 3-5 cylindrical grooved leaves, fleshy, that in nature may reach a length of about 3 m with a diameter of 6-8 mm. Axillar inflorescences 6-8 cm long bearing 5-15 flowers of 5-6,5 cm of diameter, perfumed, with wavy sepals and petals of golden brown colour with yellow margin and trilobed labellum with median lobe long and quite thin.

Species with showy blooming, rare in nature, due to the destruction of its habitat, and in cultivation, requires a slightly shaded exposition, medium-high temperatures in summer, 24-30 °C, slightly cooler in winter, with night lowest not under the 16 °C, high humidity, 70-85%, and constant ventilation. 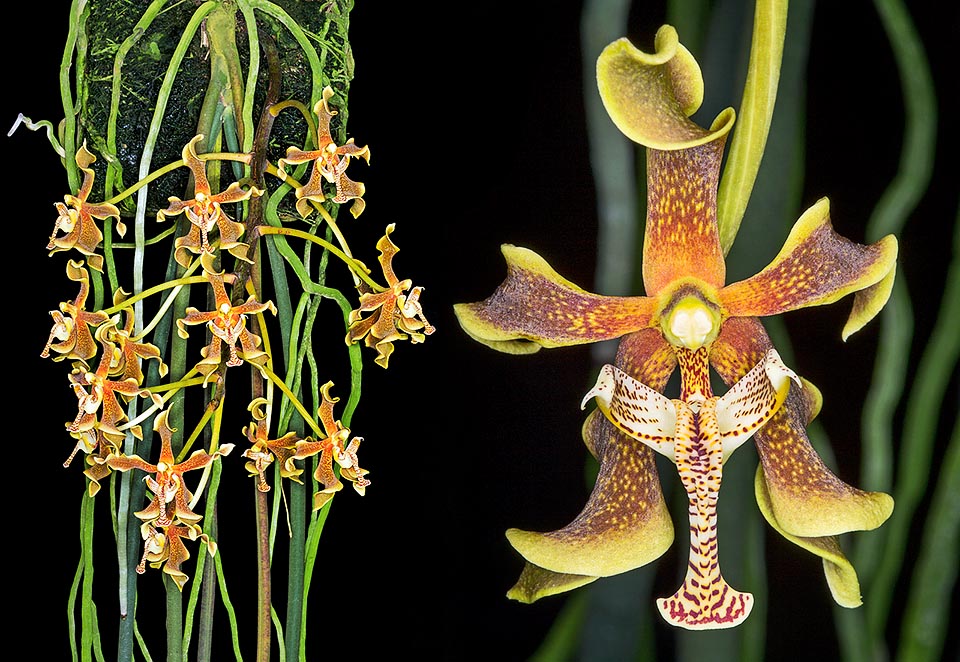 It is preferably mounted head down on trunks, bark, rafts of cork or of arborescent ferns roots with sphagnum or coir at the base; the waterings must be frequent, even daily, especially if in presence of high temperatures, utilizing rain water, demineralized or by reverse osmosis. If cultivated in pots or suspended baskets is to be utilized a particularly draining and aerated compost that may be formed by bark fragments of medium/large size with addition of inerts, with more spaced waterings in order to allow the substratum to dry up almost completely before watering again, being the roots easily subject to rottenness due to stagnant humidity. For the fertilizations, duly alternated with the waterings to avoid salts accumulations at the roots, may be used a hydrosoluble balanced manure, with microelements, at ¼ of the dosage suggested on the package.