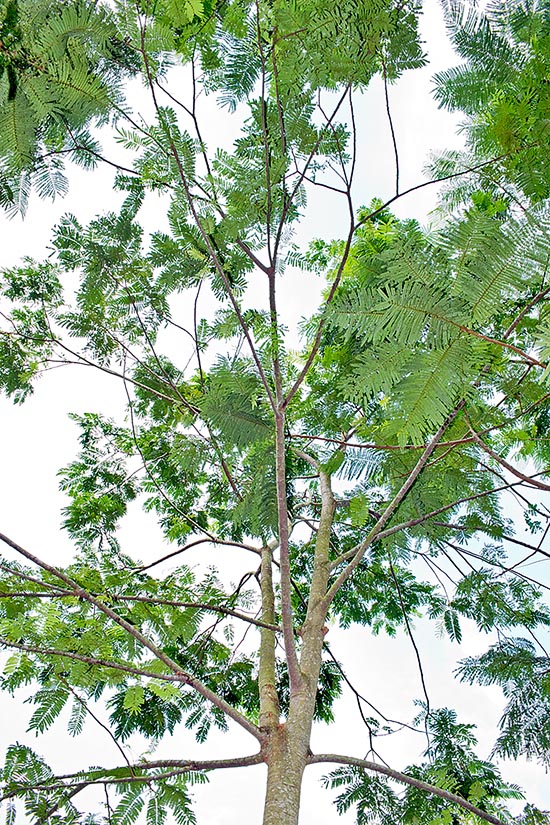 The species is native to Indonesia, Malaysia and Thailand where it grows in the pluvial forests on sandy or clayey soils, often along the water streams banks, at low and medium altitudes.

The genus is honoured to the Scottish physician and explorer Mungo Park (1771-1806); the specific name is the Latin adjective “speciosus, a, um” = beautiful, magnificent, with obvious reference.

The Parkia speciosa Hassk. (1842) is a tree deciduous for short period, 15-35 m tall, with cylindrical trunk, up to about 1 m of diameter, with smooth pale grey to dark brown bark; in the old specimens may be present at the base tabular roots (flat roots similar to buttresses that contribute to the support of the big trees) up to 1,5 m tall. The leaves, grouped in terminal part of the branches on a 5 cm long petiole, are alternate, 20-40 cm long, bipinnate, with 15-25 opposite couples of pinnate leaflets, 5-9 cm long, each one with 20-30 couples of oblong-linear leaflets with rounded apex, 5-7 mm long and about 2 mm broad. The inflorescences, on drooping robust peduncle about 10-30 cm long, are axillar, oblong-pyriform, 5-9 cm long, with a dense multitude of brownish yellow flowers, sterile or male at the base, bisexual at the apex, about 8 mm long and of 1,5 mm of diameter. Tubular calyx 6 mm long with unequal lobes 1,5 mm long, tubular corolla slightly longer than the calyx, with 5 linear lobes with rounded apex, and 10 stamina, 1 cm long, merged at the base in one tube; the flowers, that smell of sour milk, are rich of nectar and mainly pollinated by the bats. The fruit is a drooping flat legume, more or less twisted, 25-40 cm long and 2-3 cm broad, initially pale green, then blackish, containing 12-16 ovoid seeds, 2-2,6 cm long and 1,4-1,8 cm broad, of green colour.

It reproduces by seed, that must be interred in the shortest possible time having a short lasting germinability, in draining organic loam maintained humid at the temperature of 26-28 °C, with germination times of 5-15 days and first blooming starting from the seventh year of age; more frequently, in order to reproduce certain varieties, recourse is done to the semi woody cutting, air layering and grafting.

Little known species out from the origin areas, cultivable in the tropical and humid subtropical climate zones in full sun, except during the juvenile phase when it needs a slight shade, on draining soils slightly acidic to neutral. Young specimens can be cultivated in pot in order to be sheltered in particularly luminous protected location, where the climate does not allow the continuous permanence in open air, with lowest winter temperatures preferably not under the 16 °C.

Very popular in the origin zones where the legumes are consumed as vegetable and the seeds, with a penetrating odour of garlic, rich of proteins, minerals and vitamins, in particular vitamins C and E, are consumed, after having been dried up in the sun, raw, roasted or fried, or added to traditional dishes. Furthermore, the leaves are used as fodder for the cattle and the wood, light and short lasting, in the fabrication of paper and of plywood.

The seeds are utilized since remote times in the popular medicine, in particular in treatment of diabetes and of the hypertension; laboratory studies have evidenced the presence in the legumes and the seeds of bioactive compounds, such as flavonoids, lectins, polyphenols and phytosterols, of possible employment in the official pharmacopoeia.