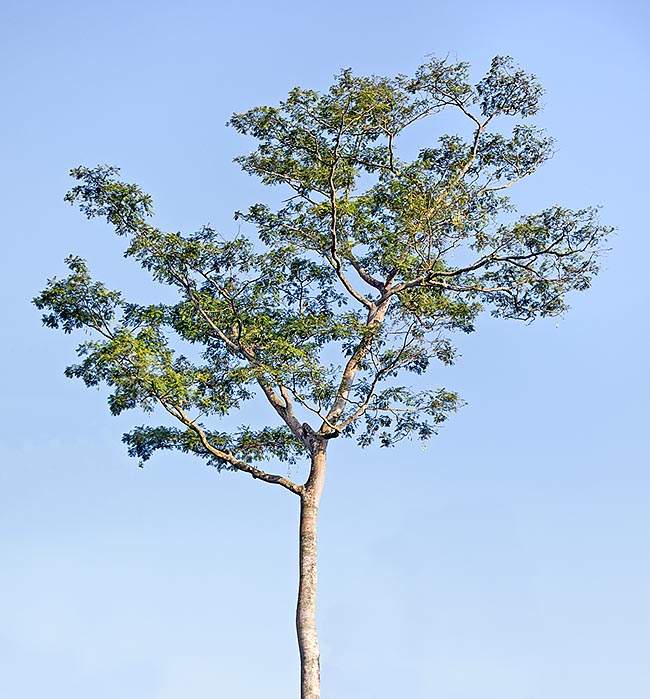 The species is native to India (Assam), Indonesia, Malaysia, Myanmar and Thailand where it grows in the humid forests, mainly from the sea level up to about 600 m of altitude.

The genus is honoured to the Scottish physician and explorer Mungo Park (1771-1806); the Latin name of the species refers to one of its origin places, the Island of Timor.

The Parkia timoriana (DC.) Merr. (1910) is a tree tall in nature up to 30-40 m, deciduous for 1-2 weeks, with cylindrical trunk up to about 80 cm of diameter, which, in the oldest specimens presents at the base tabular roots (flattened roots similar to buttresses contributing to the support of the tree), and greyish brown bark.

Axillary inflorescences, on robust, 20-45 cm long, drooping peduncle, obovoid or pyriform, about 6 cm long and of 3-4 cm of diameter, carrying a crowd of tiny yellowish white and unpleasantly odorous flowers, sterile at the base, male in the median part and bisexual at the apex, with about 0,6 cm long calyx, penta-lobed tubular corolla, 1 cm long and of 0,2 cm of diameter, and 10 stamina; the flowers rich of nectar and self-incompatible, are mainly pollinated by the bats, in particular Eonycteris spelaea (Dobson, 1871). The fruit is a flat linear legume, 20-30 cm long and 3-3,5 cm broad, initially green, glossy blackish when ripe, containing 13-20 black ovoid seeds of about 2 cm of length. 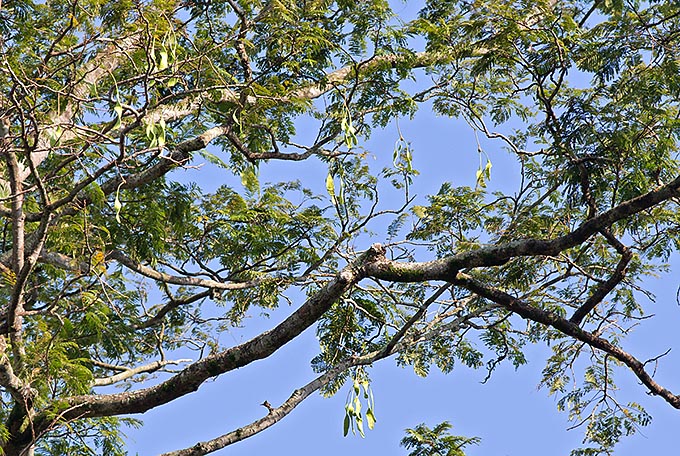 It's a South-East Asian leguminous, pollinated by bats, with edible fruits and medicinal virtues © Giuseppe Mazza

It reproduces almost exclusively by seed, as the cuttings have a low percentage of rooting, previously scarified and immersed in water for 1-2 days, in sandy organic loam maintained humid at the temperature of 24-26 °C, with germination times of 2-6 weeks.

Species very diffused in the origin zone, fast growing, with undoubted ornamental characteristics due to the elegant foliage and the curious inflorescences, utilized in the tropical and subtropical climate zones as shade tree in parks and gardens and at the borders of the roads, but also in the coffee plantations and in the reforestation and for the control of the erosion. It requires full sun and is nor particular about the soil, even if poor, preferably acidic or neutral; well rooted plants can stand short periods of drought.

The green legumes are consumed as vegetable and sold in the markets, also the seeds are edible, raw, boiled or roasted. The species occupies also a prominent position in the traditional medicine of the South Asian countries, the leaves and the bark are utilized in the skin infections, the roasted and powdered seed for various pathologies. The wood, of decent quality, is used in joinery, furniture, interior finishes, cases, and in the paper industry, as well as fuel.