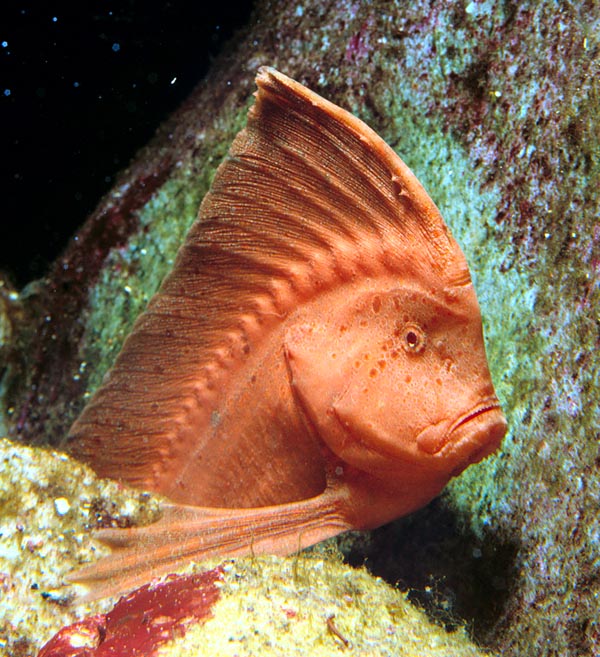 An upset Apache chief with plumed headgear bas-relief? No, it's a Pataecus fronto © Giuseppe Mazza

The Red Indian fish (Pataecus fronto Richardson, 1844) belongs to the class of Actinopterygii, the ray-finned fishes, to the rich order of Scorpaeniformes and to the small family of the Pataecidae which counts only three genera and three Australian species: the Aetapcus maculatus, the Neopataecus waterhousii and our Pataecus fronto.

The name of the genus “pataecus” comes from the Greek “pataikos”, a genius or a god of Egyptian origin, then Phoenician and finally adopted also by the Greeks, who was represented as a dwarf.

Carved as a lucky charm, it was also present on the bow of the sail vessels of the time in order to ward off bad luck. Its severe profile, with its rich hair flowing, must have struck the imagination and the classical reminescences of Sir John Richardson (1787-1865) Scottish surgeon of the Royal Navy, explorer and author of various naturalistic works dedicated manly to the fishes.

The name of the species “fronto” comes from the Latin “frons, frontis”, and refers to the huge dorsal fin which prolongs the front with an almost human look.

The vulgar name of red Indian fish has nothing to do with India, but with North America: the dorsal, with its grooves, in fact imitates the plumed headgear of the great Indian chiefs.

It is an endemic species present in the Indo-Pacific along the Australian southern coasts. We find it from Shark Bay, Western Australia, up to Brisbane, Queensland. 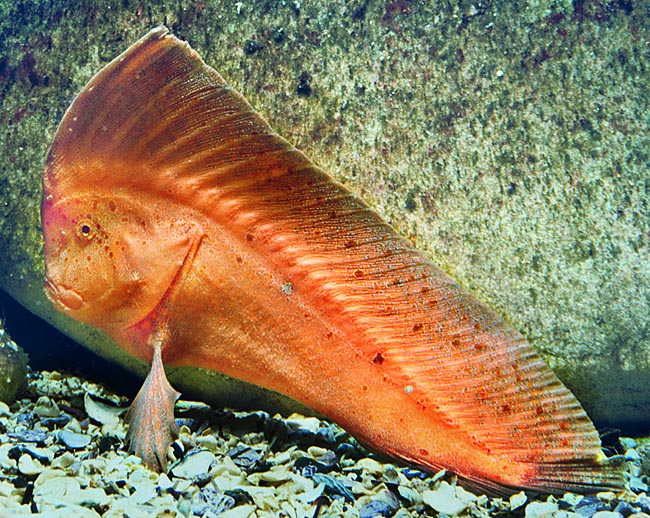 It is a benthic fish, associated to the reefs and the rocks, generally living camouflaged among the sponges around the 20 m of depth; but it is frequent also in the estuaries and it can be found at only 10 m of depth as well as at 80 m on the outer side of the coral reefs.

It is a rare animal who has never had bad experiences with the man and therefore it can be easily approached by the divers which are so lucky to find it. So, it can pose long time for the photographs, without fear, indifferent to the flash shots.

It was discovered, while observing it, that in order to increase the mimicry, it flutters among the sponges, in perfect synchronism with the currents, and that when removed lets itself fall vertically on the bottom, imitating a dead leaf, and then gets back, calmly, once the danger has gone, to its preferred location.

The red Indian fish usually measures 22-30 cm, but with the bottom nets they have casually fished specimens of even 35 cm. The body, scaleless like the morays, appears very compressed laterally. 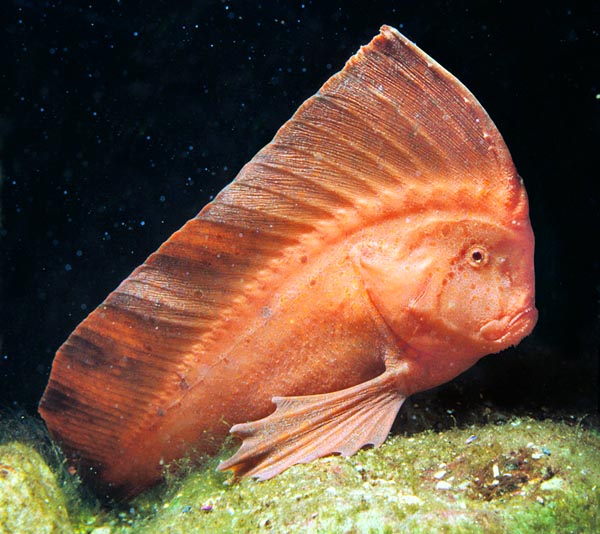 It is scarlet, red or orange, but at times also pale with dark or white small spots.

The mouth, oblique, with the sides bent downward conferring it a sad look, according to human facial expressions, carries on both jaws parallel rows of tiny teeth.

The red Indian fish nourishes mainly of shrimps and other benthic crustaceans. Seen its rarity, little is known about the biology of this odd animal, but it has been discovered that, like the snakes, it regularly moults. When it grows, or the skin is old, it changes it as if it were a used outfit, in one swoop, getting rid in the meantime of the parasites and the encrusting weeds.

Even if there are no precise studies about this, it seems that the populations of the Pataecus fronto are stable and that presently the species has a low risk of extinction. The vulnerability index of this species is of 14 over 100.