The species is native to Andaman Islands, Assam, Bangladesh, Borneo, Cambodia, Himalaya, India, Java, Laos, Malaysia, Moluccas, Myanmar, Nepal, Philippines, Singapore, Sri Lanka, Sulawesi, Sumatra, Thailand and Vietnam, where it grows on the trees of the humid forests or on the rocks, often close to water streams, up to about 1600 m of altitude.

The generic name is the combination of the Greek substantives “φάλαινα” (phalaina) = butterfly and “ὄψις“ (opsis) = look, with obvious reference; the specific name is the Latin adjective “deliciosus, a, um” = delicious.

The Phalaenopsis deliciosa Rchb.f. (1854) is an epiphytic or lithophytic species with short stem, wholly hidden by the imbricate foliar bases, and elliptic to obovate-lanceolate leaves with obtuse or slightly pointed apex and wavy margins, 6-15 cm long and 3-5 cm broad, fleshy, of dark green colour and glossy. Lateral inflorescences, 8-18 cm long, at times ramified in the apical part, bearing several close flowers opening gradually for long time, of 1,5-1,8 cm of diameter, waxy, of whitish colour with sepals and petals dotted of pale purple, in particular near to the base, and pale purple streaked labellum. 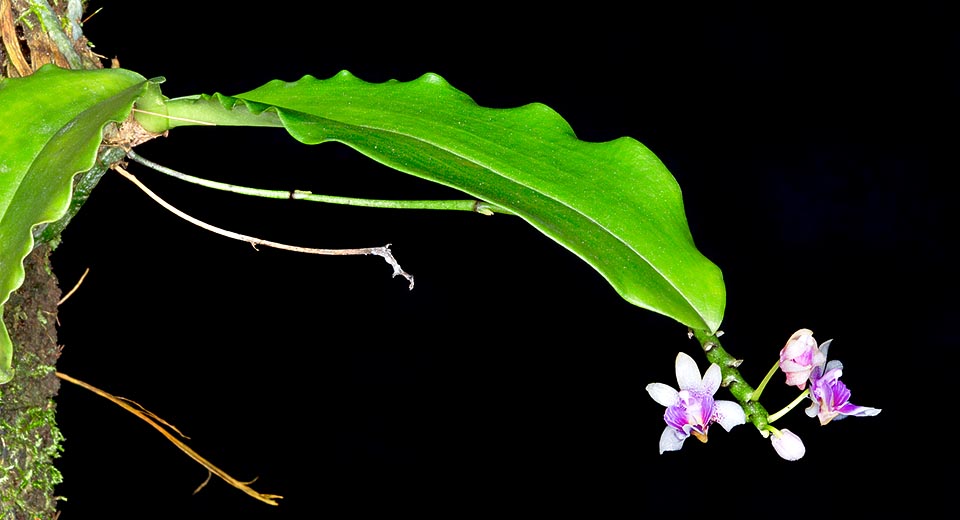 Epiphyte or lithophyte of South-East Asia tropical forests, Phalaenopsis deliciosa has short stem and big leaves that may reach the 15 cm © Giuseppe Mazza

Elliptic dorsal sepal with slightly pointed apex, 6-8 mm long and 3 mm broad, ovate lateral sepals with obtuse apex, about 6 mm long and 4 mm broad. Ovate-elliptic petals with obtuse apex, about 5 mm long and 3 mm broad; trilobed labellum, 8-12 mm long and 8-9 mm broad, with a sort of conical spur at the base, with elliptic-obovate lateral lobes, about 4 mm long and 3 mm broad, apart and ascending, and obovate median lobe with retuse apex, 5-6 mm long and 4-5 mm broad, and 3-4 mm long curved column. Remontant miniature orchid with long lasting inflorescences that has originated numerous hybrids, requires slightly shady position, even some hours of sun in the morning, intermediate temperatures, 18-30 °C, with lowest night values in winter not under the 15 °C, high humidity, 70-85%, and constant ventilation. The waterings must be regular and abundant in summer, slightly more reduced in winter, to be done preferably in the morning, so as to allow the plant to be dry by the night, avoiding in particular stagnations at the axil of the leaves that may cause rotteness, utilizing rain water, demineralized or by reverse osmosis.

Biweekly fertilizations during the vegetative period utilizing a balanced hydrosoluble manure, with microelements, at ¼, or less, the dosage suggested on the package. It is usually mounted on trunks, on bark pieces or rafts of cork or of roots of arborescent ferns, with sphagnum at the base to maintain the humidity; if cultivated in pot the aeration of the compost is to be particularly cared, with the addition of inerts, and the waterings must be duly more spaced than those of the mounted plants to avoid dangerous stagnations at the roots. The floral stems are to be cut when completely withered, as they can bloom again for several years. 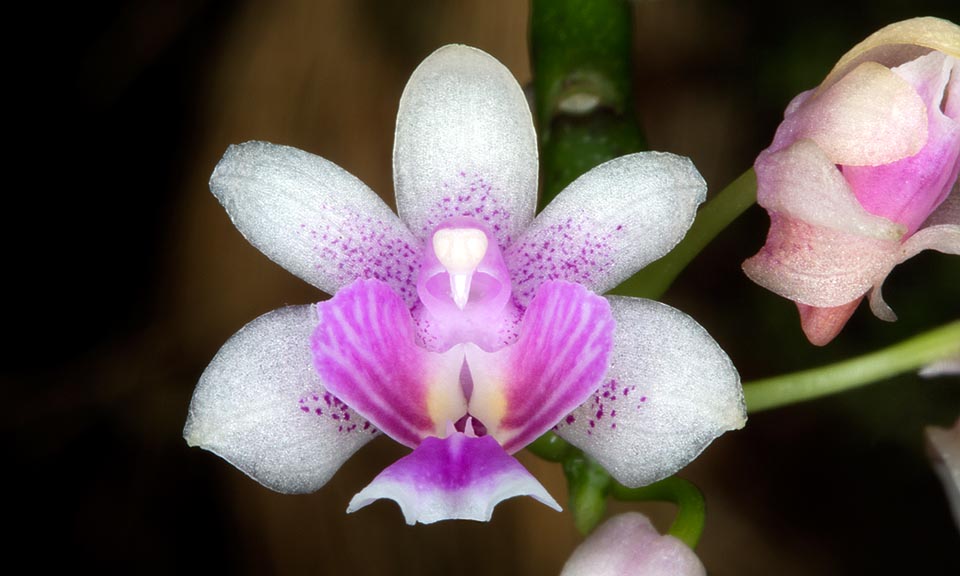 Due to the indiscriminate collection and the reduction of its habitat its population has considerably reduced so much to be inserted in the red list of the IUCN (International Union for the Conservation of Nature and Natural Resources) as “Vulnerable” (species at ris of extincrion in nature).