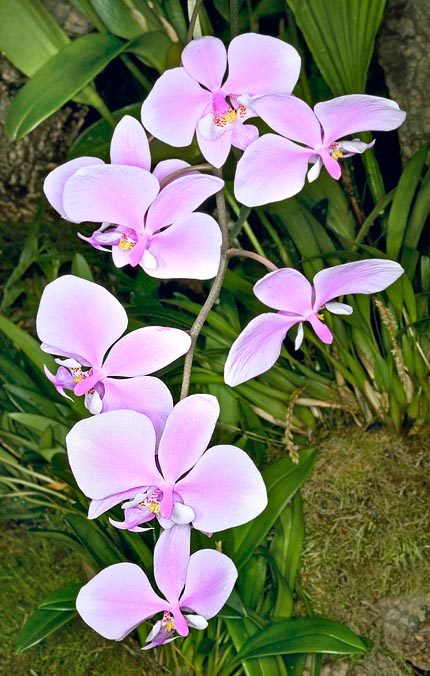 The species is native to Philippines, where it lives in the humid forests between the 200 and the 450 m of altitude.

The name of the genus is the combination of the Greek terms “phalaina” = butterfly and “opsis” = look, with obvious reference; the species is honoured to the German orchids collector Gustav Wilhelm Schiller in whose greenhouse it did bloom for the first time in Europe.

The Phalaenopsis schilleriana Rchb.f. (1860) is an epiphytic species with short stem entirely hidden by the imbricate foliar bases, several flat roots and fleshy, distichous, leaves, from elliptic to oblanceolate, of dark green colour spotted of silvery grey in the upper page, uniformly purple n the lower one, up to about 40 cm long and 8-12 cm broad.

Curved inflorescences, often hanging, up to about 1 m long, usually ramified, with a variable number of scented flowers, up to more than 200 in the most robust specimens, of 6-8 cm of diameter, with sepals in various shades of pink, paler at the edges, and speckled of purple at the base, petals of the same colour as the sepals, but without speckles, labellum from white to dark purple, with the base of the lateral lobes speckled of red.

The sepals are elliptic, 3,5 cm long and 1,5 cm broad, the petals are rhomboidal with rounded apices, about 4 cm long and broad, the labellum is trilobed, 2,2 cm long and 3,4 cm broad, with oblong-obovate lateral lobes and ovate median lobe with at the apex two diverging curved appendices and a fleshy outgrowth (callus) at the base, of bright yellow colour speckled of red.

The flowers are long-lasting when on the plant, about one month, when cut much less. It reproduces by seed, in vitro, but, usually, by micro-propagation.

The Phalaenopsis schilleriana is considered as one of the most beautiful of the genus, not only for its spectacular flowering, but also for its particularly ornamental foliage.

Of easy cultivation, it requires a shaded position, even if it stands much luminous situations, but not the direct sunlight, medium-high temperatures, 18-30 °C or more, constant and high atmospheric humidity, 60-80%, and good ventilation.

In summer, during the vegetative period, the waterings must be regular and abundant, in winter, when the growth of the leaves has stopped, they are to be reduced but without allowing to dry up completely; stagnations at the axil of the leaves are to be avoided, especially by night and with medium-low temperatures.

In order to get an abundant flowering, it is useful, in autumn, to submit the plant to a cool period with night temperatures of 14-16 °C and daily highest not exceeding the 26 °C.

The floral stem is to be cut when withered or, if we are sure it has completed the blooming, under the first node which has carried flowers, as there might be, even after some time, the emission of a new stem from the lower nodes.

For the waterings and nebulisations is to be used rain water, or water obtained by reverse osmosis or demineralised; the fertilizations, duly distributed and alternated, in way to avoid salts accumulations at the roots, are to be done during the vegetative period preferably with hydro-soluble balanced products, with microelements, at ¼ of the dosage suggested on the package. It can be mounted on trunks, bark, cork raft or cultivated in pots, even suspended, with compost which can be formed by medium sliced bark fragments; the repottings are to be done by the end of the flowering.