Phalaenopsis : the easy orchid which grows up well at home

The winged orchid. Orchids easy to cultivate also at home. Novelties from an hybridisator in the Côte d’Azur. 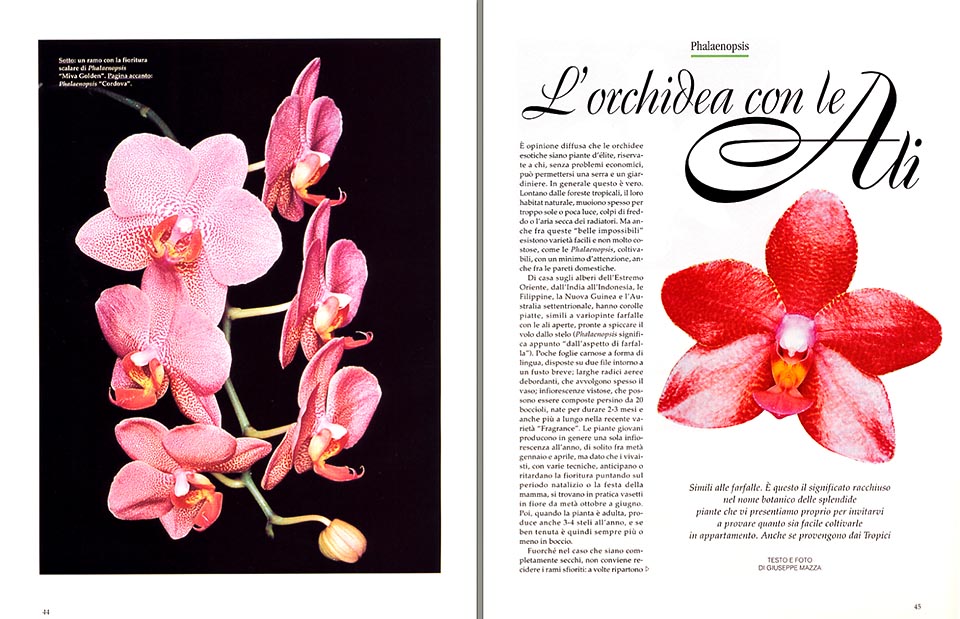 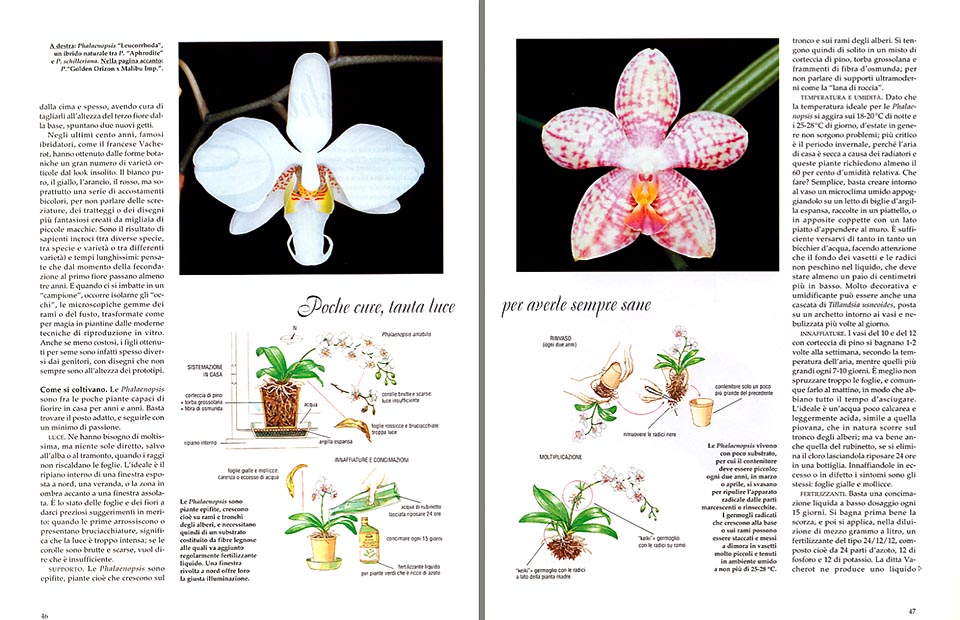 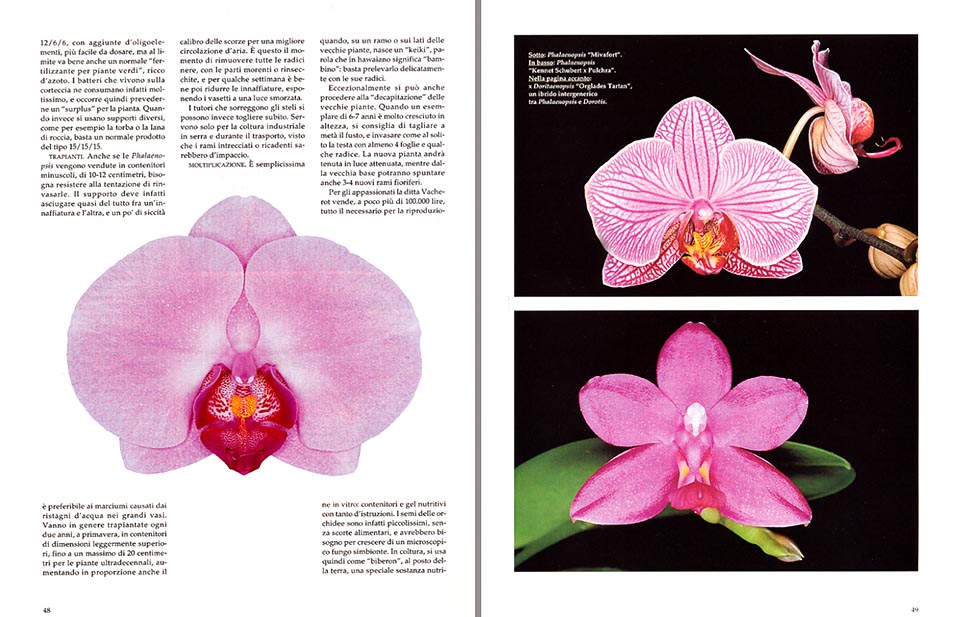 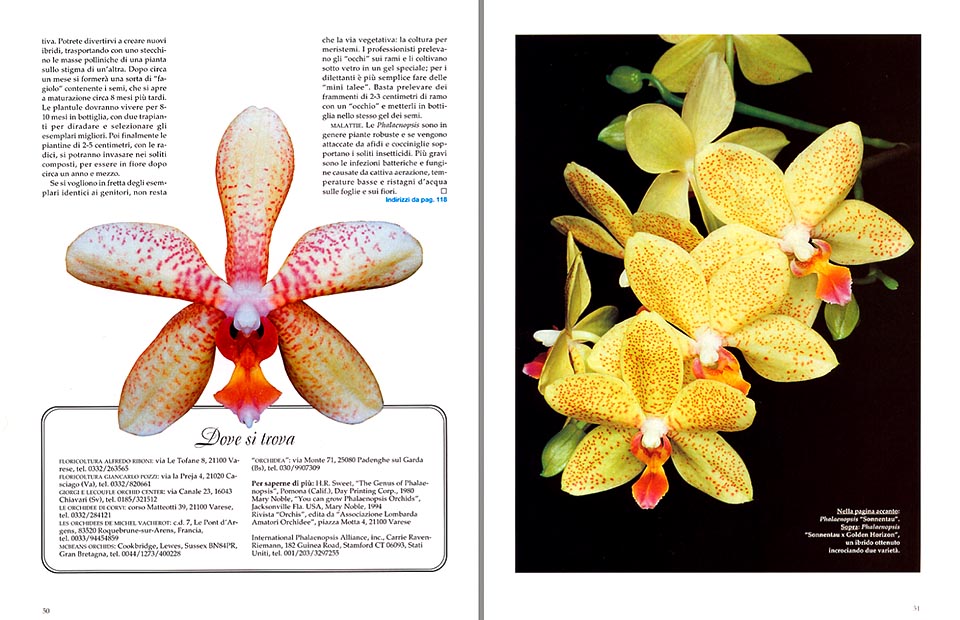 It’s a widespread belief that the orchids are special plants for people without money problems, who can afford a greenhouse and a gardener.

And, in fact, it’s like this. Chills, dry air due to the radiators, too much sun, or not enough light, and these frail creatures of the Tropics, do not live a long time far away from their forest, and therefore we have to content ourselves of the cut flowers of the shops, brilliant and precious like jewels for big occasions.

Nevertheless, also between these “impossible beauties”, do exist easy and not expensive species, like the Phalaenopsis, cultivable, with some attention, even within our own four walls.

At home on the trees of the Far East, from India to Indonesia, Philippines, New Guinea and northern Australia, they have flat corollas, resembling to variegated butterflies, with the wings open, ready to fly up from the stem.

Few fleshy leaves with the shape of a tongue, placed in two rows around a short stem; wide overflowing aerial roots which often wind the sides of the pot; and showy inflorescences, with even twenty buds, born for lasting 2-3 months and even 6, in the very much perfumed variety Fragrance.

The young plants, as soon as purchased, carry, generally, one of them per year, usually between mid January and April, but as the nurserymen, with various techniques, anticipate or delay the flowering, counting on the Christmas period or the Mothers’ Day, we can practically find small pots in flower from mid October to June.

Then, when adult, the plants produces even 3-4 stems per year, and, if well kept, is therefore, more or less always, in bud.

If they are not completely withered, it is not the case to cut the faded branches: sometimes they start again from the top, and often, cutting them at the height of the third flower from the base, we can get two new shoots.

From the botanical forms, during the last 100 years, famous hybridizers, like the French Vacherot, have obtained a wide number of rustic varieties with an unusual look.

The pure white, the yellow, the orange, the red, but mostly, a series of two-coloured matchings, not to talk about the variegations, the hatchings, or the most fanciful drawings formed by thousands of small dots. Wise cross breeding and very long times, if we thing that from the moment of the fecundation to the first flower, more than two years generally elapse.

And, if we run into a “champion”, it is necessary to isolate the “eyes”, the microscopic gemmae of the branches or of the stem, and transform them in hundreds of small plants with the modern techniques of reproduction in vitro. Otherwise, the offspring obtained by seed can be rather different from the parents. More or less alike, but “by surprise”, and so, usually, cheaper than the forms perfectly identical to the prototypes got by vegetative way.

The Phalaenopsis are between the few plants capable to blossom at home for years and years. It suffices to find a suitable location for them, and to attend to them with a minimum of passion.

They need very much of it, but not direct sun, apart some transient ray by dawn, or by the sunset. The best thing is a veranda on the side in shade of the windows, which must not be, in any case, far away more than one metre and a half, because the Phalaenopsis need a light of 10.000-25.000 lux (the lux is the unity of measure for the light), depending on the age and the stage of growth.

The Americans suggest, pragmatically, to the amateurs, the same luminosity required for the well known African Violet (Saintpaulia ionantha).

They are epiphyte, that is, plants which grow up, like the mistletoe, on the trunk or on the branches of the trees. They are, usually, to be placed in a mixture of barks of pine, coarse peat and fragments of fibre of osmund; but some suggest other supports like the “mineral wool”.

Usually, there are no major problems: during the night , the best temperature should be of 18-20 °C, and, during the day, to fluctuate between 25 and 28 °C; values which, generally, are reached, in summer, in open air. The winter period is more critical, as the radiators dry up the air, and the Phalaenopsis need at least the 60% of relative humidity.

How to do? It’s simple. It is sufficient to create, around the plant, a humid micro climate, leaning the small pots on rather high small plates, or small goblets with one flat side, to be hung on the wall, with some expanded granulite, or some gravel. You will pour, every now and then, some water, paying attention that the bottom of the pots and the roots don’t drown in the liquid, which must be at least a couple of centimetres lower.

Usually, the 10-12 cm pots are to be watered 1-2 times a week, depending on the air temperature, whilst the larger ones, every 7-10 days.

It is better not to sprinkle the leaves, or, in case, just in the morning, thus giving them all the necessary time for drying up.

The best thing is a little calcareous and slightly acid water, like the rainy one, which, in the wind, flows down along the trunks of the trees; but also tap water is good, provided that we eliminate the chlorine, leaving it resting in a bottle, for at least 24 hours.

When the Phalaenopsis are watered too much, or not enough, the symptoms are alike: yellow and dampish leaves.

The best thing is a low dosage liquid manuring every 15 days. We have to moisten the rind, so that the product does not slide away, and then we apply, in the dilution of half gram per litre, a fertilizer of the type 24/12/12, that is, composed of 24 parts of nitrogen, 12 of phosphoric acid and 12 of potassium. The firm Vacherot sells a very balanced one, 12/6/6, with additions of oligo elements; but, in case, even a normal “fertilizer for green plants”, rich of nitrogen, is suitable.

The bacteria living on the bark, consume, in fact, a lot of it, and so we have to foresee a “surplus” for the plant. If, on the other hand, we use different supports, such as peat or mineral wool, a normal product, type 15/15/15, will suffice.

Even if the Phalaenopsis are sold in small containers, of 10-12 cm, clung to barks of pine and small tufts of peat, we have to resist to the temptation of changing them of pot.

The support must, in fact, dry up almost completely between a watering and another, and little of dryness is to be preferred to the rottenness caused by the stagnation of water in the big pots. As a rule, they are to be transplanted every two years, in spring, into containers slightly larger, till a maximum of 20 cm, for ten years old plants.

When increasing the diameter, we must, anyway, use bigger barks for a better circulation of the air. This is the opportunity for removing all the black roots, with dying or withered parts, and then, for some weeks, it’s good to expose the small pots to a dim light.

The tutors which sustain the stems can be, on the contrary, taken away at once. They are of use only for the industrial cultivation in greenhouses, and for the transportation, as the pleached or falling branches would be an obstacle.

Sometimes, it is very simple. On a branch, or on the sides of the old plants, a “keiki” (word which in Hawaiian means “child”), can come out, and then it’s sufficient to take it off, delicately, with its roots.

Exceptionally, we can also proceed to the “beheading” of the old plants.

When a 6-7 years old specimen has become very tall, they suggest, in fact, to cut at half the stem, and to place in pot, as usual, the head with at least four leaves and some roots.

The new plant will have to be kept in dim light, while from the old base might come out even 3-4 new floriferous branches.

For lovers, the firm Vacherot sells, for about 100.000 Liras, all what is necessary for the reproduction in vitro. Containers and nourishing gels with the relevant instructions.

The seeds of the orchids are, in fact, very small, without alimentary reserves, and, for growing up, would need a microscopic symbiont fungus. In cultivation, they use therefore, as “feeding bottle”, instead of land, a special nourishing substance.

You can amuse yourselves in creating new hybrids, transporting with a toothpick the pollen masses of the plant chosen as father, on the stigmas of the mother plant. After about one month, there will come up a sort of “string bean”, containing the seeds, which opens when ripe, usually eight months later.

The plantulae will have to live for 8-10 months in a bottle, with two transportations to thin out and select the best specimen. Then, finally, the small plants of 2-5 cm with the roots, will have to be placed in pot as usual, and will blossom after about a year and a half.

If we want, quickly, specimen identical to the parents, we have no option than the vegetative way: the cultivation by merystems. The professionals take off the “eyes”, on the branches, and cultivate them under glass in a special gel; for amateurs it is simpler to effect some “mini cuttings”. It suffices to take off some fragments of 2-3 cm of branch with an “eye”, and to place them in bottle , in the same gel, as for the seeds.

Generally, the Phalaenopsis are robust plants, and, if attacked by aphids and cochineals, can bear the usual insecticides. More serious are the bacteria and fungi infections, which happen when the ventilation is not good, the temperature is too low, or the water stagnates on the leaves and on the flowers.

Phalaenopsis : the easy orchid which grows up well at home was last modified: May 23rd, 2019 by Giuseppe Mazza