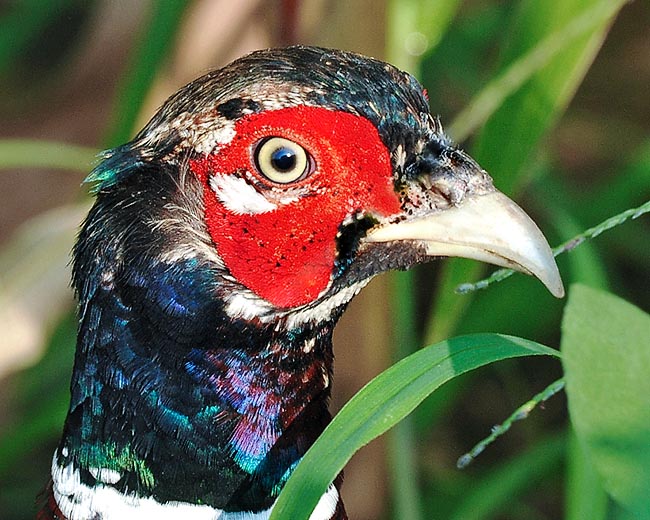 After the scientific name, the Common pheasant (Phasanius colchicus) should be native of the Caucasian area © Gianfranco Colombo

The Common pheasant is maybe the only ascertained case of diffusion in all the continents of the planet, of an animal species for simple ludic purposes.

Better, it is also the only case where their bitter enemies, that is the hunters, have become themselves those who have supported, favoured and helped this diffusion.

And with such a success!

Omitting any evaluation about the correctness of introducing alien species in new territories, topic that has caused in these times ample debates on the damages caused by these rash entries, it is to be considered that the success has been remarkable and the environmental impact has resulted to be absolutely insignificant.

The massive introduction of this species has had an acceleration during the last two centuries but already a couple of millennia ago occurred the first signs of this methodical operation that presently sees the massive presence of this species in all continents.

All began with the mythological mission of the Argonauts in Colchis, the present Georgia, led by Jason looking for the Golden fleece and place of origin of this bird. Here they met this magnificent bird and they were so much fascinated that they took it with them when returning to Greece.

Then came the old Romans in their maximum imperial splendour who began a strong interest for this bird and being excellent gourmets, they did not forget it for some century to come.

In the Middle Ages, great advocate of this introduction was the European nobility that considered the flesh of this bird more valuable than others and had adopted this food as regular presence on any court table. Later on, also the common people had access to this meat, through a form of breeding as well as through the poaching in the nobles estates, even if this was heavily fought.

Finally, during these last centuries the English hunters were those who rediscovered this game. 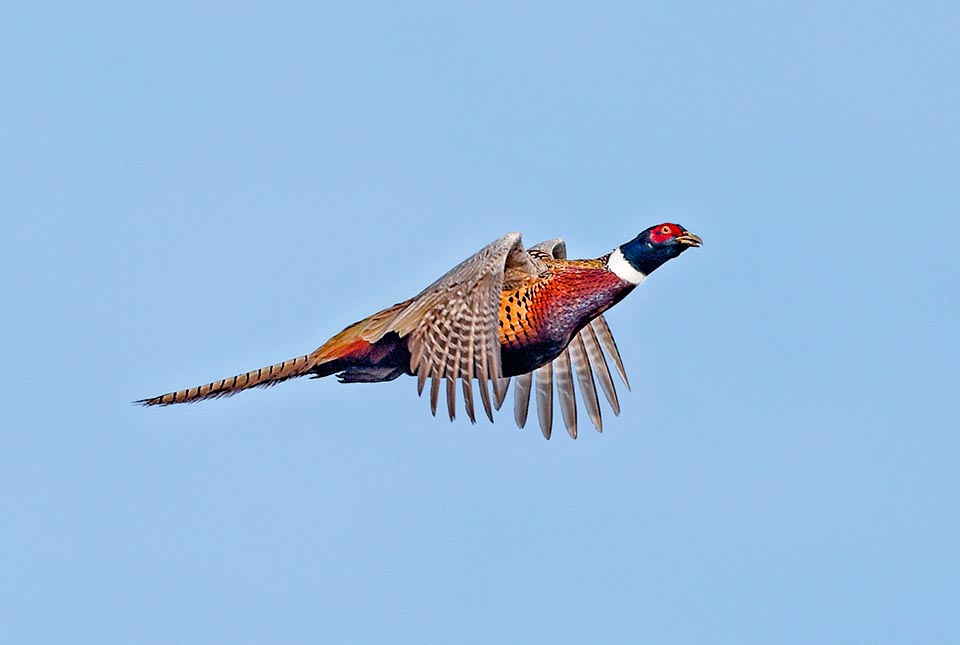 Flying male. It’s the classical hunters prey, but it’s quite them that breeding it have diffused it all over the world © Gianfranco Colombo

Large and coveted game as well as shrewd and able to escape dangers, it became one of most wished subjects in the hunting activity of every hunter of that time, with the systematic introduction in their hunting reserves, of a very prolific and also not migratory and eagerly attached to its birth place.

The Common pheasant (Phasianus colchicus Linnaeus, 1758) belongs to the order of the Galliformes and to the family of the Phasianidae, a group that includes birds having a very coloured livery and at times quite spectacular in their beauty.

The scientific binomen has a purely geographical etymology, a toponym in the genus as well as in the species. “Phasianus” from Phasis, the old name of present river Rioni flowing in Georgia, site where the Argonauts met this bird for the first time and “colchicus” from Colchis, rightly the old name of that Caucasian region that later has become nowadays Georgia.

In Europe it is called Common Pheasant in English, Jagdfasan in German, Faisán Vulgar in Spanish, Faisan de Colchide in French, Faisão in Portuguese and Fagiano comune in Italian. 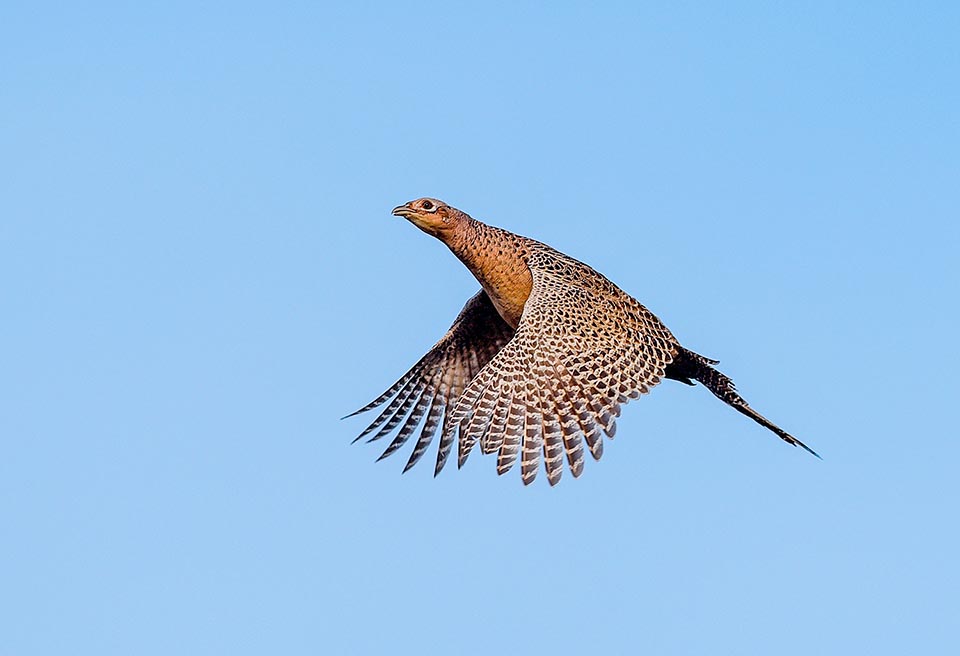 The Common pheasant is now so diffused in all continents to lead almost to forget what is its origin land.

The scientific binomen confirms however that this bird is native to the Caucasian and Central Asia area in a belt reaching Mongolia and probably even further far away.

In Europe it is present since at least a couple of millennia, with a continuous expansion that has made the diffusion area to totally saturate the habitats suitable for the permanence of this animal. It practically occupies all the European continent excluding Spain and the extreme north of the Scandinavian peninsula.

In Asia, besides its native area, it occupies most of China and of the Siberian area close to the Pacific Ocean. 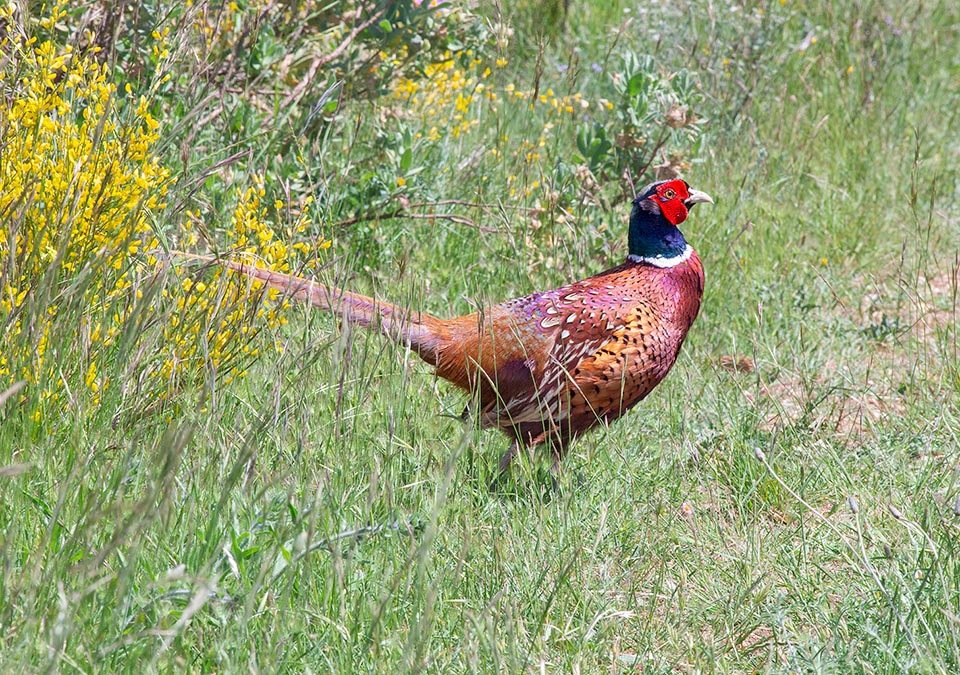 Here it is, majestic, ready to defend its territory from the rivals. In nature it has a small harem and loves the dry sites with little water and a good shrubby cover © G. Mazza

The versatility of this strong bird has favoured it in accepting various types of habitats at times very different from the native ones, for the typology of the environment as well as for the temperature and the weather conditions.

The Common pheasant, though being a bird that very well adapts to the dry places with little water and a good shrubby cover or small shady and isolated woods, has found in the new sites a new collocation in humid areas with dry reedbeds, intensively cultivated areas, hay meadows and more than any other the monoculture expanses of corn and soy and industrial poplar groves.

Although being a purely terrestrial animal, it loves very much the areas with small prone and with low branches close to the soil trees, where to spend the night perched.

In these locations it has found shelter, food and possibility to reproduce with success so much to become the most diffused galliform in these territories. 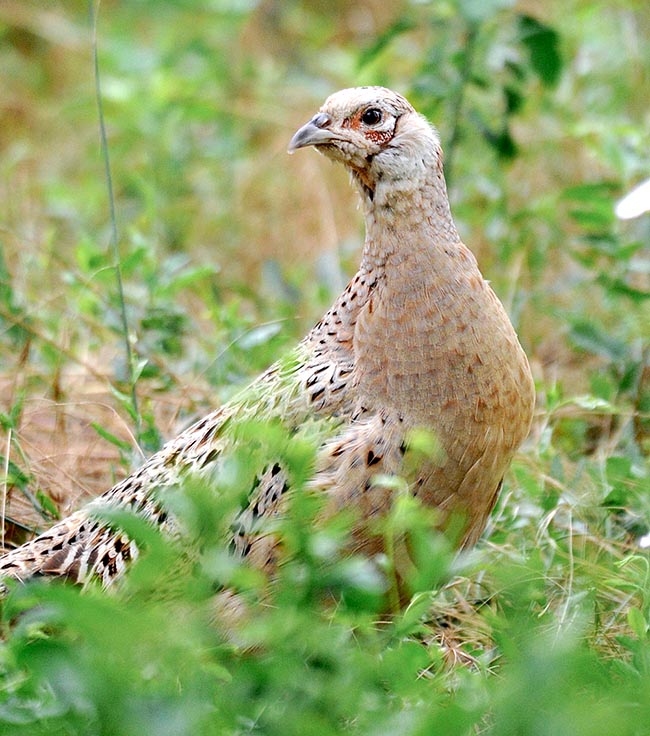 In many of these areas, where hunting is permitted, the population reduces considerably during the game season, leaving only isolated populations in the protected areas and in the hunting reserves, where this bird is bred intensely rightly for gaming purposes. The populations reconstitute themselves only on the following season, with new introductions and relevant reproductions.

As typical in the galliforms, the male of this species displays a magnificent livery well different from that of the female that conversely is typically greyish brownish with hues and mottles that render it extremely camouflaged and a tail only a twenty centimetres long.

As nesting on the soil, the female must necessarily know how to hide and blend with the surrounding environment, in way not to be discovered while engaged in hatching.

On the contrary, the male must display to the female its beauty in order to conquer it but also as deterrence towards the competitors who are very bellicose and territorial.

It is worth remembering the fight of the bantam cocks, the national sport in south-eastern Asia that exploits precisely that aggressiveness these birds show during the period of mating.

The male has a very complex livery and displays such a variety of colours and reflections that it would be quite difficult to describe in detail. The head is bluish/greenish with two small auricular tufts of the same colour that are erect when excited or alarmed. On the cheeks are present two ample featherless areas of fiery red colour with hanging wattles, with embedded within pearly white eyes. Also the beak, robust, hooked and pointed, has the same colour.

The body is covered by an infinite number of feather shaped like big scales that reduce in dimensions on the chest, of golden orange colour, edged in black, with changing reflections, depending on the reflection of the light. On the neck, a very white collar that subdivides the blue of the neck and the golden scales of the body. The tail, of intense brown colour barred in black, is very long and can reach the length of 50 cm. The legs are very robust and armed with a bony spur, pointed and robust, typical of scratching about birds but that are also used in the fights. 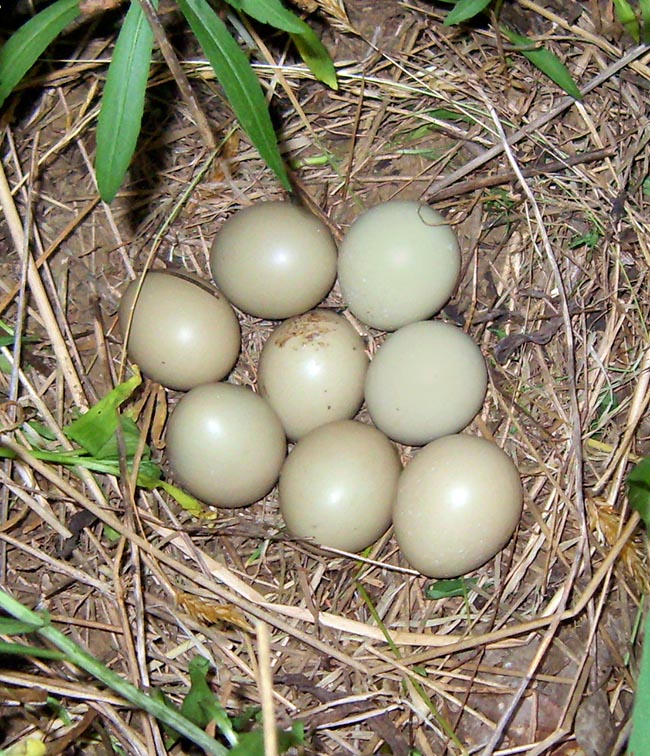 The pheasant nest is a slight dip in the soil, covered by dry and morbid grass, with even 15 eggs © Museo Civico di Lentate sul Seveso

In this way they have obtained colourations at times exasperated such as the so-called dark pheasants, the isabelline, with white or missing collar, with ash-coloured heads and with ashen rumps.

A real mixture between the groups of Phasianus colchicus, Phasianus torquatus and Phasianus versicolor.

The dimorphism between the genera interests also the dimensions of this bird.

The wingspan is rather reduced with about 90 cm, being a typical sedentary bird equipped with wings short and stocky but extremely strong and brawny, good for sustaining a remarkable weight and enabling it to reach a considerable speed when flying.

Typical is the fluttering when leaving often accompanied by a sharp cry of alarm that can be heard at a considerable distance. The pheasant is anyway unwilling to fly away, as it prefers to run frantically at a remarkable speed, so much to be able often to get off even if facing a hunting dog and even more a human being.

The male is polygamous and creates a small harem it cares and defends fiercely.

As previously mentioned, the combativeness of this bird sees it often involved in severe fights with other males it tries to send away whenever a competitor gets close to its territory.

The females choose independently the site where to place the nest, the hatching and the care of the small nidifugous up to their maturity. The male is in charge only of the territorial defence and the control and the presence of eventual predators.

The nest is a slight dip in the ground covered by dry and soft grass, hidden at the foot of a bush, of a trunk, between the branches of a fallen tree or in a dry reed bed. 10/15 green grey or even beige eggs, without any speckling, are laid, and are hatched for 4 weeks.

The small nidifugous come to life equipped with a soft down that allows them to leave immediately the nest and go around together with their broody hen in the nearby thicket. The dangers for this brood are many and many will be the juveniles that will not reach the maturity because of foxes and rats, of diurnal and nocturnal birds of prey but also grass snakes and various accidents. Incredible is the capacity these small birds have to be able to do, in case of terrestrial dangers, short flights even if almost totally devoid of a complete livery. 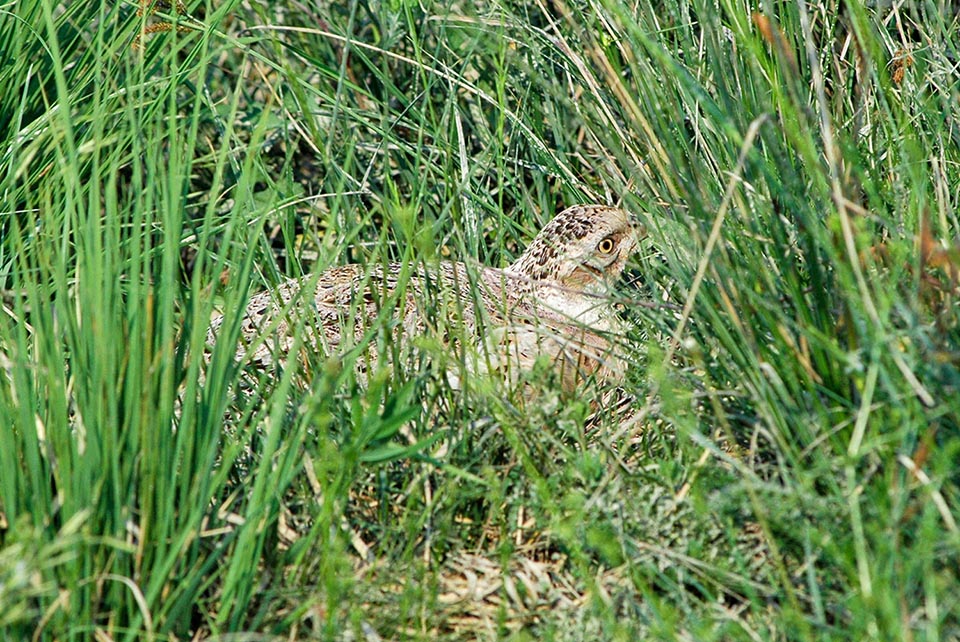 The diet of the Pheasant is purely granivorous, in particular cereals and big seeds, but it does not disdain to complete the diet with fruits, buds, insects and even small reptiles.

The pheasant hunting is one of the most frequent activities in the western world. In Great Britain this activity is celebrated every year, since the first half of the XIX century, on October 1st, date of the beginning of the hunting season. The number of the specimens killed is enormous, they are talking of various tens of million of heads, as equally great is the number of specimens released by specific breedings, rightly for this activity. Also the local merchants show for sale in this period, huge quantities of pheasants for a culinary use that has taken hold since several decades. However, the populations of this bird have now consolidated and do not show any sign of subsiding in none of the considered areas.

Wonderingly have been reported cases of alleged males that have laid eggs regularly hatched up to the brood but it has been then verified that these were rather occasional cases of females that had, for strange biological reasons, the livery of the other sex.