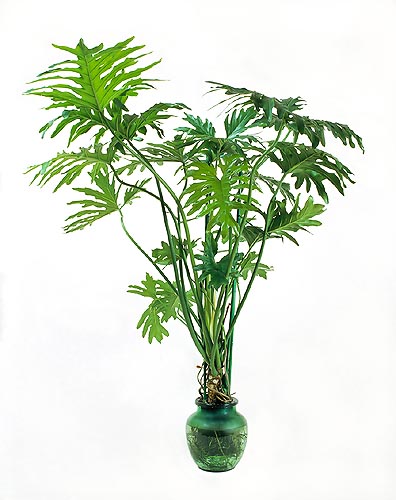 It adapts also to the hydroponics cultivation © Giuseppe Mazza

The Philodendron bipinnatifidum Schott ex Endl. (1837) is native to the humid forests of South America (Argentina, Brazil, Bolivia and Paraguay).

The name of the genus is the combination of the Greek wordings “philos” = friend and “déndron” = tree, with reference to the usual climbing appearance of the plants belonging to this genus, the name of the species is the combination of the Latin words “bis” = twice, “pinnatus” = pinnate, and “fidus”, coming from the verb “findere” = to divide, with reference to the form of the leaf.

Perennial evergreen plant, it forms a fleshy stem, which becomes semi-woody with the age, with a diameter of 8-12 cm, on which the scars left by the fallen leaves are evident, tall up to about 2 m, with various aerial roots, which contribute in keeping it erect, later on, due to the weight of the numerous leaves, it tends to bend towards the ground; in the wild, it can reach superior heights in presence of trees on which to lean.

The leaves, on a long petiole, are of an intense glossy green colour, deeply carved, 70-90 cm long, and 40-50 cm broad, with 10-12 segments per side, lobed and irregularly bilobate, waved on the edges.

The inflorescence is formed by an about 25 cm long cream-white spadix, surrounded by a rigid spathe, green outside and inside cream; the flowers are protogynous unisexual (the female flowers are receptive before the ripening of the male flowers, thus avoiding self-fertilization), placed at the base of the spadix, with the female flowers occupying the lower part and the male the upper one; the pollination takes place thanks to scarabs attracted by the smell issued by the spadix and by the contemporaneous increase of the temperature. This one lasts about 34 hours, with a peak late in the afternoon of the first day, with an increase of about 18°C in the temperature as to the local one.

The fruits are cream ovoid berries, about 1 cm long. It usually reproduces by division, air layering and portions of stem, as well as by seed.

Very ornamental plant, due to its typically tropical look, it can be cultivated in open air, in full sun or slight shade, in the tropical, subtropical and warm temperate regions; it is not particularly demanding about the soil, and can bear temperatures of -2/-3°C, with damage to the leaves, and can vegetate again at the base with lower temperatures up to about -8°C, even if losing the whole aerial part.

It is also cultivable in pot for indoor decoration on a porous substratum, draining and rich of organic substance, in very luminous position; watering must be frequent, but without stagnations, in summer, reduced in winter. It adapts also to the hydroponics cultivation.