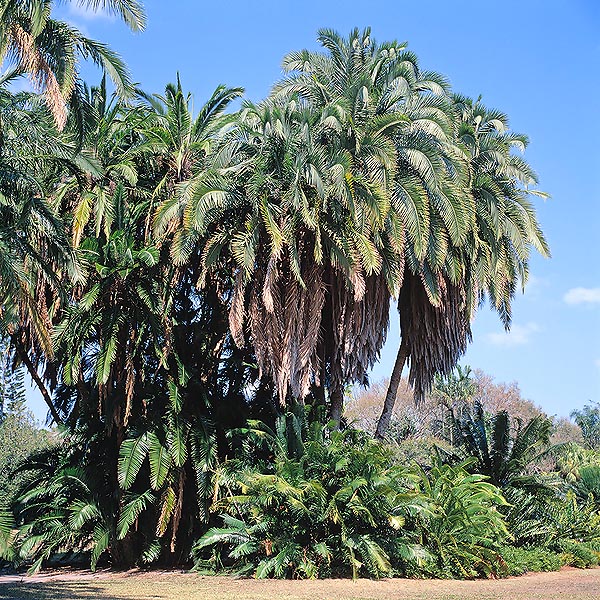 The Phoenix reclinata Jacq. (1801) is native to a vast area of tropical and subtropical Africa, Comoro Islands, Madagascar and south-western Arabian peninsula. It grows in an ample variety of habitats, from the rainy forests to the semi-arid savannas, from the sea level to about 2.500 metres of altitude.

The name of the genus is the Greek name which was given in the ancient times to the date palm (Phoenix dactylifera); the Latin name of the species “reclinata” = bent, refers to the bending of the leaf extremity.

The plant, cespitose, is characterized by thin trunks, on the average of 13-15 cm of diameter, tall up to 12 metres and elegantly arched, but the central one, on which are well visible and spaced out the scars of the foliar bases. The trunks are smooth and run through by vertical cracks, excepting a zone of about 1,5 metres under the crown where persist, for some time, the remains of the foliar petioles which later own separate spontaneously. The leaves are long about 3 metres and give an image of a rather ruffled lightness; the terminal part is elegantly and abruptly turned downwards, characteristic from which comes the name of the species. The leaflets, long about 25 cm in the median part, are rigid, sharp, of a glossy green colour, reduced to thorns at the base.

Dioecious plant (each individual carries only male or female flowers), it produces very ramified inflorescences between the leaves, which are followed, in the female plants, by ovoid fruits long about 18-20 mm of orange-yellow colour. It reproduces by division or by seed, which germinates in about two months; it readily hybridizes with the other Phoenix .

Its hybrids are often present in cultivation, they, however, have a high ornamental and landscape value, especially when their appearance is close to that of the species; it can be cultivated in areas with tropical, subtropical and warm temperate climate, in full sun and in a wide variety of soils. The resistance to low temperatures of the pure species is not high (around -3 °C), greater than the one of the hybrids.