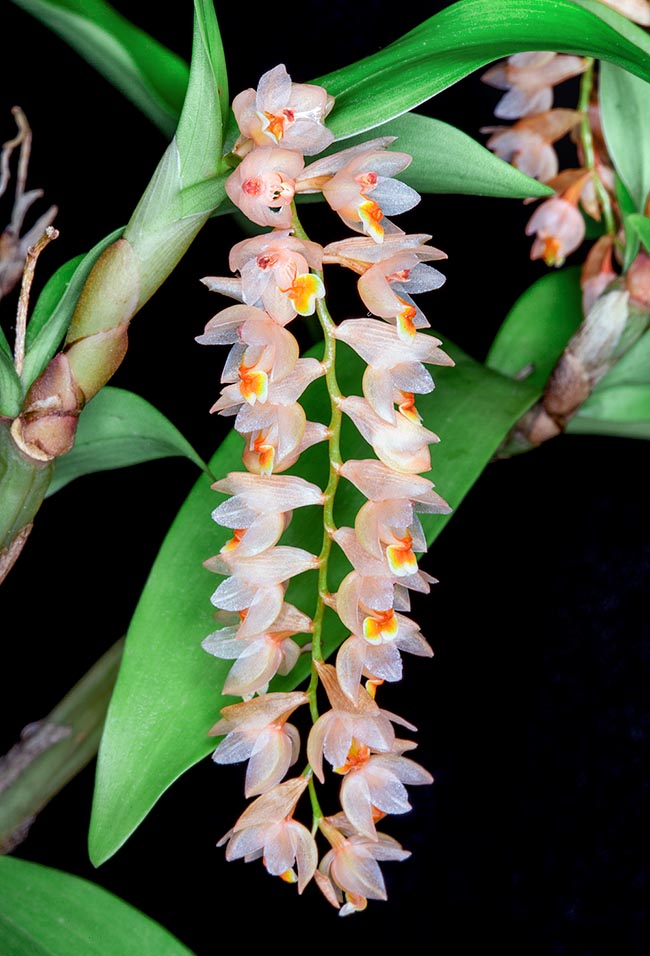 South-East Asian epiphyte or lithophyte, the Pholidota articulata is an orchid with medicinal properties © G. Mazza

The species is native to Bhutan, Cambodia, China (Guizhou, Sichuan, Xizang and Yunnan), India, Indonesia, Laos, Malaysia, Myanmar, Nepal, Thailand and Vietnam where it grows in the forests on the trees or on the rocks between the 200 and 2000 m of altitude.

The name of the genus comes from the Greek adjective “φωλιδωτός” (pholidotos) = scaly, covered by scales, with reference to the sheaths that surround the pseudobulbs; the specific name is the Latin adjective “articulatus, a, um” = articulated, with reference to the pseudobulbs that develop, one after the other, from the apex, or close to the previous one.

The Pholidota articulata Lindl (1830) is an epiphyte or lithophyte species with bifoliate pseudobulbs arranged one after the other, at times ramified, almost cylindrical, grooved, 5-15 cm long and of 0,5-1,2 cm of diameter, rooting at the nodes, covered by wide 0,2-3 cm long sheaths. Leaves from the apex of the youngest pseudobulbs, obovate-elliptic with acute or obtuse apex, membranaceous, with prominent veins, 7-15 cm long and 2,5-6 cm broad.

Racemose inflorescences hanging from the apex of the new psudobulb, 15-18 cm long, with zigzagging rachis. Numerous flowers of white or greenish white with pink shades colours, fragrant, subtented by bracts, deciduous during the blooming, oblong-elliptic with acute apex, 0,5-2 cm long and 0,3-1 cm broad, brownish; 0,6-1 cm long pedicel and ovary. Sub orbicular to elliptic dorsal sepal with obtuse apex, concave, keeled, 0,6-0,9 cm long and 0,2-0,4 broad, ovate lateral sepals with acute apex of similar size, keeled. Ovate to oblong-lanceolate petals with obtuse or acuminate apex, 0,5-0,7 long and 0,2-0,4 cm broad, oblong cymbiform (shaped like a boat) labellum with a narrowing in the central part, 0,4-0,8 cm long, with bilobate apex having a yellowish spot and 5 longitudinal gills pinkish at the base. 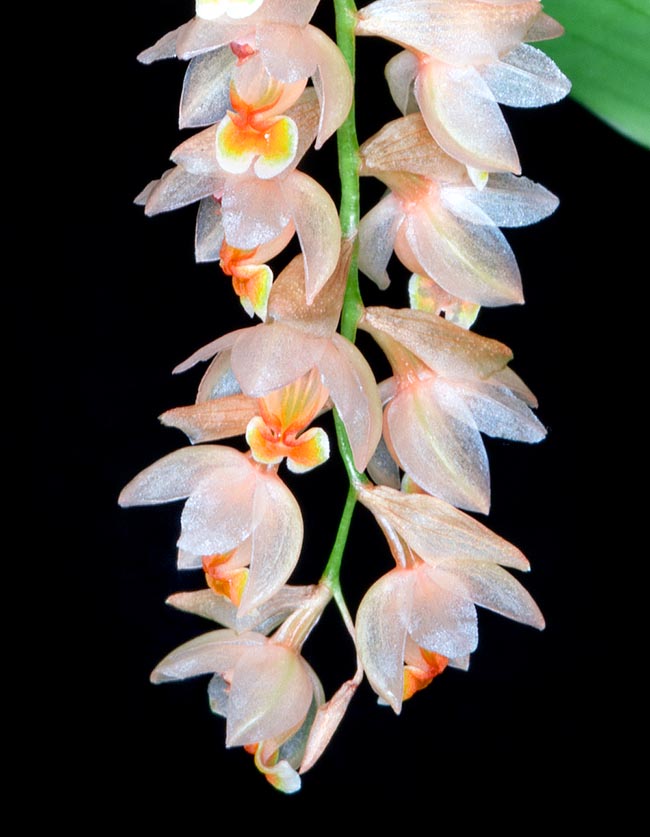 It reproduces by seed, in vitro, and by division, with each section provided with at least 3-4 pseudobulbs.

Species with characteristic and unusual modalities of growth, distributed in a vast area and in an ample interval of altitude with climatic winter conditions cool to warm, with lowest winter temperatures not under the 10 °C, high humidity, 60-70 %, constant ventilation and partial shade.

It can be mounted on pieces of bark, or rafts of cork or of roots of arborescent ferns lined of sphagnum to keep the humidity at the roots, or cultivated in pot utilizing a perfectly draining and aerated substratum that may be formed by finely cut bark fragments and charcoal with addition of sphagnum.

Watering frequent in summer during the growth of the pseudobulbs, spaced in winter and gradually increased upon the vegetative restart signalled by the emission of the new roots, utilizing rainwater, by reverse osmosis or de-mineralized.

Parts of the plant are utilized in the traditional medicine, in particular Indian, in the toothache, in the digestive troubles and in the care of the fractures, laboratory studies have confirmed the efficacy in caring the bones, as well as the anti-inflammatory and antimicrobial properties.