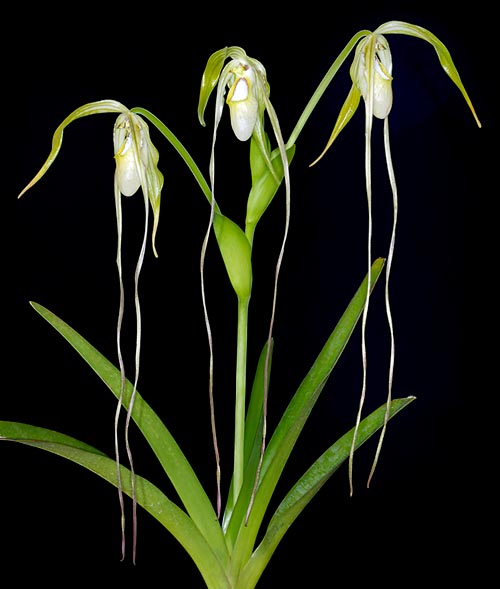 The species is native to Colombia and Ecuador, where it grows on rocky slopes covered by moss between the 600 and the 2500 m of altitude.

The name of the genus is the combination of the Greek terms “phragma” = division and “pédilon” = sandal, with reference to the ovary divided in three cavities (trilocular) and to the shape of the labellum; the species is honoured to the Polish botanist Józef Warszewicz Ritter von Rawicz (1812-1866).

The Phragmipedium warszewiczianum (Rchb.f.) Schltr. (1922) is an epiphytic or lithophytic herbaceous species, caespitose, with short stem wholly hidden by the imbricate foliar bases and 5-9 linear leaves, coriaceous, alternate, distichous, up to about 40 cm long and 3-5 cm broad, of pale green colour.

Terminal inflorescences, 40-60 cm long, carrying 2-4 flowers opening at the same time with greenish-white sepals with dark green venations, petals from reddish to greenish brown and white-pinkish labellum with darker venations; the flowers are long-lasting, one month and even more.

The sepals are lanceolate (the two lateral ones are united forming one only sepal, called “synsepalous”, behind the labellum), 10-12 cm long and about 2 cm broad, with wavy margins, the petals, linear, 40-60 cm long and 0,5-1 cm broad, hanging, and finally, the labellum, saccate, with the margins curved inwards, and 5-7 cm long.

It reproduces by seed, in vitro, and by division, with each section provided with at least 3-4 tufts.

Species with a showy flowering, due to the long hanging petals, of relatively easy cultivation, it requires intermediate temperatures, 14-16 °C by night and 24-28 °C by day, high luminosity and humidity, 50-70%.

The waterings must be regular and abundant during the vegetative period, leaving to almost completely dry up before giving water again, preferably during the first hours of the day, in way to allow the water to dry up, in order to avoid stagnations at the axil of the leaves, and the air constantly moving, as in conditions of scarce ventilation, in particular in summer with the high temperatures, it is easily subject to rottenness. 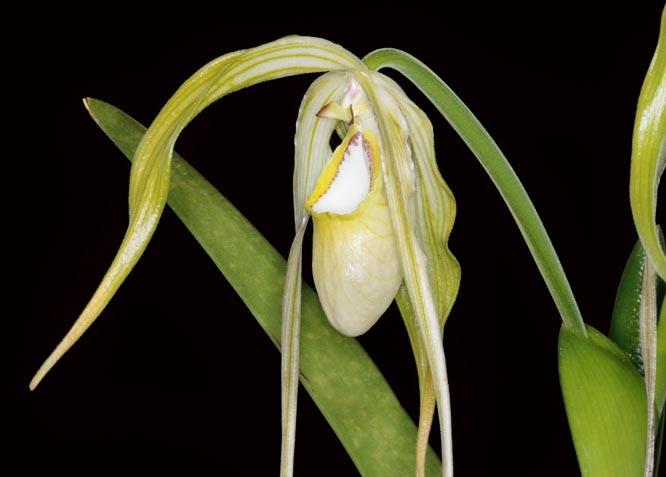 In winter, waterings are to be reduced but without allowing drying up completely, and the luminosity to be increased, also direct sun during the first hours of the day. Waterings and nebulisations are to be done with rain water, or water obtained by reverse osmosis or demineralised, and the fertilizations, during the vegetative period, with hydro-soluble balanced products, with microelements, at ¼ of the dosage, or less, suggested on the package, distributed and alternated in way to avoid salts accumulation at the roots, to which the species is particularly sensitive.

The cultivation substratum can be formed by finely sliced bark fragments and by charcoal, with possible addition of sphagnum and agri-perlite; divisions and repottings are to be done by the end of the flowering, at the moment when the new vegetation does appear.