The Phrynosoma solare Gray, 1845 is an unusual flat lizard with short tail, rich of spiny scales, especially on the neck. Grey-brown with changeable patterns and colours, in the whole it recalls a toad, and in fact the name of the genus, Phrynosoma, comes from the Greek “φρῦνος” (phrynos) = toad and “σῶμα” (soma) = body, whilst the specific one, solare, comes from the Latin adjective “solaris, e” = solar, with reference to the long spines starting from the head similar to solar rays.

It is present in USA (Arizona and New Mexico) and in Mexico (Desert of Sonora, Sinaloa and Baja California).

The Phrynosoma solare lives in warm and arid environments, stony or sandy, with cacti and other xerophilous plants, in burning deserts where it spends the warmest hours of the day in dens dug in the sand. 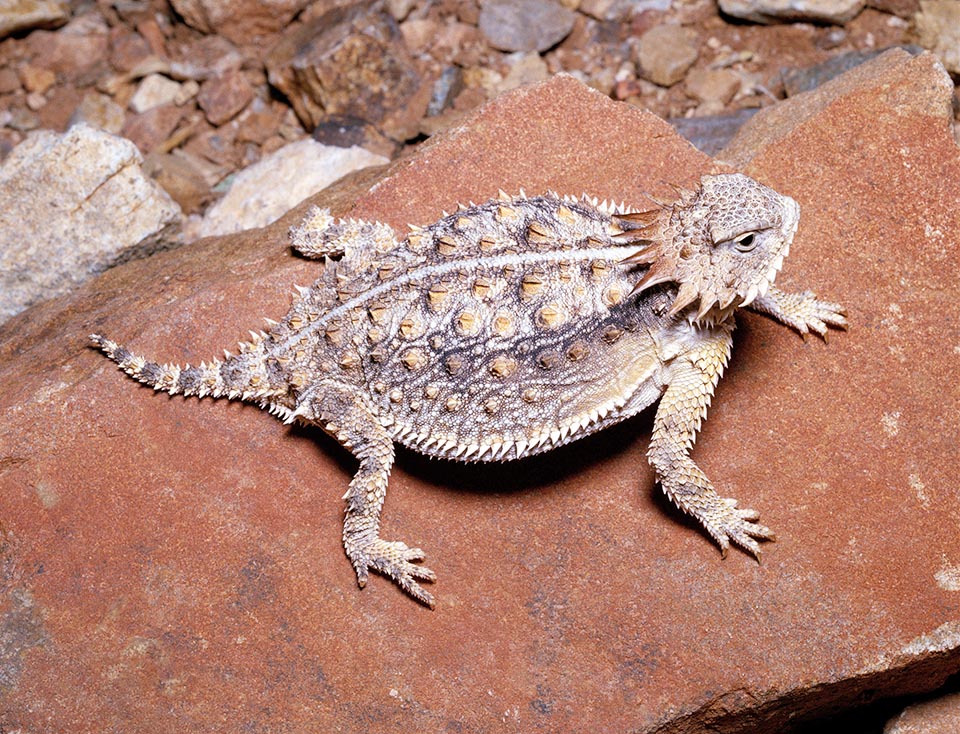 Phrynosoma solare in Sonora Desert. Short tail and showy defensive spines over the whole body. May be,at first sight, mistaken with a toad, as states the scientific name © Giuseppe Mazza

8-16 cm long, is completely protected by spiny scales that besides the head interest also the back, bristling with solid spikes, the sides, not less prickly and even the legs and the tail. The livery displays a pale dorsal longitudinal band and, apart the spines, the background colour is changeable, like a chameleon or the Anolis, depending on the mood and the environment.

As it easy to imagine, seen the environment, it is a species active in the morning and in late afternoon when gets out from the den hunting insects, especially ants that devours greedily, even 2500 per meal.

When it is in danger, if it is so lucky to be on a sandy soil, it buries completely with rapid lateral movements of the body thus disappearing to the sight of the predator, something like when, in the warm winter days, emerges from the sand only with the head for warming up without any risk before interrupting the fasting. 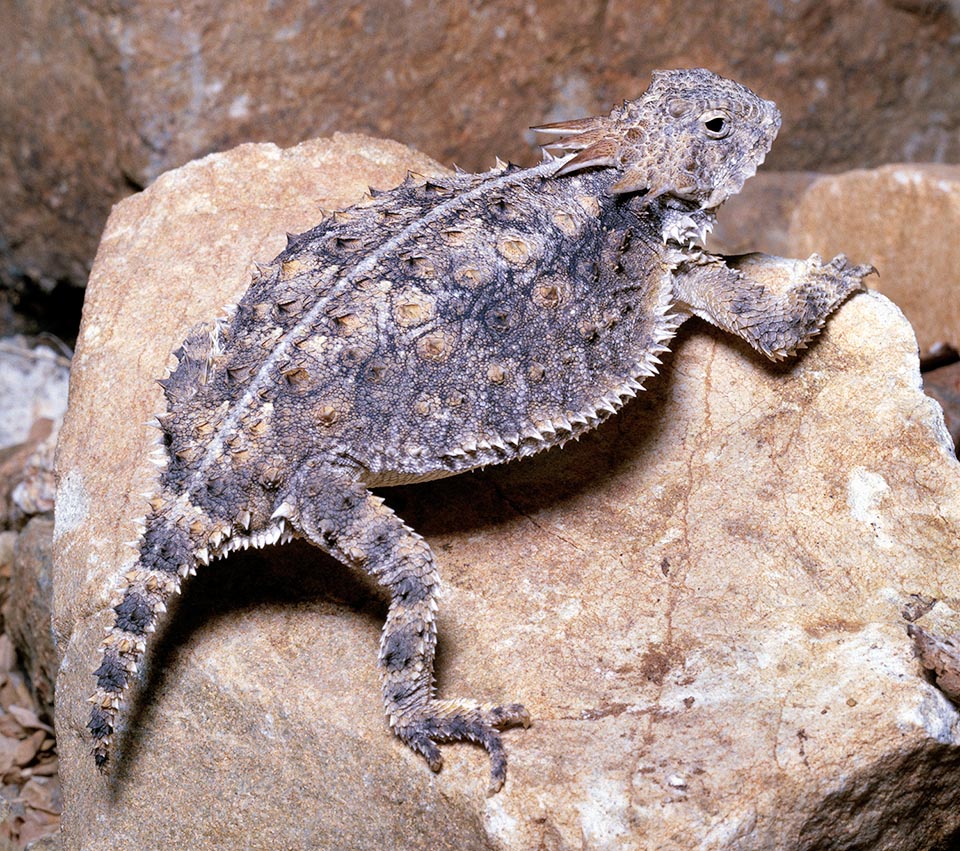 The same subject a few minutes later. It can bury in the sand, swell, squirt blood from the eyes or pretend to be dead but for living the first card to play is the mimetic one © Giuseppe Mazza

Otherwise, it inflates in order to look bigger, raising the spines and simulating down-head attacks, or squirts unpleasantly smelling blood in the face of predators, with impressive, repeated jets, up to 1 m of distance, that start from the pores of the lower eyelids and seem to get out from the eyes. If then also this expedient does not work, the last card to play is to stiffen pretending to be dead, and at times itgets away safely.

During the cold months the Phrynosoma solare hibernates underground. In spring it mates and during the summer the females lay 10-30 eggs in a sort of chamber-nest dug in the bottom of a tunnel, about 30 cm long, having the opening hidden by a bush.