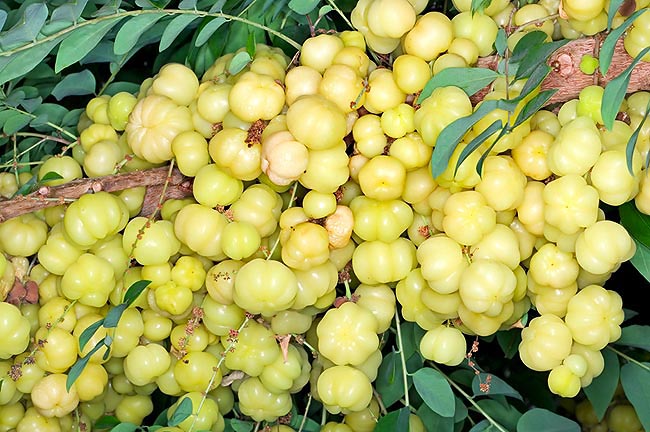 Of unsure geographic origin, the Phyllanthus acidus may be 8 m tall © Giuseppe Mazza

The exact place of origin is unknown; some think it’s Brazil, others, Madagascar or South-Eastern Asia.

The name of the genus is the combination of the Greek words “phyllon” = leaf and “anthos” = flower, with reference to the flowers which, in some species belonging to the genus, spring up on the flattened stems (cladodes), similar to leaves; the Latin name of the species, “acidus” = acid, refers to the taste, definitely sour, of the fruits.

The Phyllanthus acidus (L.) Skeels (1909) is a shrub or a small deciduous tree, which may reach about 8 m, with a trunk, at the base, of 15-18 cm of diameter, with a grey-greenish, fissured, bark. The crown is thick, formed by gnarled, bare, branches with at their apex groups of rather thin branches, up to 30 cm long, carrying alternate elliptic leaves with pointed end, of a green colour, slightly glossy on the upper side, bluish-green below. The leaves are up to 7 cm long, on a short petiole, and placed on two rows which give the impression of one compound leaf only. The flowers, male, female and at times hermaphrodite, are united together in compound, 6-12 cm long, racemes, coming up in the terminal part of the leafless branches, rarely on the axilla of the leaves, and are small, 3-5 mm of diameter and reddish. The numerous and compact fruits, very showy in their whole, are waxy, roundish, with a diameter of 1-2,5 cm, slightly flattened on both sides, of green colour, pale yellow when ripe, and have 6 to 8 longitudinal ribs; the pulp (mesocarp), is watery and definitely sour; the endocarp is hard, with, inside, three cells usually containing two seeds each. 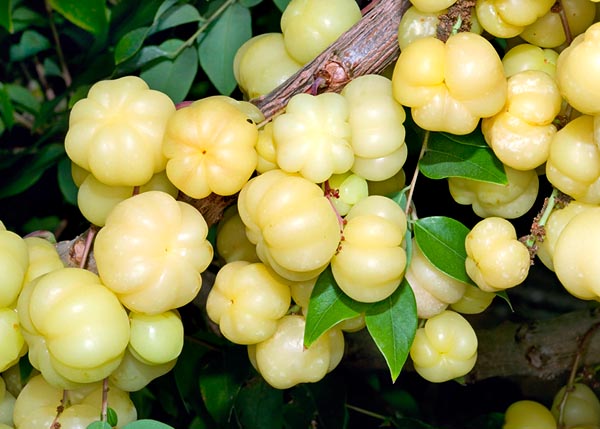 The very sour fruits may transform in preserves and sweets, once sugar is added © Giuseppe Mazza

It usually reproduces by seed, which germinates from one to four months, with the first fructification happening between the second and fourth year of age, but also by non-woody cutting, with a rather slow rooting, and by air layering.

Species which may be cultivated in full sun in the tropical and sub-tropical regions, it may stand, for a very short period, temperatures just below zero; it is not particular about the soil, provided the same is kept almost constantly humid. It is not cultivated commercially, but is widely utilized as ornamental plant in the private gardens and as road tree in the tropical zones. The fruits, with their particularly sour taste, when cooked with the sugar, assume a bright red colouring and are utilized for preparing preserves and sweets.

Locally, especially in Asia, this plant is variously utilized in the traditional medicine, the leaves decoction, for instance, is employed for treating hives, whilst the bark one treats the bronchial catarrh.

→ To appreciate the biodiversity within PHYLLANTHACEAE family please click here.