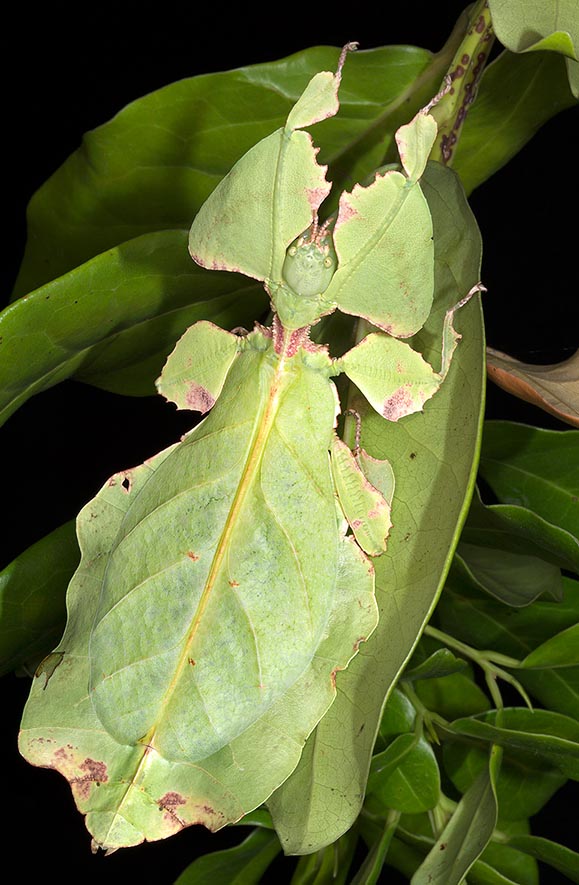 The Giant leaf insect (Phyllium giganteum Hausleithner, 1984), from the old Greek “φύλλον” “phýllon” = leaf and from the Latin “giganteum” = giant, is one of the biggest leaf insects of the world and the biggest species belonging to the genus Phyllium.

In France is commonly called the Phyllie géante, in Germany Das grosse Wandelnde Blatt, whilst in England Walking leaves or True leaf insect and in Italy, Fillio or Insetto foglia.

It belongs to the family of the Phylliidae and to the order of the Phasmatodea, from the Greek “φάσμα” “phasma” = ghost or apparition, to which belong about 2000 species diffused in all the world excepting Antarctica and Patagonia.

This order, less known than others such as, for instance, those of the coleopterans or of the lepidopterans, has always had the merit of getting close children, amateurs and/or simple onlookers of the fascinating world of the entomology. This thanks to the fact that all leaf or stick insects are herbivorous species, in particular phytophagous, that is nourishing of leaves; animals harmless to humans and easy to breed, seen that almost all do have vestigial wings and consequently cannot fly away. They give great satisfactions, especially to the children, because they can keep them in the hand, and extremely prolific seen that they reproduce by parthenogenesis.

Moreover, the leaf insect is one of the classical examples the science teacher or the professor of zoology utilize for describing the cryptism that, in most of the cases, is mistaken with the mimicry.

Actually, we talk of mimicry when a species mimics or imitates another species, like, for instance, the Milk snake (Lampropeltis triangulum – Lacépède, 1778) that imitates the Common coral snake (Micrurus fulvius – Linnaeus, 1766) whilst we talk of cryptism when one species imitates the substratum on which it lives, like for instance our leaf insect that is able to imitate and literally merge with the leaf hosting it, like the branches for the stick insect. Both mimicry and cryptism are strategies against predators.

Among the biggest stick insects of the world stand Dryococelus australis (Montrouzier, 1885), deemed extinct and then rediscovered in 2001, living in Lord Howe Island (island belonging to the Asutralian territory located east of Australia); the Spiny leaf insect (Extatosoma tiaratum Macleay, 1826) living in the Australian states of Queensland and of New South Wales and Heteropteryx dilatata Parkinson, 1798, living in the Malaysian Peninsula, whose bodies reach respectively the length of 15 and 20 and 25 cm. 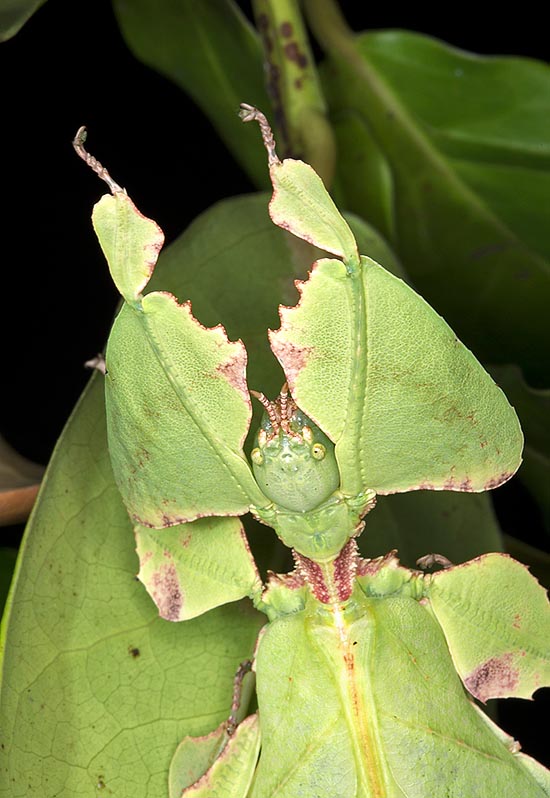 The adult imitates almost perfectly a leaf, even in the legs appendages © Giuseppe Mazza

The Giant leaf insect is a tropical species, native and diffused in Malaysia.

It lives among the leaves of the oldest rainforest forest in the world, Taman Negara, in the heart of Malaysia extending for about 4343 square kilometres. It is about 130 million years old and is formed by five layers of vegetation, formed (from the floristic point of view) by about 10000 vegetal species among which the trees belonging to the family of the Dipterocarpaceae, that form the canopy of the forest; the oaks, the numerous species of climbers and the laurels that form the intermediate layers and the ferns, that form the basal ones.

The adult imitates, almost perfectly, a leaf. As a matter of fact, the body is green, flat, foliar veins are visible and also the appendages of the legs have transformed simulating the margins of the leaf.

The cryptism the Phyllium giganteum has with the leaf is so incredible that the exoskeleton, as we have already said, of green colour, presents brown spots around the borders and two small brown dots in the upper part of the abdomen that simulate parts of a dry or rotting leaf.

The female can be 12 cm long, the antennae are short and rudimentary or vestigial wings. The male (whose existence has always been discussed seen that in nature is difficult to find them and in captivity alwasy females are born) has long wings, green and translucent, long antennae, has reduced size and also green body with the legs completely brown but leaner than the female. Conversely, the larvae or neanids are of brown colour, resemble the adult stage but are only 2 cm long and are very active.

When 7 months old the females reach the adult size and after 4 weeks are already able to spawn. The eggs, 8,5 mm long and 4 mm broad, black and glossy, similar to seeds, hatch after about 6 months of breeding and generate the larvae or neanids that in this first phase are brown. They partially look like the adult and are very active and delicate. 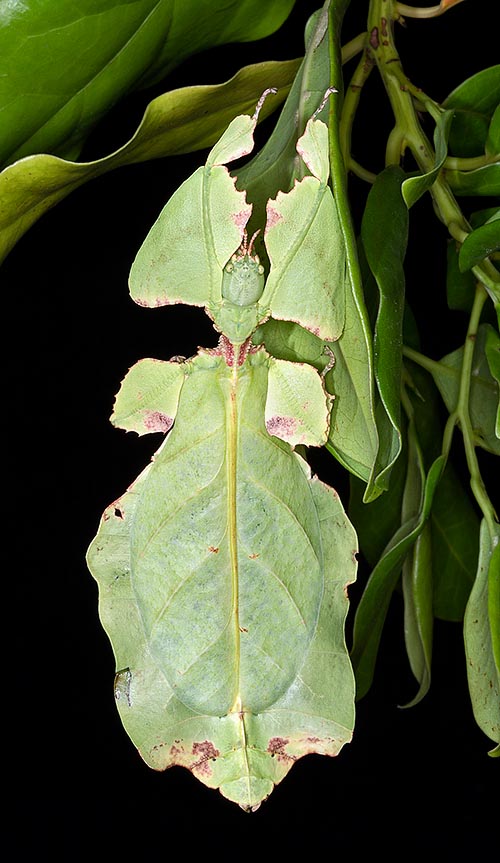 The female of Phyllium giganteum can be 12 cm long. The green body is flat and we note, besides the veins, brown spots simulating parts of dry or rotting leaf © Mazza

The Phyllium giganteum is phytophagous when at the larval stage as well as when adult. It leads its life trying not to be noticed by mixing among the leaves of the forest and nourishing of them.

After the first moult, the neanids assume progressively a greenish colouration and reach, as said, the adult size and the sexual maturity in the space of seven months. At this time the life expectancy of the females is of one year, whilst for the males it is only of a few weeks.
For the overwhelming majority of cases, the adults are females, this because the giant leaf insect reproduces by parthenogenesis: that is, the female lays unfertilized eggs that, once hatched, will generate female individuals exactly alike the mother on the genetic point of view.

Parthenogenesis is a reproduction method adopted besides other species of Phasmatodea da vari artropodi by various arthropods and not only by them. The disadvantage of this strategy is that the progeny, having the same maternal genome, will not be able to adapt to the environment in the case happen abrupt or sudden changes of the existing environmental conditions, whilst the advantage is that the female will be able to have a very numerous progeny, even if the male is absent. But seen that recently they have discovered a male, we cannot exclude, in nature, also the sexual reproduction.

Presently, the giant leaf insect is not threatened with extinction. In nature, it is an abundant source of feeding for all the insectivorous animals present in the forest such as reptilians, birds and mammals.

There are very few information about the giant leaf insect in nature (if it is predated, if it has other habits besides the described ones, etc.) whilst the same are very abundant when concerning its breeding. It is sufficient to have a glass case (it should be at least 3 times bigger than the length of their body and two times the breadth of their body), to maintain a temperature of 22-25 °C (even 30 °C if necessary), 60-70% of humidity and ventilation. As nourishment, are doing very well leaves of Rosaceae such as the bramble, but also leaves of oak or leaves of guava or of Indian pear.

It is essential that the giant leaf insect overcomes the first moult and that the neanids are not touched!

Once adult, they can be taken in hand, by the children too. For better information, you can refer to the PSG (Phasmid Study Group) where are useful information concerning the giant leaf insect as well as other species of stick insects.

Of paramount importance is that, if you no longer want to continue in breeding it, this is not released in the ambient, but given to the appropriate authorities (State Forestry Corps, Enpa, etc.). This by reason of the fact that, being this an exotic species, it might have a negative impact on our ecosystem. 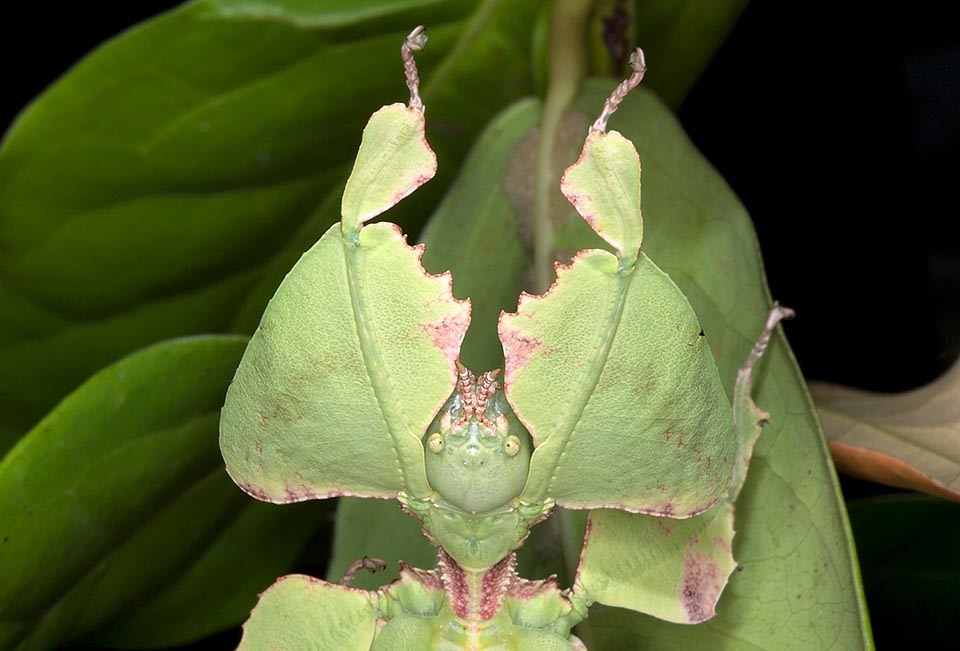 Phyllium giganteum is phytophagous, that is eats leaves, when larva and also when adult. Males exist, but are rare and live much less than the females. These usually reproduce by parthenogenesis, without being fecundated. The eggs 8,5 mm long and 4 mm broad, seem seeds and open after 6 months hatching © Giuseppe Mazza

The Phyllium giganteum male has been discovered and described only in 1994 by Paul Brook. Its only synonym is Phyllium (Pulchriphyllium) giganteum Hausleithner, 1984 and this is its complete name because, from the taxonomical point of view, it is attributed to the subgenus Pulchriphyllium even if for some it is matter of debate.