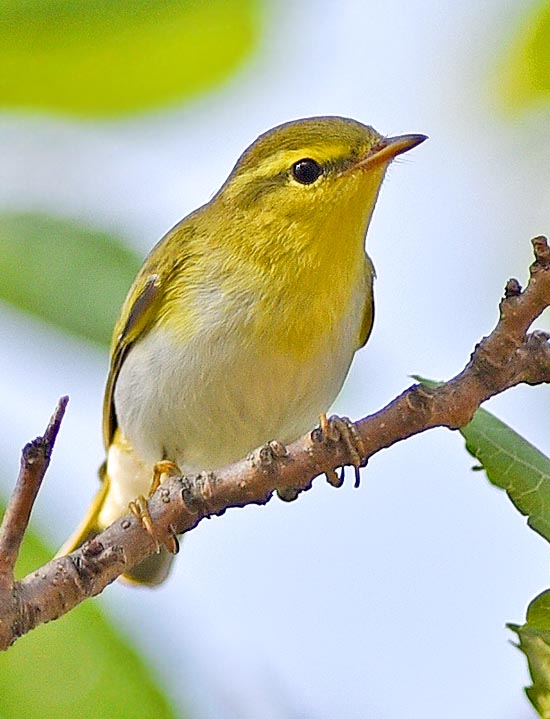 The wood warbler (Phylloscopus sibilatrix) is a typical inhabitant of the temperate boreal palearctic belt. Present also in Italy, in autumn migrates to Africa © Gianfranco Colombo

It is not easy to distinguish among them the about ten species of warblers that may be met in our countries, as the colour of the livery, the behaviour and often the habitats where they live, are widely shared. The Wood warbler (Phylloscopus sibilatrix Bechstein, 1793) is by sure the biggest one and in some periods perhaps also the most characteristic among its congeners. However it is not easy, in the faint light of a wood or hidden by the leaves of a branch, to be able to determine with precision this small bird that constantly hops among the leaves looking for food.

On the other hand, the etymology of the scientific binomen already describes it very well.

The name of the genus Phylloscopus comes from the Greek “phullon” = leaf and “skopos-skopeő” = to observe, indicating as main characteristic rightly that of looking relentlessly among the leaves looking for small insects, whilst the specific one sibilatrix means in Latin whistler, to point out its hissing but at the same time melodious voice.

Bechstein, its classifier, rightly took as reference this last characteristic to give the name to the species and to distinguish it from all others.

As a matter of fact there is no better way of classifying the warblers if not through their song. Fanciful theories of which each is one is the bearer may be advanced, we can look for those small morphological details typical of every species, we can interprete the small and different shades of colour but there is not any certainty on the classification of the warblers if not through their song.

Since always these small birds have been an intrigue for the scholars and in the mean time a headache for the passionate ornithologists but we must admit that identifying them at first glance on the field is always a problem.

Also some of the vulgar names given locally to this bird reflect the same issue. In French, Pouillot siffleur, literally whistling chick; in German Waldlaubsänger, the singer of the deciduous wood; in Spanish Mosquitero Silbador, whistling flycatcher; in Portuguese Felosa assobiadeira, the whistling warbler; finally in English, Wood warbler. 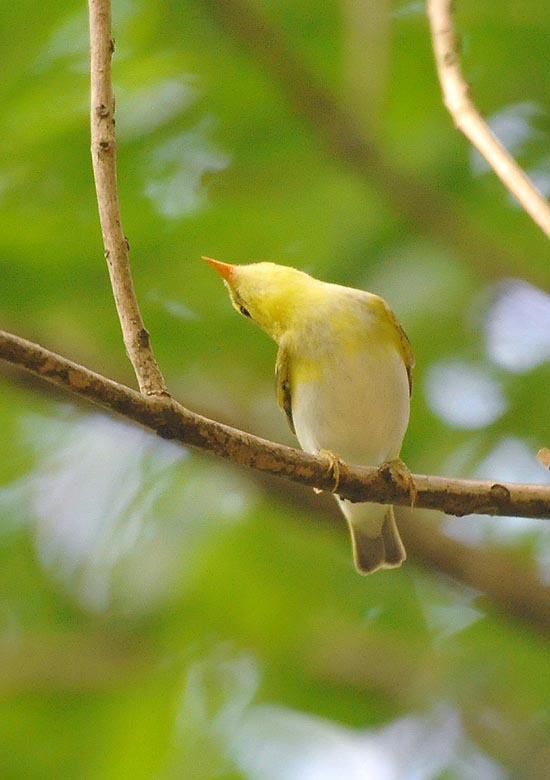 The name of the genus Phylloscopus means "that observes the leaves", often, like here in rather strange positions and unstable, to find possible preys among the leaves © Gianfranco Colombo

In the past centuries many ornithologists have been interested in this genus well knowing the very vast variety of species and subspecies that involved these small birds, all simlar and tiny.

It is sufficient to quote some names of those who have studied and then classified one of their own species, for understanding what richness is embedded in this grouping. From Pallas to Blyth, from Hume to Tytler, from Ijima to Brooks, then Radde, Tickler and Bonelli.

Therefore, there is no wonder if today, with the new techniques based on the DNA, we often face dramatic taxonomic upheavals.

The wood warbler is the typical inhabitant of the Euro-Asian boreal temperate belt. It occupies almost totally Europe north of the Black Sea up to the Ural mountains, toouching in the east in Asia, the former Soviet republics of Kazakhistan, Kyrgyzstan and going then southwards up to Iran, Iraq and Arabian Peninsula.

En Europe is absent in the Iberian peninsula, in the Mediterranean islands, in Ireland and southern Greece and in the northern part of the Scandinavian peninsula. It is a strong trans-Saharan migrant and gets to touch at the extreme south of its movements towards the winter quarters, the Democratic Republic of the Congo and Tanzania occupying of course the area north of this line up to the Sahara desert preferring more the western part of the African continent.

In Italy it is common in the cool hilly and semi-mountainous areas of the Alps and the Apennines at altitudes that may reach the 1300/1500 m in some valleys particularly protected and sunny. The migratory flow crosses Italy from late March to the whole May and then shows up again already from August up to October.

The wood warbler is a typical inhabitanbt of the thick and humid deciduous woods, in particular chestnut, oak and birches woods or also mixed woods with conifers even if only occasionally frequents pure pine woods. The underwood must be scarce or even absent, normally preferring small clearing of weeds or twigs and low shrubs, on whose shelter to place the nest.

It is very fond of woods crossed by small rivulets of water and also dotted by small rocks emerging from the ground even if a huge part of its life is spent hidden among the leaves of the high trees. During the spring migration it is found often also in the plain while hopping among the low branches of the blooming willows, busy in the usual and ceaseless look for small insects. 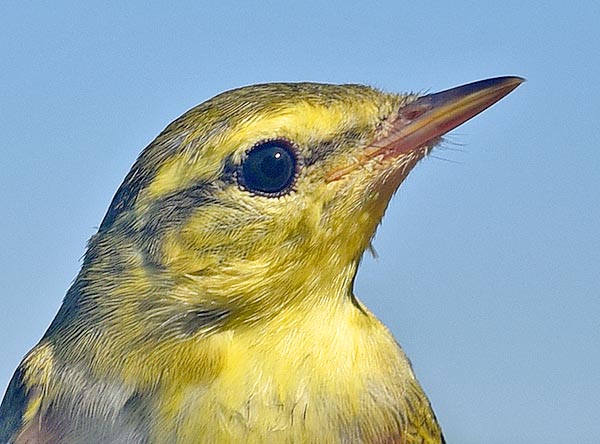 In fact the Phylloscopus sibilatrix is a great insectivorous, even if by late season, before the major migratory effort, integrates at times its normal diet with small berries trying to get more weight © Gianfranco Colombo

In the wintering sites in Africa it contents of sparse acacia scrubs, at times withered and without leaves even if the greatest concentration stands always in proximity of humid and evergreen thickets.

The wood warbler like all members of the family of the sylviids, is almost exclusively insectivorous nourishing mainly of dipterans, small lepidopterans and their larvae, of aphids and of caterpillars it finds sifting carefully each single leaf it meets.

During its research among the branches, it is often seen in positions somewhat strange and unstable while observing carefully the lower page of the leaves, rightly confirming the scientific name it has gotten.

In autumn it does not disdain to integrate the diet with some small berries, behaviour dictated probably by the frantic need of increasing its weight in order to face the very long migration.

As already told, the wood warbler is probably one of the easiest species to identify among its similars. The larger size that may reach the 12,5 cm of length, the weight of 8/12 g and the wingspan of about 22 cm, place it well far from the usual 11-11/11,5 cm of the Chiffchaff (Phylloscopus collybita), of the Willow warbler (Phylloscopus trochilus) and of the Western Bonelli’s warbler (Phylloscopus bonelli) even if one cm of difference is by sure not discoverable when observing a bird among the branches of a thick wood. However, even if very similar, the shape of the green gives the impression to be more slender and thinner than the other warblers and often keeps the body more “stretched”, making it look even longer than what it is in reality.

The colour of the livery evidences the upper part of a greysh/greenish colour at times dark and with yellowish dusting that contrasts with the white belly.

It's not easy from far to distinguish it from similar species, belonging to the same genus, but often, song apart, is recognized as the wood warbler is a little longer than the others. It is true that we speak of differences in the order of 1 cm, but to this we add the particular posture of body, often "stretched" in the Phylloscopus sibilatrix © Gianfranco Colombo

The head is crossed by a well marked supercilium also yellowish white but often even of bright lemon yellow colour and underlined by an olivaster line that from the bill goes parallel up to join and merging on the nape with the colour of the back. In particular the face, the throat, the chest and the line of the sides close to the wings, evidence a suffused but evident lemon yellow more or less strong depending on the age of the subject or the season of observation. The eye is brown/blackish, the feet flesh-coloured and the bill, thin and slender, greenish with black shades. The tail, despite appearing short in the proportions, is thin and well defined and marked by a significant bifurcation.

There is no distinction between the sexes and also the young have a livery fairly similar to the adults. 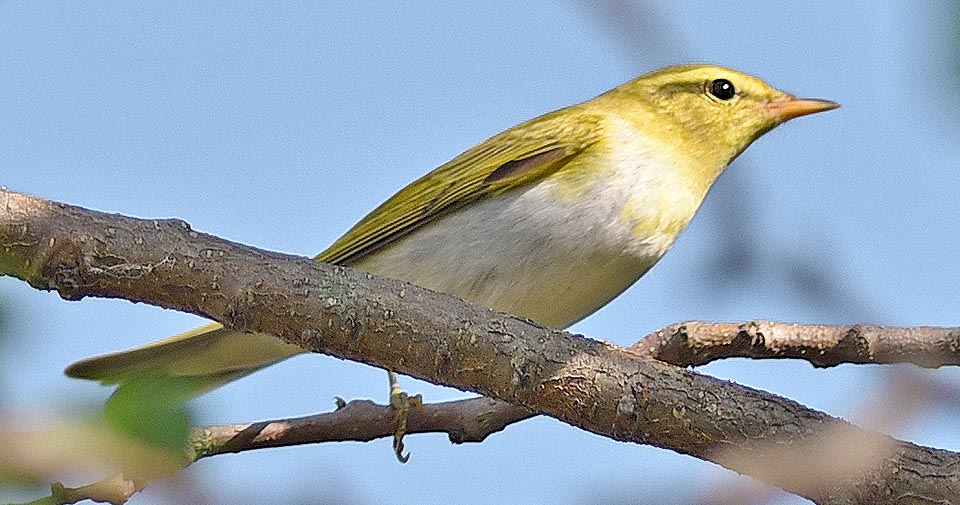 We need however a well trained eye, because it's a bird 12,5 cm long, weighing just 8-12 g and a wingspan of about 22 cm © Gianfranco Colombo

The song of the Phylloscopus sibilatrix is different from any other warbler and is formed by a typical shrill and spelled trill, a gradually accelerated ticking that end in a final slowdown, often alternated with a short series of 5 or 6 mournful “piu piuu piuuu”. When alarmed or close to the nest, it emits singularly and continuously the same mourning with a shriller and sharper tone. We have already explained how much is difficult to determine the various species of warblers when observed in the wild, operation that, conversely, is much easier when we have the chance of having a specimen in our hands. Their wing formula is something like a fingerprint for these birds and a concrete way for having the confirmation of a correct classification. Taken as reference the measure of the second primary remige we shall note that its length is the same or less to the fourth therefore the wing formula of the wood warbler will be P2 = 4 or 4/5. 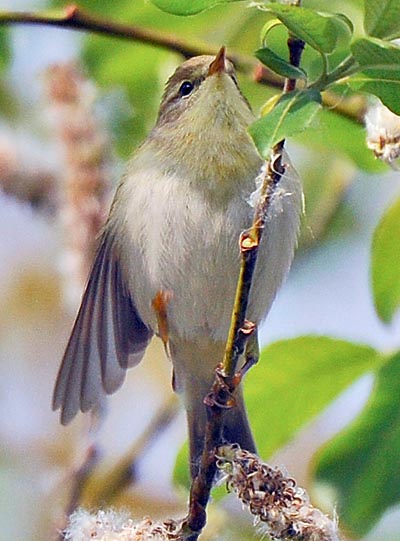 Who would tell it's a wood warbler? Faded, no evident yellow, and just marked supercilium. But the specific wing formula P2=4 or 4/5 does not lie: in simple terms the length of the second primary remex (the outer in the photo as the first, called alula, is almost invisible) is equal to the fourth © Gianfranco Colombo

The wood warbler nidifies on the ground in a shelter at direct contact with the soil, on the lee of tufts of grass, small shrubs or broken branches, creating a niche that it covers with very thin dry grass, leaves, hairs and feathers.

Usually it places it on a slightly elevated ground, thus to avoid possible water stagnations being the frequented woods rather subject to showers of summer rain.

It nidifies from mid May up to the end of July and in the most favourable areas can spawn even twice a year. It lays a good number of eggs, up to 8, of whitish colour strongly dotted of brownish grey that are brooded for about 13/15 days. The chicks are born featherless and stay in the nest for about 12/14 days and then disperse on the nearby ground hiding among the dried leaves. After a few days they begin to ascend the lowest branches to finally disappear gradually among the higher leaves.

Like all birds nidifying on the ground, also this warbler is subject to a strong predation that reduces the number of the survivors in the first year to very low percentages. Often the parents adopt the diversion of the fake broken wing for driving away the predators from the nest. In the wild, they have an average life a little over the 5 years.

It is a very common species in particular in continental Europe, where it counts very numerous populations and does not show, for the moment, particular reproductive difficulties. Consequently, it is not considered as an endangered species.