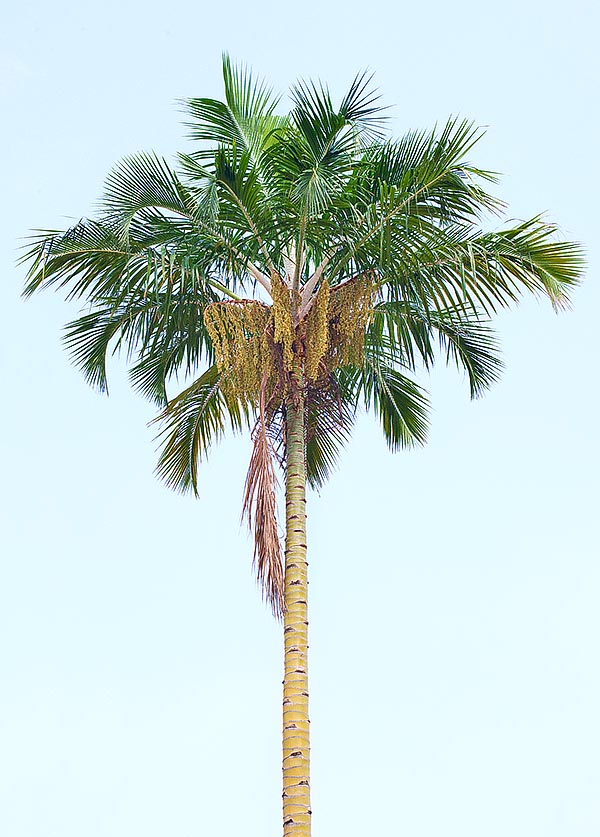 The Pigafetta filaris exceeds the 30 m with 6 m leaves. For Tropics only © G. Mazza

The plant is native to Indonesia (Maluku archipelago and Irian Jaya), where it grows up to 300 m of altitude on lavas, banks of water streams and margins of the forests, in open areas and in full sun; it acts as pioneer plant colonizing degraded areas.

The genus is honoured to the Italian navigator Antonio Pigafetta (1491 [?] - 1531 [?]; the name of the species is the Latin word “filaris” = filiform, filamentous, maybe referred to the thin fibres obtained from the leaves and utilized for making clothes, carpets, etc.

The Pigafetta filaris (Giseke) Becc. (1877) is a dioecious plant with single stem, more than 30 m tall, with individuals, in the wild, even 50 m tall, and a diameter of 30-45 cm, glossy green for a good part of its length, tending to the brown in the oldest part, and on which are evident the grey rings trace of the junction of the old leaves; it has often a mass of adventitious roots at the base.

The leaves are pinnate, up to 6 m long, strongly and elegantly arcuate, with tight dark green pinnulae, thin and acuminate, about 1 m long, equipped with short bristles at the margins and along the central nervature; the pinnulae are regularly inserted along the rachis with an angle bound upward forming a V.

The petioles are robust, about 1,8 m long, with the foliar base which does not fully surround the stem, but is open on the side opposite to the petiole, of green grey colour and covered by a white powder; foliar base, petiole and rachis have some slightly undulated and close crests with flexible, about 7 cm long and yellow thorns. The inflorescences come out from between the leaves, are similar in the female as well as in the male plants, of pale yellow colour, about 2 m long, with peduncle and rachis disposed almost horizontally and pendulous floriferous branches. The fruits are ovoid, about 1,2 cm long, covered by imbricate yellow to orange scales and contain one seed only.

It reproduces by seed which germinates in 1-2 months at the temperature of 24-28 °C; the sowing must be done at the maximum luminosity, also in full sun, in the shade, the young plants do not develop and finally will die. The growth, after the initial phase, is particularly fast, almost one metre of growth per year in the optimal cultivation conditions. Majestic plant of great ornamental and landscape value is cultivable in full sun in the humid tropical and marginally subtropical climate zones, even if it may bear rare, short lasting, decreases of temperatures close to the zero, but it doesn’t stand long periods of temperatures even relatively mild; its growth stops already by around the 13-15 °C. It is not demanding about the soil, it may grow up also on the poor ones, provided there is abundant availability of water all over the year, but, of course, takes advantage in presence of soils rich of organic substance and with regular fertilizations.