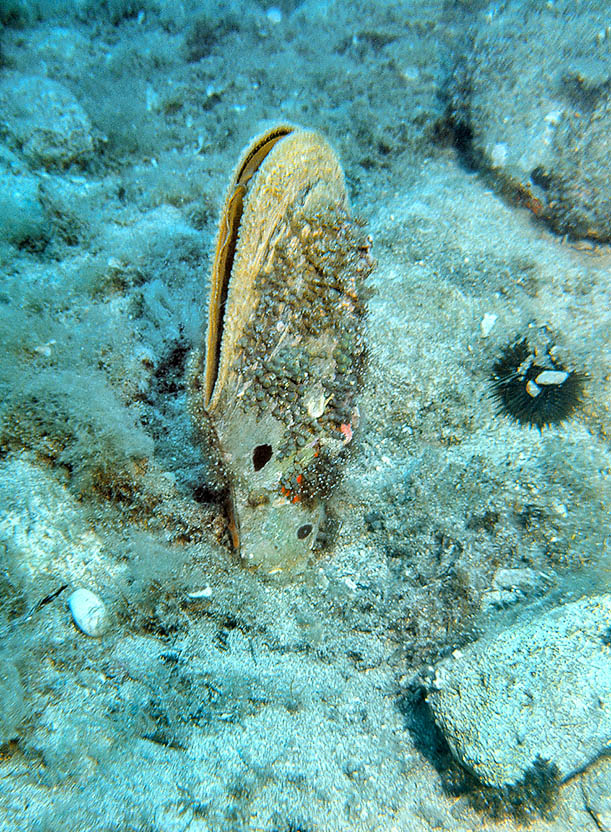 The Fan mussel (Pinna nobilis) is a bivalve endemic to Mediterranean with a shell that can reach the 120 cm, sunk vertically on the sandy, muddy and detrital bottoms between the 3 m and about the 40 m of depth © Giuseppe Mazza

The Fan mussel (Pinna nobilis Linnaeus,1758) belongs to the class of the Bivalvia, molluscs with two lateral valves united by a hinge, to the order of the Pterioida and to the family of the Pinnidae, characterized by two fragile shells of triangular shape.

The name of the genus Pinna is identical to Latin that, besides the various meanings of pen, fin of fishes, pinnacle, omen and many other realistic or figured ones, rightly denoted this mollusc, very known in antiquity. The name of the species, nobilis always in Latin underlined valuable aspects, such as our “noble”, aristocratic, renowned, excellent and also, in a bad way, ill-famed”. All highlights the excellence of this mollusc, with whose byssus (the fibre attaching the base to the substratum) they wove the most precious cloths destined for deities or rulers.

On the contrary, the Italian name “nacchera” (kettledrum) points out the vague resemblance of the bivalve to the percussion instruments used in many folk dances.

Endemic to the Mediterranean Sea, it has disappeared from many zones with high anthropic impact, pollution, trawling and rarefaction of the seagrass meadows. Instead, it appears that it has timidly reappeared in some points of the Venetian lagoon where it was thought to be extinct, probably favoured by the artificial reefs positioned for the MOSE project.

The fan mussel loves the sandy seabed, muddy and detrital that are often colonized by the Posidonia oceanica, aquatic plant with nastriform leaves. It can found, however, also on hard bottoms where are present cracks or points of the substratum suitable for its anchoring.

Being a filter-feeder it thrives more easily, creating at times thick colonies, in all those positions with constant and moderate water flow where it can easily intercept the nutrients and the plankton of which it nourishes. The depths where is most common may vary from 30 metres under the surface up to little more than 40.

The shell, devoid of hinge, is triangular in shape with the upper side shorter and weakly rounded. When young the outer surface has many protrusions elongated outwards. They have the shape of nails, with almost closed U-section and sharp edges, that with the passing of the years will gradually become blunt until they disappear. The biggest specimens, that can reach and perhaps exceed the 120 cm, have usually the outer surface almost smooth. Often, over time, the crust covers with epibiontic organisms that render more difficult its identification.

The inner face of the valves is reddish, with the umbonal part pearly. At times it can display protrusions or small opaque pearls of no commercial value at all.

Both above characteristics come from the inclusion of small foreign bodies or sand grains that the animal, to protect itself, covers with a carbonatic concretion. From the part infixed in the substratum flows, through a channel, the secretion produced by the gland of the byssus. The substance filters outside insinuating into the bottom and, hardening in contact with the water, forms that net of very thin threads known under the name of byssus. 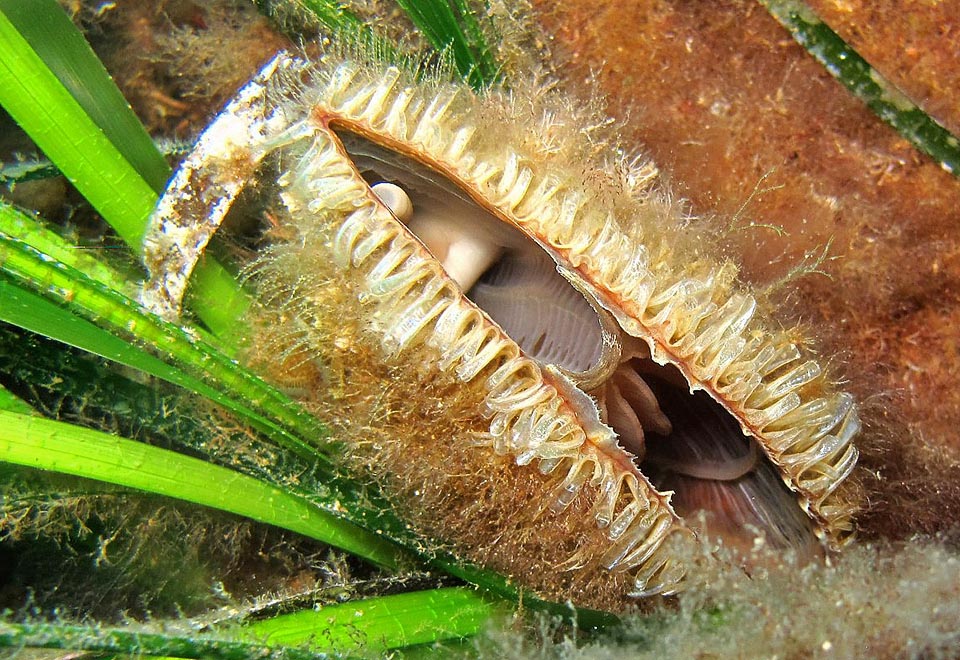 Close-up from above of a young specimen in a prairie of posidonia. We can note the siphons, for the entry and exit of the water filtered by the gills and on the edges the protrusions like nails, with U-section typical of the first years of life. Like all lamellibranches it nourishes of organic material in suspension, live or dead, passing close to it © Sebastiano Guido

Inside the protective shell, the whitish body of the lamellibranch displays to the keen eye of the observer that does not scare the mollusc making it close, part of the mantle (that secretes the shell) whose borders forms siphons for the entry and exit of the water. Much more showy are the gills, in charge of the gas exchange and the filtration and retention of the food particles suspended in the stream. Evident is also one of the adductor muscles that, contracting in case of warning, causes the immediate closing of the valves.

Almost usual guests of this inner part, visible, are a semitransparent shrimp, the Pontonia pinnophylax usually in pair and, much more rarely, a tiny crab, the Pinnotheres pisum. These crustaceans are very shy and at the least warning of danger they let themselves fall more deeply inside the fan mussel, alerting it and causing its immediate closure.

The Pinna nobilis has a life that may reach or just exceed the 23 years. No evident sexual dimorphism can be noted.

During the reproductive period are released male and female gametes. If they will meet, they will generate a larva that, if not preyed, after 10 days will fall on the bottom where will partly bury and, after some months, will start to secrete the byssus. This fibre, besides the anchoring, seems also to have defensive properties against some parasites.

Of low nutritional interest due to the tasteless flavour of the flesh (that may reach even one kilo of weight) the mollusc, in the old times more than as food was utilized for the production of an admirable textile fibre, the byssus, mentioned many times in the Bible, as fabric for realizing the finest garments. 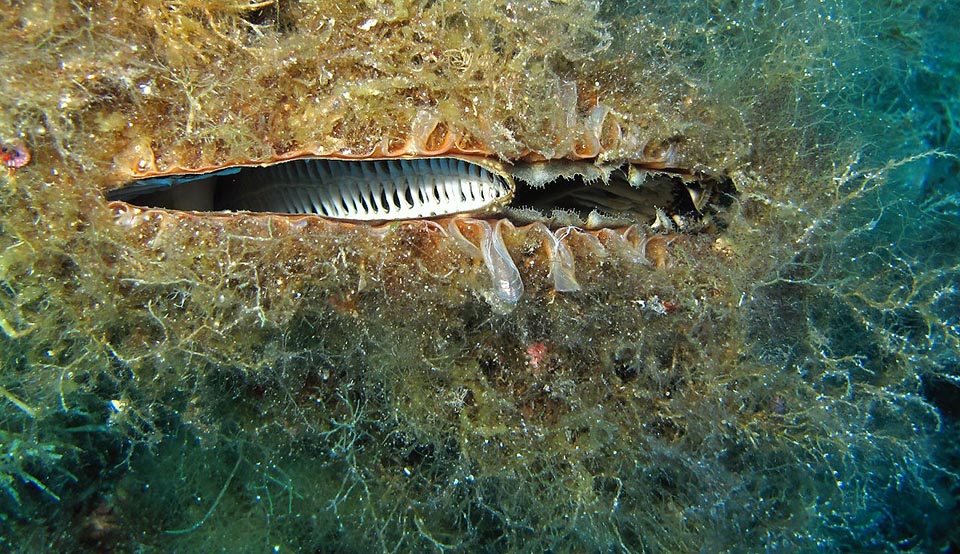 Covered as it is by incrustations and epibiontic organisms it is not always easy to see a modest-sized fan mussel. In this specimen covered by algae we note only the opening with the gills. The Pinna nobilis hosts often a semitransparent small shrimp, the Pontonia pinnophylax and a small tiny crab, the Pinnotheres pisum. These very shy crustaceans, serve as alarm bell. At the least sign of danger they let them fall inside, alerting the bivalve who immediately closes contracting the adductor muscles © Sebastiano Guido

For instance, in the second book of the Chronicles they talk of the “Levitican singers / …… / dressed in byssus”. Also in the Egyptian, Greek and Roman antiquity the prized fabric was a prerogative of the deities and of the rulers. The corpse of Anchise was wrapped up in it and also in the battle of Anzio Cleopatra appears having been wearing veils of byssus.

Probably at some ancient peoples the mollusc was fished, deprived externally of the precious textile fibre and put back into the water from where was extracted two or three times per year for this operation. Pliny the Elder, on the contrary, in his Historia Naturalis cites a tool called pernilegum with which were taken off from the sea the fan mussels, but states that the fibre was taken completely amputating the lower part of the shell and killing in this way the mollusc.

From the advent of the silk, that has replaced the byssus in the making of valuable fabrics, the production of this precious tissue has increasingly reduced and nowadays are very few those initiated to this ancient practice that continue the historical processing.

Unluckily, besides the millennial traditions, are decreasing also the big shells that, in addition to environmental degradation, now suffer also from a new threat. It seems, in fact, the a parasite hitherto unknown, the Haplosporidium pinnae, has has started hitting the fan mussels of the Spanish coast and threatens to spread also in the rest of the Mediterranean.

From May 21st 1992, with directive 43 of the European Economic Community (EEC), the species has been declared protected and its collection in any form is prohibited if not for scientific purposes.