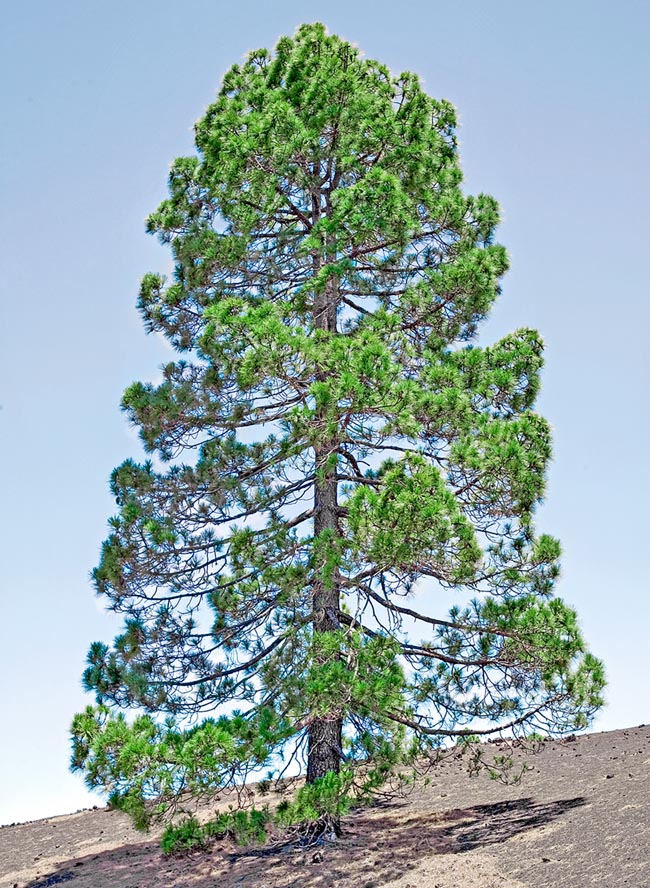 Relatively young isolated specimen of Canary Island pine (Pinus canariensis) posture. It has grown on bare soil not yet colonized by other plants. It is well visible the insertion in verticils of the primary branches © Giuseppe Mazza

The Canary Island pine (Pinus canariensis C.Sm. 1825) is a 30-40 m tall tree with cylindrical and straight trunk, with an up to 3-3,5 m circumference, and is protected by a rhytidome (outer bark) that transforms, very often fissuring, in longitudinal grey plates with reddish or reddish brown shades that do not flake off.

The top is strictly conical in the young plants then it widens at the bottom, becoming more or less irregular and dense thanks to the capacity of this pine to emit along the trunk branches (epicormic branches) that can reach even remarkable dimensions and to form numerous suckers at the base of the stump when the plant is cut or has survived a fire.

In old age, especially if isolated, the crown is usually columnar or umbelliform.

The small branch of the year is monocyclic, robust, glabrous and with numerous rounded scales (euphylls) of yellow brownish more or less clear colour, the gemmae are up to 2 cm long, more or less ovoidal and pointed, not resinous; the perulae, with the inner pagina covered by numerous whitish bristles, are reflected at the apex.

The definitive needles, united in fascicles of 3 with a persistent basal sheath upto 2 cm long, are diplostelic (they have two cribrovascular fascicles), 15-25 (30) cm long thin, pendulous, of bright green colour often tending to yellow; their abscission begins in the summer of the second year and ends during the third one. Initially, the epicormic small branches have young needles 3-6 cm long, single, minutely serrate, intensely glaucous; these needles can also be interposed between the definitive needles. The radical apparatus is vastly ramified and goes deep.

The wood is discoloured with white to yellowish sapwood (the outermost wood), whilst the heartwood, very resinous and perfumed, has a golden chestnut colour. Exceptionally durable and highly appreciated, the wood is utilized in joinery, in carpentry and for building and naval constructions. 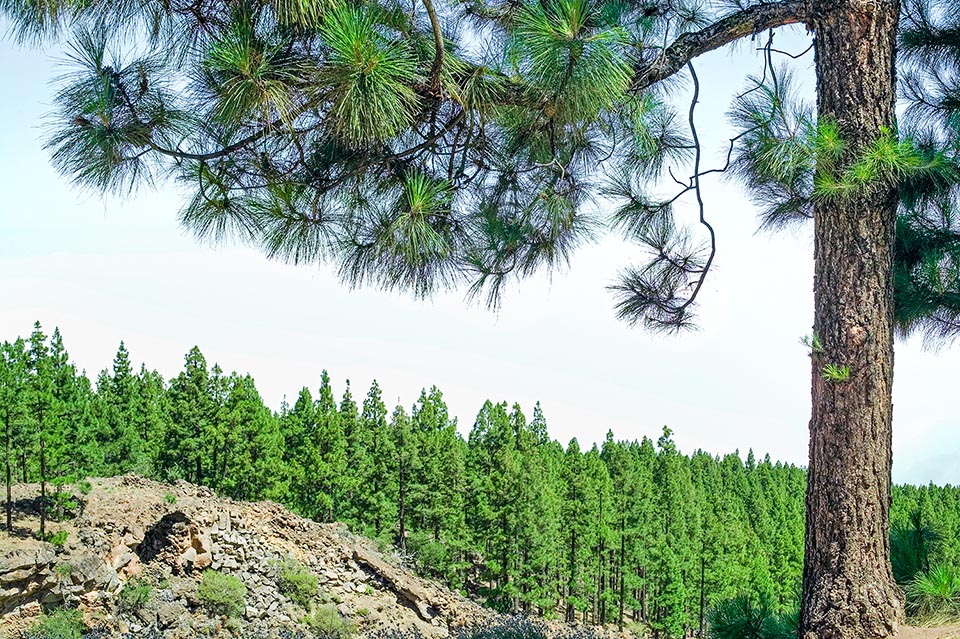 Like all pines, P. canariensis is a monoecious species with the sporophylls of both sexes spirally inserted to form a cone. The male cones, numerously aggregated at the base of the branch of the year, have a conical-elongated shape of orange-yellow colour, the female ones are united in small groups of 2-3 in the subapical portion of the branch of the year; they are purplish with conical-elongated not pointed shape.

Once pollinated (March to May, depending on the altitude), the female cones group and, by the end of the second year, they reach maturity passing from green to brown reddish. 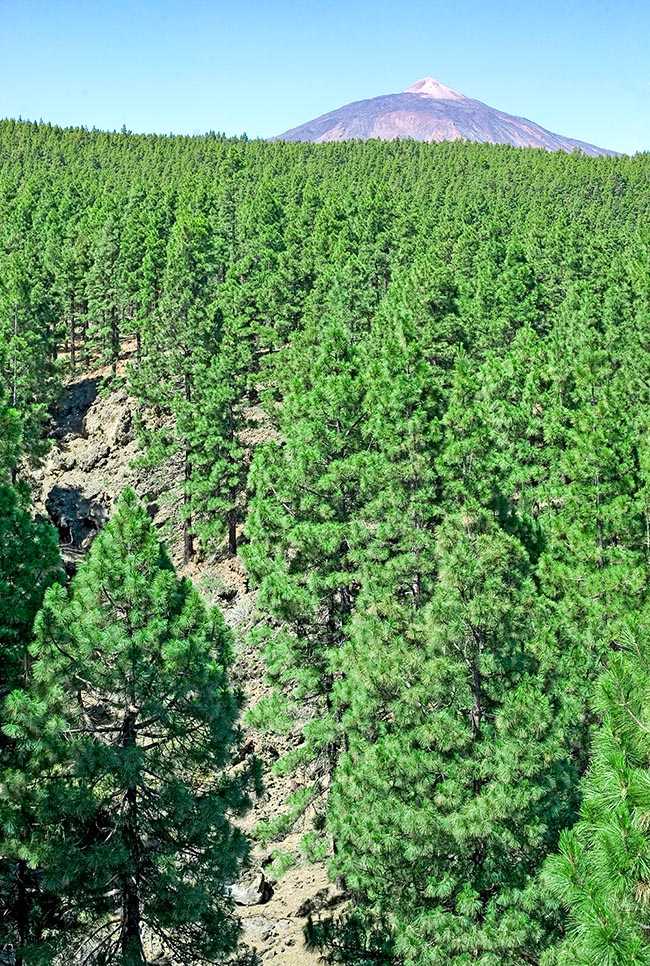 Coetaneous pinewood of Pinus canariensis. On the background Mount Teide, extinct volcano in Tenerife Island, in the ‘Parque Nacional del Teide’, that being 3.718 m tall, is the highest peak of the archipelago © Giuseppe Mazza

They are conoidal, 10-20 cm long with a diametre of 5-10 cm; they are subsessile or have a truly short peduncle, the lignified apophysis of the scales are shiny with little relieved keel and mucrone not too in relief.

The seeds are 10-15 mm long (100 seeds weigh about 10 g), discolour with a grey to anthracite grey colour and the other more opaque and clearer, even with walnut colour; the wing, that does not easily detach, reaches the 25 mm of length with 1 or 2 drk bands.

The strobiles are late in ripening as they can remain on the tree for various years, whilst the seeds, once fallen on the ground, quickly germinate when rehydrated; however, a short period of stratification with low temperatures (4-5 °C) may uniform and accelerate the germination phase.

This modality of asexual reproduction, widely diffused in the woody dycotiledons (it’s on it that is based the ‘coppice government of a wood), is conversely very rare among the gymnosperms and is totally absent in the genus Pinus.

As ‘exactly’ evidenced by the specific name, P. canariensis is endemic to the western islands of the Archipelago of Canaries (Gran Canaria, Tenerife, La Palma, Hierro and Gomera) where it grows between 600 and 2.100 (2.200) m of altitude; it is mainly in Tenerife and La Palma that its pinewoods have an appreciable extension, whilst in the other three islands it had almost disappeared; only starting from the middle of the last century new plantations have been undertaken eliminating in the meantime the exotic pines.

Only two Californian pines, P. radiata D.Don and P. torreyana Parry, have an even more limited distribution areas, on the opposite stands P. sylvestris L., that crosses northern Asia and is diffused from the European Atlantic coasts up to the Asian ones of the Pacific Ocean.

The climate of the Canary Islands is tropical, semi-arid to desert, but it is more or less mitigated by the high atmospheric humidity generated by the ocean that, impacting the volcanic reliefs, condenses in a belt of clouds and fogs; in the coastal zones the annual rainfall is less than 250(350) mm but above, and up to about 600 m, especially along the sides of the western islands exposed to the trade winds, it reaches the 600-650 mm, higher, the rainfall reduces to about 400 mm. 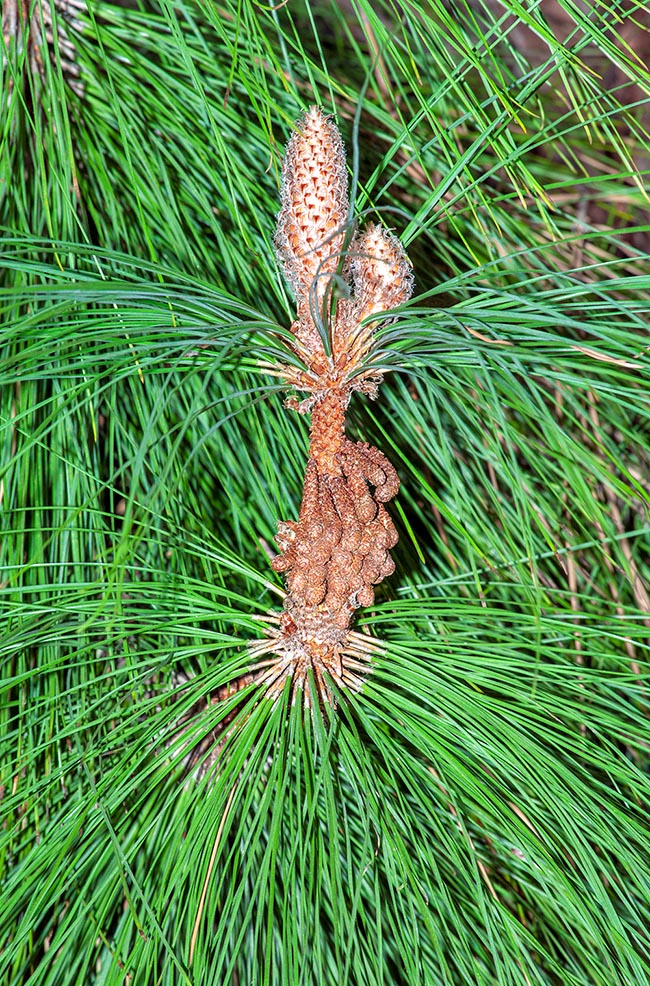 Canary Island Pine fertile small branch. The needles are united three at a time in sheathed fascicles, exceptionally long and pendulous, green with glaucous stomatous bands. The male small cones are now dry and begin to fall; at the small branch apex the two small female cones have been pollinated and begin to develop © Giuseppe Mazza

The plants intercept the water vapour and on their surfaces condense it into drops that fall to the ground where they are absorbed by the volcanic soil. Thanks to this further watering they get the necessary water and, in the meantime, introduce in the environment where they do live, water for their “housemates” organisms; this cooperation between climate and living beings is mainly mediated by the pinewoods.

Though preferring those volcanic, acidic, and well drained, the species is quite indifferent to the type of soil.

Like all pines, it is heliophilous, sensitive to the low temperatures and tolerates only short periods under -6/-10 °C. It is xerophilous and as such, besides intercepting the atmospheric humidity, has several macroscopic (i.e. the thick and scaly bark) as well as microscopic (at the level of the needles and of the woody vessels) adaptations.

The major dangers for this species are represented by the anthropic communities, due to request of new spaces and the need of timber for building, as well as by the fires from which the pine defends by means of the thick bark (poorly flammable) and the serotine strobiles and the capacity to regenerate through the stump suckers.

P. canariensis (‘Pino Canario’, ‘Pino de Canarias’ in Spanish), being a diplostelic pine, belongs to the subgenus Pinus and more precisely to the sub-section Pinaster Mayr ex Koehne formed by the more or less thermophilic Mediterranean pines (P. brutia Ten., P. halepensis Mill., P. heldreichii Christ, P. pinaster Aiton and P. pinea L.), by the Canary Island Pine and by a species of the Himalayan spurs (P. roxburghii Sarg.) ; about the latter two, in spite of the 9.000-10.000 km presently separating them, they have proved to be phylogenetically very close.

Already from some time it was believed that the two species had evolved from common progenitors as in Europe and also in Asia had been found several fossils that evidenced how their ancestors had been amply distributed in the two continents, but recent studies have also proved a strict genetic contiguity between them. P. canariensis has been present in southern Europe till the Pleistocenic glaciations (the Pleistocene has begun about two and a half million of years ago) succeeding then, as well as other species , to survive only in the Macaronesian islands.

Nowadays, in these islands most of the pinewoods are completed by plant associations called « with laurophylls», that is, forests prevalently formed by shrubby evergreen broadleaves, arboreal, and even sarmentose, with big leaves, long and glossy (like those of the Laurel (Laurus nobilis L.), that require high atmospheric humidity and mild temperatures. 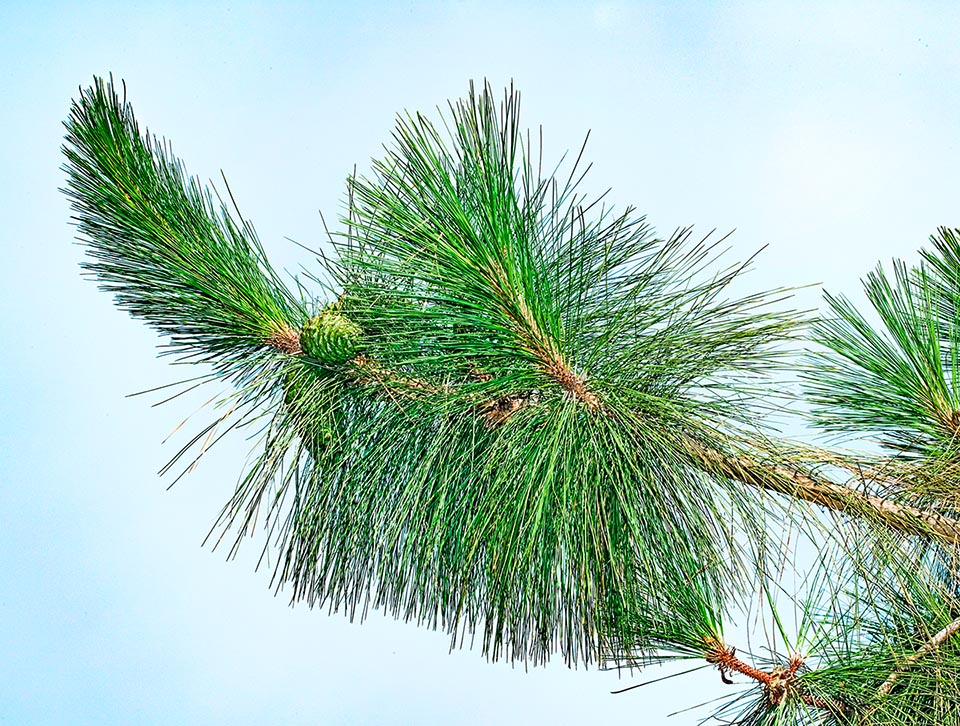 Fertile small branches. They are cylindrical with a diametre of 7-15 mm. That in front is three years old, and by the end of the penultimate year there are three strobiles on a verticil. Growth is completed but they are still green, unripe. On the background branch we well note the traits with no needles that had carried the male small cones © Giuseppe Mazza

Besides the Canary Archipelago and the other archipelagoes forming the Macaronesian region (the Islands of the Fortunate, μακάρων νῆσοι, of the Greek culture: Canaries, Açores, Madeira, Cape Verde, etc.), the forests of the laurophylls are found in various regions of the planet with similar climates but we know by sure they were vastly diffused also in the Mediterranean Basin from which, excepting some borders of the Iberian Peninsula, they have disappeared due to the aforementioned Pleistocenic glaciations.

However, some single species have survived, as they had found suitable shelters and time later on have adapted to other types of cenosphere; they are called ‘Mediterranean-Macaronesian species’ as, for instance, are holly, buckthorn, laurel, various tockroses, arbutus, ivy, heather tree, cherry laurel, field elm, yew, and so on. 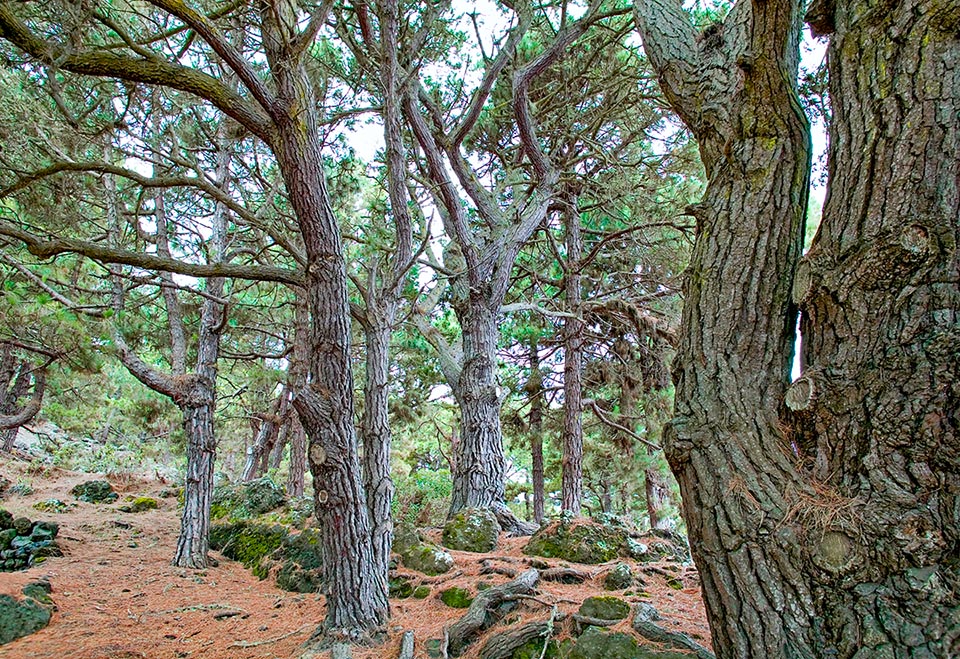 Pinewood interior of Pinus canariensis. The plants have undergone pruning to eliminate the now dry branches that may increase fire risks, also because the abundant litter of needles can be a very dangerous trigger for the fire. In the foreground the erosion has evidenced the long and powerful roots of these pines © Giuseppe Mazza

It is cultivated for the production of work timber, locally as well as in other continents, especially in Australia, in South Africa and also in California, more limitedly also in some zones of the Mediterranean littorals, it is cultivated together with other pines mainly for reforesting valleys and cooler humid depressions.

In the Canary Islands they employ the pine needles litter for the confection of the bananas to export whilst the cones are commercialized for Christmas decorations. Apart from those utilizations, in the zones with mild climate, the Canary Island pine is sought for as ornamental tree. In Europe, it is mainly utilized in Italy (Riviera and southern coasts) where it was introduced in 1822. 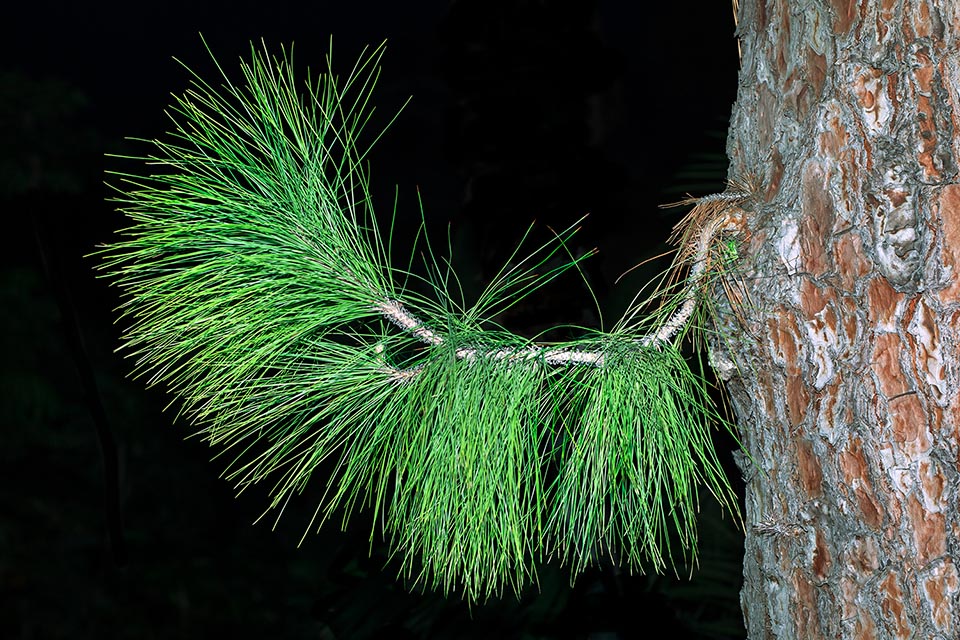 Epicormic 4-5 years small branch. We note well the coloured dots on the scales of the bark © Giuseppe Mazza

Negative aspects of the cultivation  out of its distribution area, is the ease with which it can become invasive in shrubby or grassy areas not otherwise cultivated; this has mainly interested the ‘mallee’ of West Australia and the South African ‘fynbos’  (‘mallee’ and ‘fynbos’ are shrubby formations quite similar to the Mediterranean thicket typical to the other two above mentioned countries.

In any case, the major advantages of this species are its resistance to fire that allows to quickly reconstitute a forestal cover with anti-erosive function, and the vital importance of the interception, control and distribution of the atmosphere humidity. Without any exaggeration, we can say that the Canary Islands without pinewoods would semi-desert if not totally desert sites.

No synonyms are known for this species.