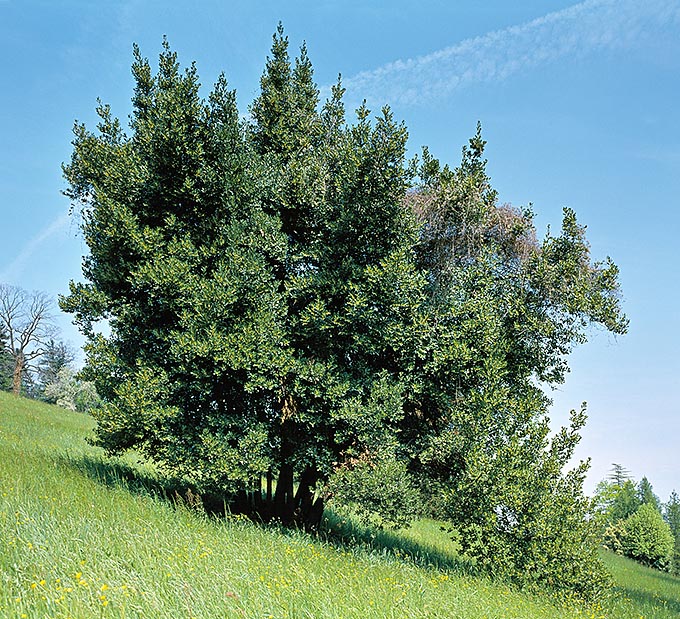 Species probably native to Asia Minor or, perhaps, wreck of the warm-humid climate of the Tertiary Era, nowadays with Steno-Mediterranean distribution, that is limited to the Mediterranean coasts, from Gibraltar to the Black Sea, widely introduced and cultivated in many regions and naturalized, in particular in the Olive tree zone and of the large Insubria lakes. In Europe (Açores Islands and Canary Islands) grows also the Azores laurel Laurus azorica Franco (1960), only other species of the genus Laurus.

The name of the genus “laurus” is traced back to the Latin epithet “laus”, praise, because the wreaths intertwined with its branches were placed, in those times, on the head of those deceiving praises. After others, due to the many praises bestowed to this species, sacred to Apollo. For other Authors, it should come from the Celt “blaur”, meaning green. The name of the species “nobilis” = noble is due to what said before and its many virtues.

The stem often divides or ramifies below giving the plant a bushy look. The bark of the stem is initially greenish, then dark ashen grey or brownish. It has very ramified and gnarled roots, that go much deep in the ground and partially horizontal and in this case, stoloniferous. Dense canopy, usually more or less strictly pyramidal; elongated gemmae shaded of red, alternate leaves, simple, coriaceous, evergreen, with briefly petiolate lamina, elliptic to oblong lanceolate (2-4,5 x 5-10 (14) cm) shaped, cuneate at the base with entire margins and a little wavy, acute or acuminate at the apex, glossy, glabrous, dark green on the upper page, paler below.

The flowering takes place from March to May; it is a dioecious plant, that is, carrying male and female flowers on separate plants. The unisexualism is due to evolutive phenomena of abortion starting from the initially complete flowers. The flowers are merged in 4-6, in small axillar umbels, with basal bracts; the are small, yellowish or yellow-greenish, the male ones with 8-12 yellow-golden stamina in verticils, the female ones with 4 staminodia (sterile stamina), free from the receptacle ovary, one style with trigone stigma. 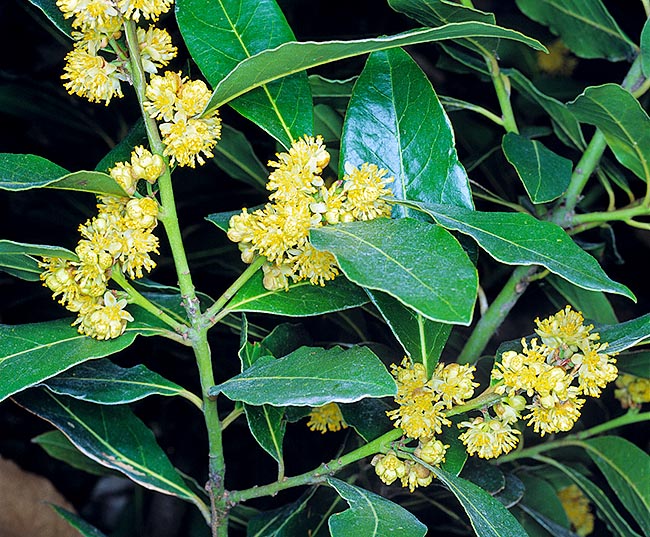 The fruits are 10-12 (<15 mm) ovoid berries, initially green then black when ripe, with glossy and a little crusty shell, containing only one spheroid, smooth, marbled seed. The laurel is a Mediterranean species loving the cooler and more humid transition stations between the horizon of the evergreen sclerophylls and that of the broad leaved heliophilous forming, in the origin habitats, pure woodland groups or mixed with the deciduous oaks, from the sea level up to 600-800 metres of altitude.

The wood of the laurel, white-pink, is slightly odorous, semi-hard, with fine and compact texture, glossy. It is used for turneries or for carving or also, time ago, where the plant abounded, also for getting poles for the vineyards.

It is one of the best species for forming scenes and hedges; it very well bears the pruning and was very much used in topiary in the Italian style gardens together with the box, the yew and the hornbeam.

The laurel is symbol of knowledge, life and of glory and its leafy branches still now are intertwined to form ceremonial wreaths, as was used in the past for crowning emperors, conquerors and poets. Still now the universities deliver the “graduation”. It multiplies employing the rooting suckers (rarely by layering and by semi-woody cuttings or tips) or by seed previously left soaking in water, or scarifying it with abrasives for eliminating part of the woody coating. The seeding should be done in small pots with light loam (1/3 sand, 1/3 land, 1/3 peat). They have selected some ornamental cultivars such as the ‘Angustifolia’, resistant, with strictly lanceolate laminae and the ‘Aurea’, more delicate and sensitive to the cold and to the strong insolation, with golden and pointed leaves.

The leaves are preferably collected in July and are to be dried in cool and aerated locations; they contain a yellow-greenish essential oil, much aromatic, besides tannins, resins, mucilage, bitter substances, etc.. They have digestive, appetizing, antiseptic, expectorant, carminative, anti-rheumatic, diaphoretic and tonic properties. For external use, they serve for stimulating baths and deodorizing footbaths, they can also be utilized for keeping moths away from clothing and is repellent also for flies and cockroaches. 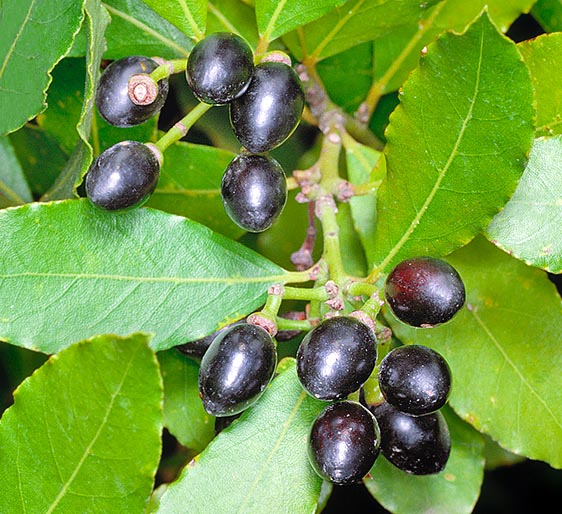 They are much used in cuisine for aromatizing dishes of meat, offal and game (favouring also their digestion) or of fish, in the vegetables in oil and pickles and in the packages of dried figs and of liquorice.

The ripe fruits are collected in autumn from the female plants and are dried in the sun or in warm oven; these contain also laurin, laurostearine, sugars and gums.

They extract the laurel oil, popularly employed, not only in veterinary medicine, but also as anti-rheumatic and anti-gout, and which, time ago, was gotten cooking the berries in the lard.

With the fruits they prepare the excellent Laurino, typical Emilian liquor.

In the popular tradition the laurel enters into various preparations against meteorism, intestinal fermentations, diarrhoeas, nervous and mental depression, rheumatisms and rheumatic pains, hepatic-biliary insufficiency and liver intoxications and, for external use, in the skin parasitic infections.

Leave to infuse for five minutes a teaspoon of chopped fresh laurel leaves in a cup of boiling water just taken off from the heat. To strain with a sieve, leave cooling a little and add a teaspoon of honey. To be taken in the evening one hour before going to bed.

For obtaining this digestive and strengthening liquor prepare syrup with 1 kg of sugar and one litre of water. When still boiling pour it on 1 kg of ripe laurel fruits, leave to cool and finally unite one litre of alcohol for liquors. Leave to rest for one month in the cool and dark in a glass vessel, then strain with thin paper or tissue paper and bottle. To drink after one year of ageing.