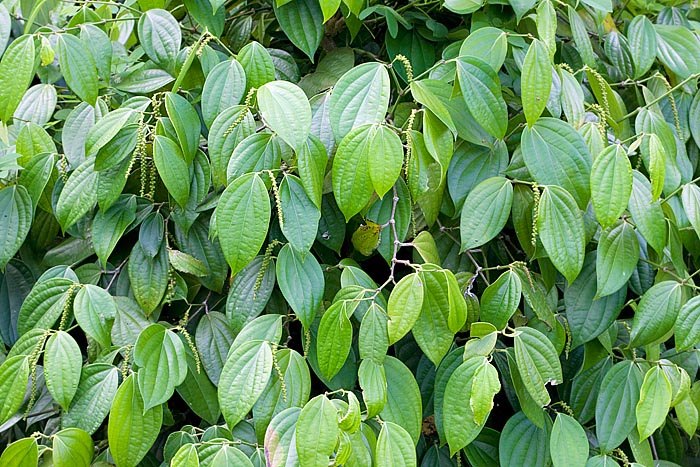 Piper nigrum is a woody climber with 6-10 m long stems. It makes the world most used spice © Giuseppe Mazza

The species is native to south-western India, where it grows in the humid forests from the sea level up to about 1200 m of altitude.

The Piper nigrum L. (1753) is a woody, evergreen, climbing species, with knotty stems long up to about 6 m, even if in some cases they can reach the 10 m, which adhere to the support by means of adventitious rootlets produced at the nodes. The leaves, on a 1-4 cm long petiole, are alternate, simple, ovate to ovate oblong with pointed apex, entire margin and prominent nervations, usually of glossy dark green colour on the upper page, paler below, 10-15 cm long and 5-9 cm broad, rather thick and coriaceous. 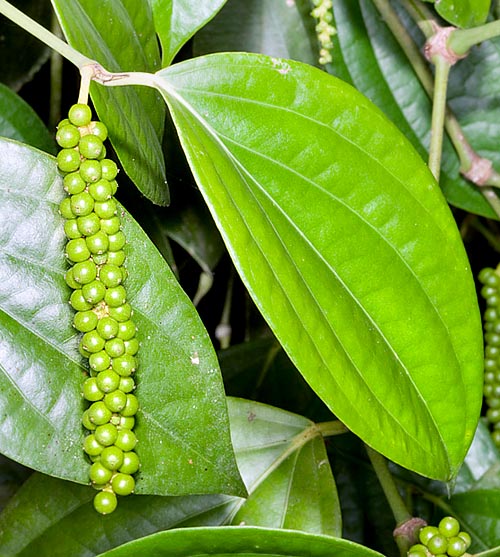 The inflorescences, produced at the nodes from the opposite side of the leaf on a 1-2 cm long peduncle, are hanging spikes of variable length, 4-15 cm, with numerous tiny whitish or yellow-greenish flowers, sessile, without sepals and petals, thickly placed along the rachis; the plants in the wild are usually dioecious (each individual carries only male flowers or only female ones), whilst the numerous cultivated varieties, result of a long selection, are polygamous (carrying on the same plant hermaphrodite as well as unisexual flowers) or monoecious, with hermaphroditic flowers.

The pollination in the cultivated plants is favoured by the rain or by the dew which carry the pollen from the upper spikes to the lower ones. The fruit is a globose drupe of 0,4-0,6 cm of diameter, of red colour when ripe, containing only one white seed.

It reproduces by seed, with the first fructification after 7-8 years, through the adventitious basal branches rooting at the nodes, by cutting and grafting, in particular on Piper divaricatum G.Mey (1818), resistant to the nematodes and to the collar rot, the most serious disease affecting the species, caused by Phytophthora sp., which causes serious damages to the cultivations.

Species of significant economic importance, cultivable in the humid tropical climate zones, between the 20° North and South parallels, characterized by high rainfall, well distributed during the year, day temperatures of 25-35 °C and relative humidity over the 70%.

It requires full sun, but the young plants which are to be protected against the excessive summer sun exposition or partial shade and may grow on a vast variety of soils, provided well draining, as it does not stand water stagnations, preferably acidic or neutral, rich of organic substance and kept constantly humid. 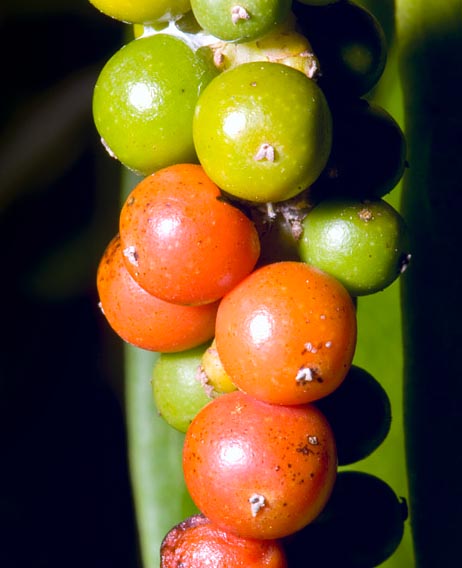 It can be cultivated in large pot in draining loam rich of organic substance, in luminous position with winter temperatures not under the 18 °C. The dried fruits, whole or ground, are the most utilized spice in the world; the largest producers are India, Indonesia, Malaysia, Brazil and Vietnam; the organoleptic characteristics come from the contents in essential oils and oleoresins, in particular the pungent taste is mainly due to an alkaloid, the piperine, present in greater amount in the pericarp.

The spice is commercialized in various forms, depending on the ripening stage and the processes it undergoes; by far the most utilized is the black pepper which is gotten from the completely developed but still green fruits which, after having had a short cooking in warm water are exsiccated in the sun for some days or in appropriate ovens, becoming of blackish brown colour; then comes the white pepper, with a less pungent taste, obtained from the fruits harvested with a greater degree of ripeness, with the colour turning yellow-orange, put in sacks and immersed in running water for some days, operations which softens and detaches the pericarp by friction, and then washed and dried in the sun; it may be also obtained hulling the black pepper by machine. Limited diffusion have the green pepper, obtained by the unripe fruits dehydrated or frozen or preserved in vinegar or brine, and the pink pepper, from the completely ripe red fruits, conserved in brine (not to be mistaken with the berries of the Schinus molle commercialized under the same name). The pepper and its derivatives, besides the well-known utilizations in the culinary practice, do also have applications in the cosmetics industry, in the perfumes one and in the traditional medicine, in particular in the Indian one, where it holds a position of particular importance.