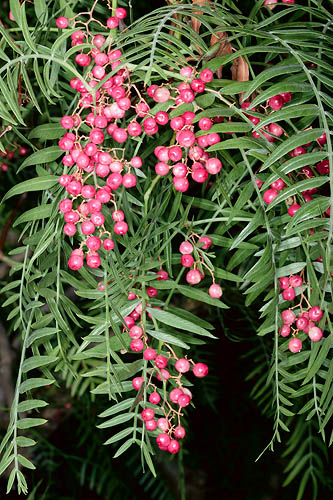 The Schinus molle L. (1753) is native to South America (Argentina, Bolivia, Brazil, Chile, Ecuador, Peru, Paraguay and Uruguay), where it grows mostly on arid slopes and rocky soils between the 1.000 and 3.400 metres of altitude, in areas characterized by long drought periods.

Arboreal evergreen plant, diocieous (each individual carries only either male flowers or female ones), which can be more than 10 m tall, with a nodose and wrinkled stem which can have a diameter of more than 50 cm; the young branches are hanging, like also the odd-pinnate leaves, long up to 30 cm with lance-shaped leaflets, tough, of a pale green colour, long up to about 6 cm and 3-7 mm broad, with smooth or jagged edges. The plant forms a wide rooting apparatus, either in breadth or in depth. The inflorescences are pendent panicles, 15-25 cm long, carrying small yellowish-white flowers; the fruits are 5-8 mm diameter globose drupes with a pink to red colour, aromatic, persisting on the plant for a long time, which contain only one 4-6 mm of diameter seed, of a blackish colour, with a smell and taste which remind the pepper. All parts of the plant contain volatile aromatic essences.

It easily reproduces by seed, which is to be sown as soon as picked, as it does not hold a long period of viability, by semi-woody cutting or by air layering. Much ornamental plant, widely spread in Mediterranean climate zones, it adapts to every type of soil, even if poor; when adult it resists to long drought periods and to temperatures of around -6°, -8 °C. When positioning it, the ample rooting apparatus is to be kept in mind, in order to avoid possible damages caused by the same.

All parts of the plant have been variously utilized in the traditional medicine and the antibacterial activity of the essential oils extracted from the leaves has been proved. The aromatic resin produced by the tree is utilized as mastic, whilst the resinous, hard, resistant and easily workable wood, is utilized for producing several handicrafts. The seeds, dried up and toasted, have been at times utilized, due to their taste, as replacement of the pepper, but we advise against this use due to the presence of toxic substances.