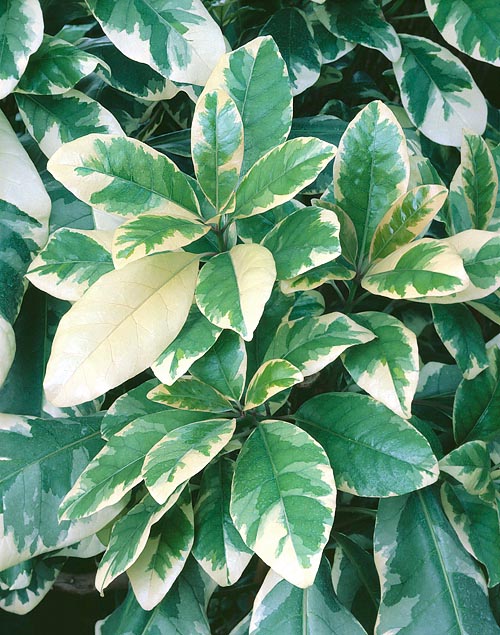 The genus is honoured to the Dutch physician and naturalist Willem Piso (1611-1678); the name of the species is the combination of the Latin terms “umbella” = umbrella, and “fero” = to carry, with reference to the shape of the inflorescences.

The Pisonia umbellifera (J.R. Forst. & G. Forst.) Seem. (1862) is a shrub or an evergreen tree, tall up to about 10 m, even if in the wild they have observed specimens reaching the 2o m. The leaves, on a 2-4 cm long petiole, are opposite or sub-opposite, at times in groups from two to five at the apex of the branches, elliptic or ovate-lanceolate, 10-35 cm long and 4-12 cm broad, leathery.

The inflorescences are terminal with compound umbels, of 5-12 cm of diameter, carrying white or pinkish, polygamous (hermaphrodite and unisexual present at the same time) flowers, having no corolla, with petaloid, funnel-shaped, calyx with 5 lobes, formed by the five sepals merged, about 6 mm long, and 7-12 stamina; the flowers are intensely perfumed.

The fruits are 5 ribs oblong achenes, 2-4 cm long and with a diameter of 0,6 cm, which exude a sticky substance with which they adhere to whatever they touch, in particular, birds, reptilians and insects which, in such a way, contribute to the dispersion.

It reproduces by seed, air layering or cutting in sandy soil kept humid at the temperature of 22-24 °C. In the wild, it is an amply diffused species in the Indo-Pacific area, of which is cultivated for ornamental purposes, as garden plant and also for indoor decoration, the variegated form Pisonia umbellifera ‘Variegata’, which has white and green, of various shades, variegations in the leaves, initially suffused with pink. It may be cultivated in open spaces in the tropical and subtropical climate zones, marginally in the warm temperate, in full sun or slight shade; the variegated form requires a semi-shaded position, seen that, in full sun, the white part of the foliar lamina burns out easily.

For what the minimum temperatures are concerned, the leaves get damage just below the 0 °C, the aerial part dies around the -3 °C. It is not particular about the soil, provided it’s well draining; in summer, the waterings must be regular, even if well rooted plants may resist to short dry periods. When in pot, for indoor decoration, the most possible luminous position is to be chosen, but the direct sun, utilizing a sandy substratum rich of organic substance; waterings must be regular in summer, reduced in winter, allowing the upper layer to dry up before giving water again.

The fruits, rarely produced in pot, due to the sticky substance they exude, are an element tending do discourage the cultivation of this plant in the gardens, seen that they adhere to shoes, dresses and hats and may cause, at times, the death of birds and small animals which are unable to get free; as a matter of fact, they were used by the local populations for seizing the birds.