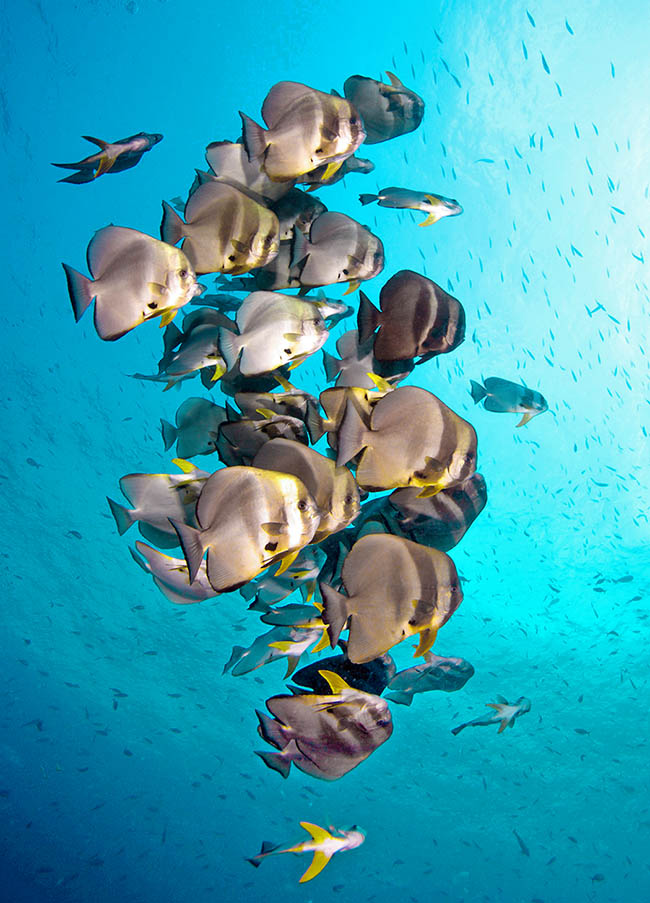 Platax teira ( Forsskål, 1775 ), commonly known as Longfin batfish belongs to the class Actinopterygii, the ray-finned fishes, to the order Perciformes and to the family Ephippidae, a group of fishes that existed already in the Eocene, like the Platax altissimus, one of the most famous fossils of Mount Bolca, in Italy. It dates back to 48-41 million years ago and is practically the same as the juvenile form of this species.

The name of the genus Platax comes from the Greek “πλατυς” (platys), wide, flat, with reference to the strongly compressed body.

That of the species teira, should come, always in Greek, from “τερας” (teras), monster, but some assert that it is the Latinization of the Arabic name “Teyra”, given to young specimens fished in the Red Sea.

The Longfin batfish is a species of the tropical Indo Pacific that belongs to the now numerous species, defined lessepsian, that have reached the Mediterranean through the Suez Canal.

Indicatively, we find it, starting from the Red Sea and the Gulf of Aden, in the coastal waters of eastern Africa, from Somalia to South Africa, including Madagascar and the islands of Réunion and Mauritius. It is then present in the Maldives, India,Sri Lanka, Andaman Islands, Thailand, Cambodia, Vietnam, Malaysia, Cocos Islands, Christmas Island and Timor-Leste, Australia and Papua New Guinea. Southwards, it reaches New Caledonia, Norfolk Island and New Zealand. Northwards, it is present in the Philippines, Taiwan, China, Ryukyu Islands, South Korea and Japan. Eastwards, it has colonized Micronesia and reaches the Fiji Islands.

The Longfin batfish is an amphridomous fish, that is, able to swim forwards or backwards indifferently.

Linked to the reefs, it usually frequents the shallow and calm waters of the lagoons between 3 and 25 m of depth. It loves to wander among the wrecks of old sunken vessels and mainly goes swimming in couples or in small schools of twenty individuals but were sighted schools of even hundred adults offshore. 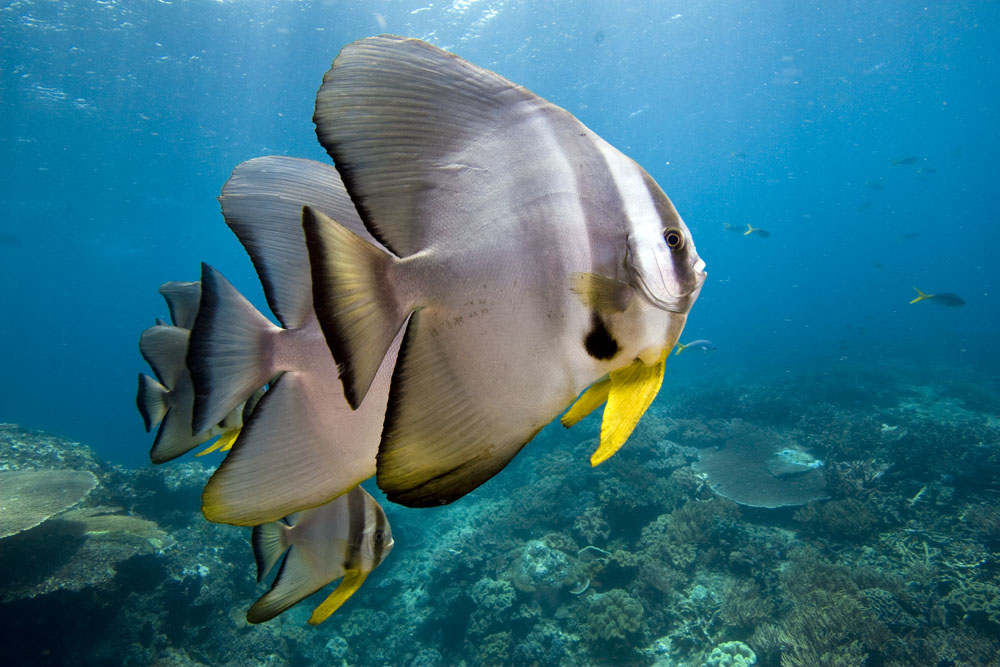 Present in most of tropical Indopacific, it seems having entered Mediterranean through the Suez Canal © Paddy Ryan

Young grow sheltered by floating debris, usually vast formations of algae, like sargassoes, that go drifting after the rain season. 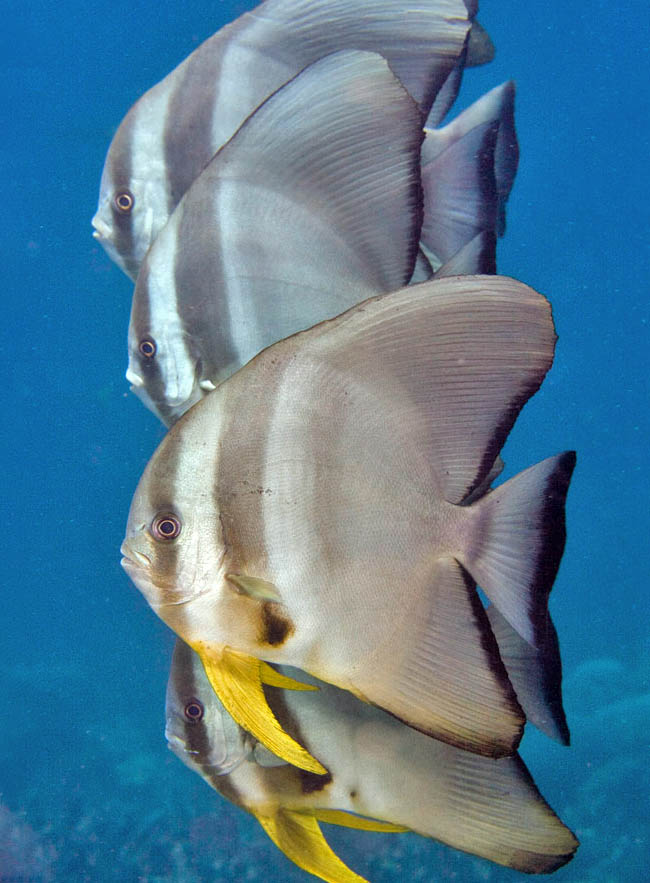 The adult livery is brownish grey with at least two dark vertical bands.

The first, as often is the case in the world of fishes, disguises the eye, whilst the second one, wider, has down below, under the pectoral fins, a huge black spot, an important element of distinction with the Platax orbicularis, often present in the same waters.

The pelvic fins, dark at times, are usually yellow, colour we find, attenuated, also on the other fins, mainly ending with dark border.

The eyes are large, the mouth is small with jaws covered in bands by thin and flattened three pointed teeth, the longest in the middle, to cut the algae.

The Longfin batfish is a very curious omnivore that often approaches the divers. It nourishes, besides algae, of jellyfishes, zooplankton and small benthic invertebrates.

Like many fishes, it can quickly change colour: visual signals mainly used in the “cleaning stations” where the big fishes go for getting the parasites removed from the skin by the wrasses and other willing minnows.

There is no sexual dimorphism. The eggs, fecundate while swimming, are pelagic as well as the larvae that begin to get coloured vhen about 5 mm long, when the first black band that hides the eyes appears.

Even if the juvenile livery is quite attractive, with those elegant faciform fins, it is not a fish suitable for the domestic aquaria because it grows too fast. So much so that, after some, the sightings in the Mediterranean were due to aquarists who, tired of their cumbersome guests, have freed them in the sea.

This species, with its flesh theoretically edible but surely not prized, is consequently, for its good luck, poorly fished.

As a matter of fact, the resilience of the Longfin batfish is low, with a minimum time of 4,5-14 years for doubling the populations decimated by the events. As a consequence, presently (2021) the vulnerability index of Platax teira is already moderately high, marking 52 on a scale of 100. 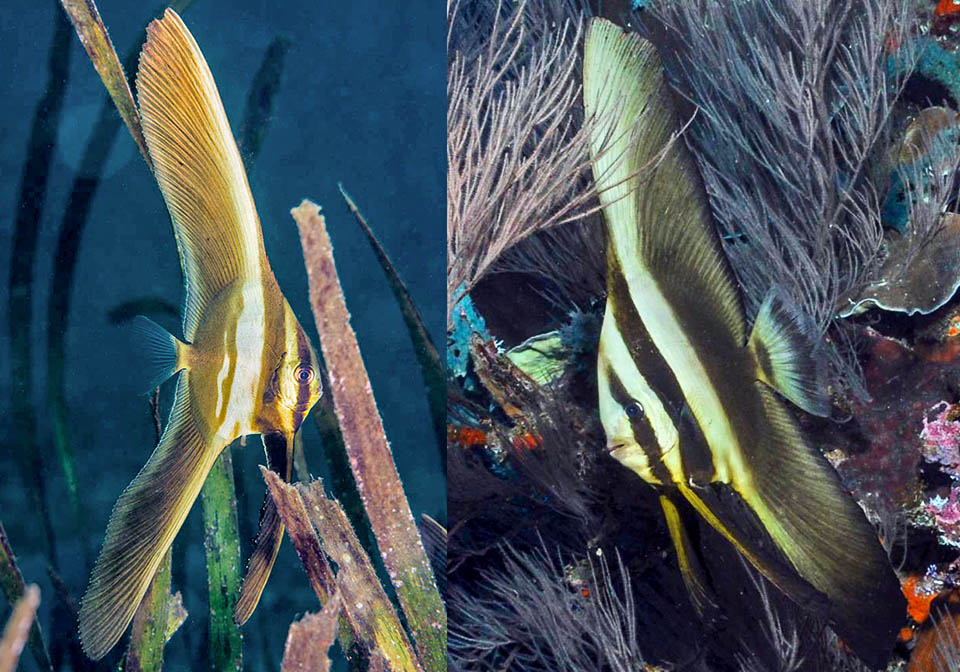