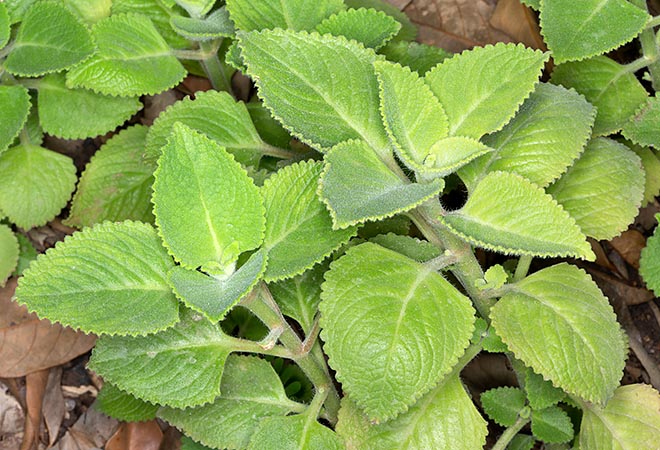 The species is native to Angola, Burundi, India, Kenya, KwaZulu-Natal, Mozambique, Swaziland and Yemen where it grows in open air on slopes and rocky outcrops.

The name of the genus comes from the combination of the Greek substantives “πλῆκτρον” (plectron) = plectrum, small piece of ivory or other material almond-shaped used for plucking the strings of the lyre, and “ἄνθος” (anthos) = flower, with reference to the shape of the rear of the corolla; the name of the species is the Latin adjective “amboinicus, a, um” = of Ambon, Indonesian island, presumed place of origin.

The Plectranthus amboinicus (Lour.) Spreng. (1825) is a ramified, 30-90 cm tall, evergreen perennial herbaceous species, with fleshy, villous, rooting at the nodes, rather frail stems. The leaves, on a 0,5-3 cm long petiole, are simple, opposite, sub-cordate with crenate margins and rounded apex, 4-8 cm long and 4-6 cm broad, somewhat fleshy, villous, provided below with numerous glandular hairs, highly aromatic. The inflorescences are up to 30 cm long terminal racemes carrying sessile or sub-sessile flowers arranged in dense spaced verticils. The single flower has a bilabiate campanulate, villous, calyx 1,5-4 mm long, with ovate upper lip and lower one having 4 pointed teeth, bilabiate corolla, 0-7-1,2 cm long, of blue lavender colour with corolline tube slightly bent in the median part, erect upper lip, 4 mm long and 3 mm broad, with 4 lobes and entire lower lip, 5-6 mm long, concave, and 4 stamina. The fruit is a pale brown tetrachenium. It reproduces by seed, placed in surface on sandy loam maintained slightly humid at the temperature of 22-24 °C, with germination times of 1-3 months, but usually and easily by apical cutting in summer and by division in spring.

It is an amply diffused species in the tropical and subtropical countries for ornamental as well as for culinary uses in the family gardens. Of easy cultivation and of fast growth, can be cultivated in the zones with tropical and subtropical climate, as not standing temperatures around the 0 °C, if not dry and for very short time; it requires full sun and is not particular about the soil, even if poor, provided well drained as does not bear water stagnations. It is utilizable for edges, as soil cover and in the rocky gardens with moderate watering, allowing the upper layer of soil to dry up before giving water again; well rooted can bear long drought periods. Frequently cultivated in pot, especially for culinary uses and for sheltering it during the coldest months, where the climate does not allow the permanence in open air, in luminous position, like a south-looking window, with winter lowest temperatures not under the 10 °C and moderate and spaced watering, thus to allow the substratum to dry up partially, almost stopped in presence of low temperatures. Several varieties have been selected for ornamental purposes.

The fresh leaves are amply utilized, in particular in the Caribbean and south-eastern Asian cuisines, for aromatizing dishes of meat and of fish, for sauces, soups and salads, in India they are consumed as fried too; the aroma is usually defined as intermediate between the thyme (Thymus vulgaris L., 1753) and the oregano (Origanum vulgare L., 1753).

The plant occupies an important position also in the traditional medicine for various pathologies in the digestive, respiratory and neurological fields; to the essential oil extracted from the leaves are attributed anti-inflammatory, antioxidant, larvicide and antimicrobial properties.