The species is native to Ecuador (Esmeraldas) where it grows on the trees of the nebular forest around the 800 m of altitude.

The name of the genus comes after some from the combination of the Greek substantives “πλευρόν” (pleurόn) = rib, vein and “θαλλός” (thallόs) = stem, with reference to the stems of some species, after others from “πλευρόν” (pleurόn) = with the meaning of “side” and from the verb “θάλλω” (thallo) = to bloom, with reference to the position of the flowers at the conjunction between steam and leaf; the specific name is the Latin substantive “aspegillum” = aspersorium, implement used for spraying blessed water on persons or things, formed by a rod ending in a metallic holed sphere or in a tuft of bristles, with reference to the numerous floral peduncles persisting at the apex of the leaf. 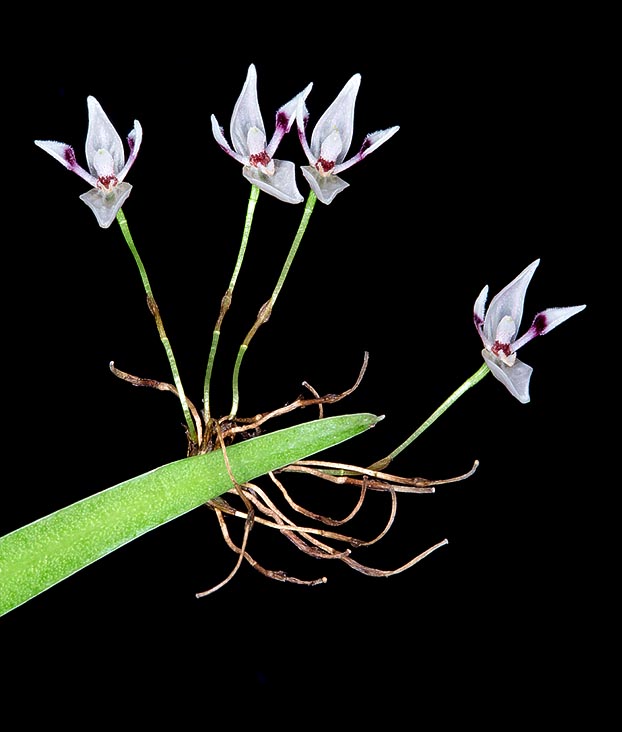 The Pleurothallis aspergillum Luer & Hirtz (1989) is an epiphytic caespitose species with thin and close erect stems, 5-12 cm long, encased by two thin tubular sheaths at the base and by another one just under the half, provided at the apex of a single sessile linear-elliptical leaf with acute apex, 8-20 cm long and 0,4-0,8 cm broad, coriaceous, of intense green colour.

Fascicular inflorescence on the median vein of the leaf, at 1-1,5 cm from the apex, with numerous flowers, of about 1 cm of diameter, of white colour with purple spot on the petals and orange at the base of the labellum, that open gradually; peduncle, pedicel and ovary 2-2,5 cm long.

It reproduces by seed, in vitro, and by division, with each section provided of at least 3-4 stems.

Floriferous orchid with tiny flowers produced for long time at the apex of the leaf, requires a shady and aerated location of cultivation, medium-high day temperatures, 24-32 °C, with lowest night winter ones preferably over the 18 °C, even if it can stand some degrees less, and constant high humidity, 80-90%. Regular waterings and nebulizations in order to maintain the substratum constantly humid, but without stagnations, utilizing rain water, by reverse osmosis or demineralized. It can be cultivated in pots or baskets with compost formed by medium sliced bark fragments, sphagnum and inerts to favour the drainage and the aeration of the roots, as well as mounted on logs or rafts covered by sphagnum. 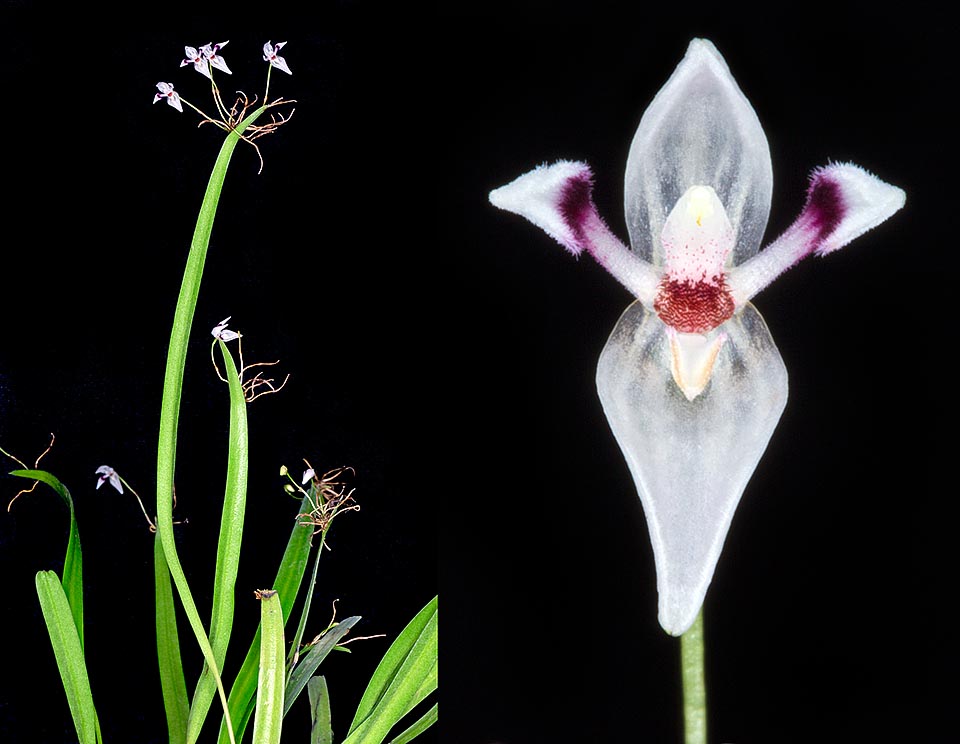 5-12 cm erect stems, close and thin. Fascicular inflorescence on the median vein of the leaf, 8-20 cm long, at 1-1,5 cm from the apex. Numerous flowers of about 1 cm © Giuseppe Mazza

The species is reported in the appendix II of the CITES (species whose trade is internationally ruled); moreover, is inserted in the red list of the IUCN (International Union for the Conservation of Nature) as “vulnerable” (species at risk of extinction in nature.