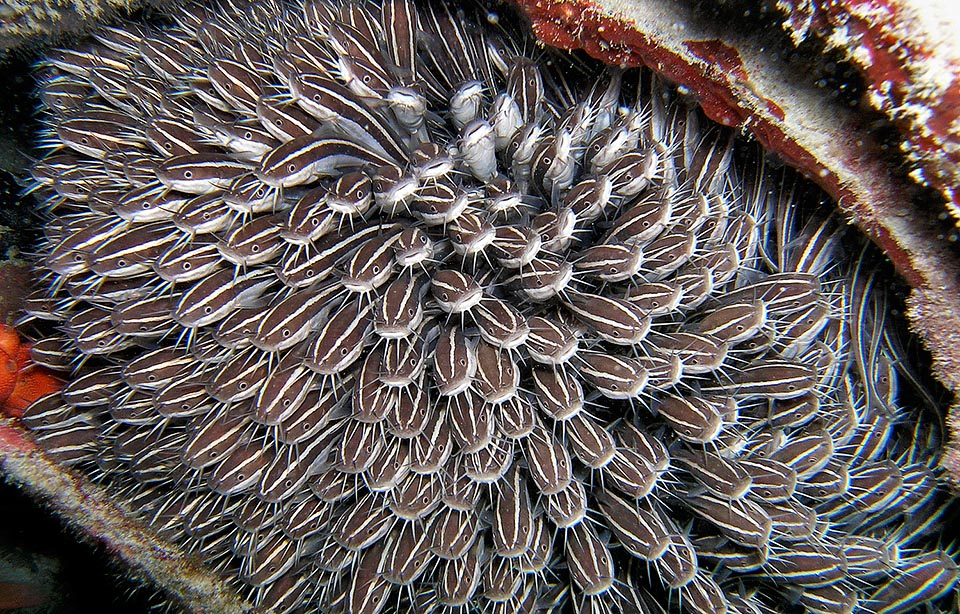 Showy school of Plotosus lineatus. With Paraplotosus albilabris, this species is a rare membre of the catfishes in the coral reefs © Sebastiano Guido

The Striped eel catfish (Plotosus lineatus Thunberg, 1787) belongs to the class of Actinopterygii, the ray-finned fishes, to the order of the Siluriformes and to the small family of Plotosidae, which counts 10 genera and about 40 tropical species, mainly marine, but also of fresh and brackish waters. The have the head adorned with barbels, as is convenient to a catfish; and the tail similar to an eel.

As a matter of fact, it is a striped fish that never stops. 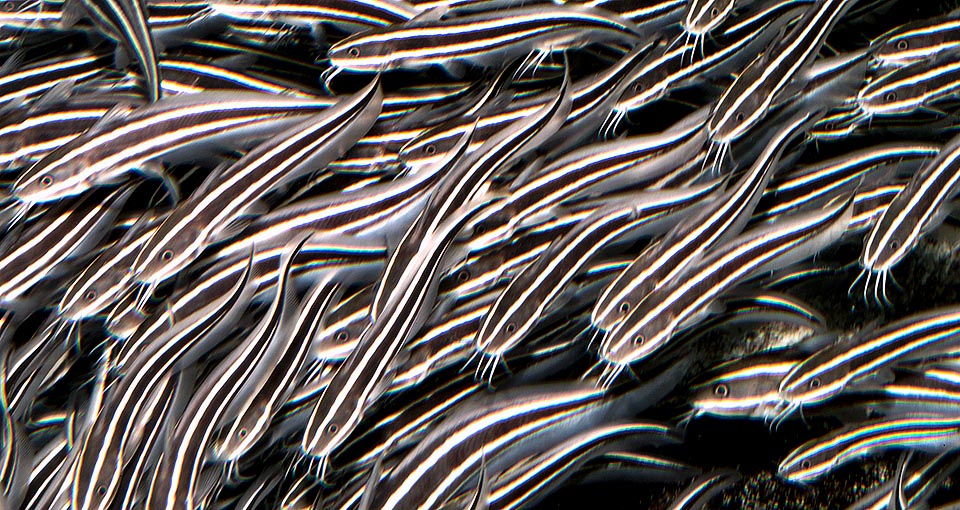 The young live in groups of 100-150 individuals. If menaced they form a ball to confuse the predators © Giuseppe Mazza

It has a vast distribution in the Indo-Pacific tropical waters. We find it, indicatively, along the African eastern coast from South Africa and Madagascar up to the Red Sea, to the Comoros, Seychelles, Réunion, Mauritius, Maldives and Andaman islands. Then in India, Sri Lanka, Indonesia, Australia, New Guinea, Micronesia, Philippines and the Ogasawara Islands in the southern part of Japan. Eastward, it has colonized the Samoa, Tonga and Cook islands and even California. Southward, in the Pacific, it reaches New Caledonia and Lord Howe.

Not content in having invaded the African fresh waters of the Malawi Lake and of Madagascar, this indefatigable navigator has entered, through the Suez Canal, also the eastern Mediterranean. It is, therefore, a “Lessepsian migrant”, so called in memory to Ferdinand de Lesseps, planner of the Canal. This phenomenon interests an increasing number of species, favoured also by the rising temperatures and by the dissolution of the Bitter Lakes, two zones with extremely high salinity crossed by the Canal, which, in the past, created an insuperable barrier for many species.

It is the only catfish present in the coralline barriers. However, being euryhaline, it often enters the estuaries and settles in the brackish lagoons. It can live in shallow waters, preferably on the sandy bottoms and the seagrass meadows, but can be found also at 50-60 m of depth on the outer side of the reefs.

It rarely exceeds the 30 cm. The body has no scales, a circular section decreasing towards the tail. The head is stocky, with big mouth adorned by 8 barbels: 4 on each jaw.
The dorsal fins are two. The first has a dangerous poisoned spiny ray; the second counts 69-115 soft rays which merge with the anal, slightly shorter with 28-82 unarmed rays. Also the pectoral fins, and this is an unusual thing, have a poisoned spiny ray close to 9-13 soft ones, whilst the ventral have 12 unarmed rays. Totally, therefore, we have three poisonous spines, invisible, because hidden under the skin, but connected to the relevant poison glands. The stings are very painful, often fatal for the unwary divers which have entered a school, and the livery, well characterized due to the unmistakable series of horizontal white stripes on brown-blackish background, serves as a warning.

With its barbels, that have a tactile and olfactory function, the striped eel catfish sounds the bottoms looking for crustaceans, gastropods, bivalves, annelids and small fishes. It can also eat seaweeds and, especially the juveniles, the debris. The adults live isolated or in small groups, but the juveniles, for defence, swim in schools of about 100-150 units. In case of danger, they form ball-shaped schools, like a sea monster, with hundreds of barbels pointing outwards in order to scare the predators. Then, once the alarm has gone, the ball elongates and gets away like a serpent on the bottom, surmounting the obstacles like a river in flood. 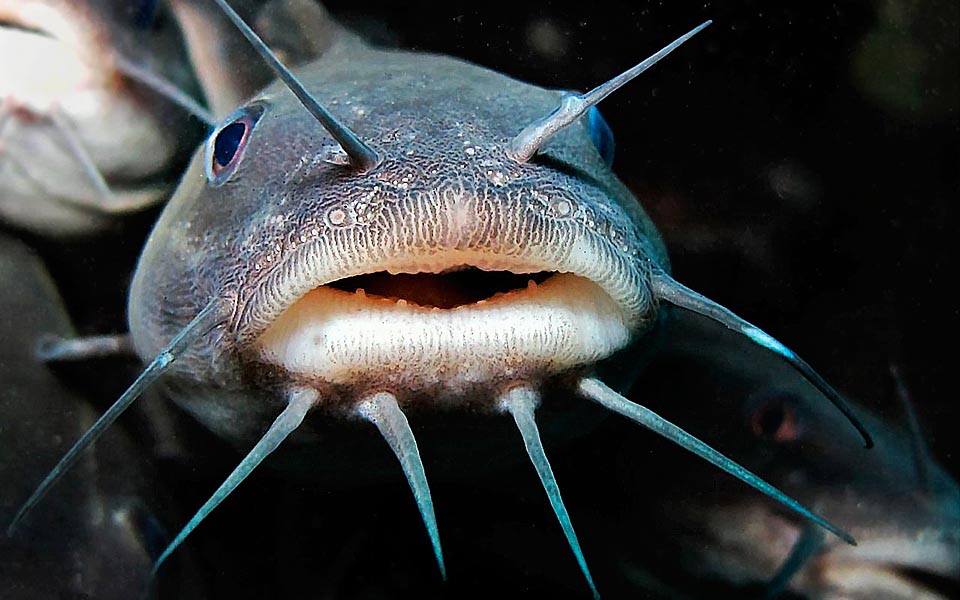 Typical Lessepsian species, through Suez Canal the Plotosus lineatus has recently entered Mediterranean, at the expenses of the local fauna © Sebastiano Guido

For the reproduction, the male builds a sort of a nest and invites the partner to spawn. After the fecundation, this one goes away and he keeps watching the eggs until the hatching. The larvae, pelagic, will be then dispersed by the currents. Edible, but of scarce value, the striped eel catfish, which can live 7-10 years, is frequent, due to the spectacular school in tumultuous movement, in the great public tropical aquaria.

The resiliency is relatively good, with populations that can double in 1,4-4,4 years and the vulnerability index of the species is presently low: 28 on a scale of 100.

Plotosus lineatus was last modified: May 3rd, 2022 by Giuseppe Mazza