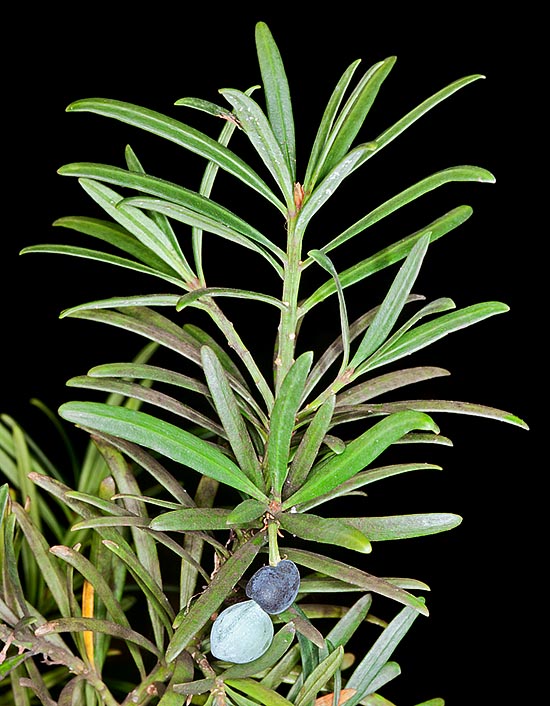 The species is native to China (Anhui, Chongqing, Fujian, Guangdong, Guangxi, Guizhou, Henan, Hong Kong, Hubei, Hunan, Jiangsu, Jiangxi, Kin-Men, Macau, Ma-tsu-Pai-chúan, Shanghai, Sichuan, Zhejiang and Yunnan), Japan, Myanmar and Taiwan, where it grows in the forests from the sea level up to about 1000 m of altitude.

The name of the genus is the combination of the Greek terms “pús, podόs” = foot and “karpόs” = fruit, with reference to the shape of the fruit of the first species described; the Latin name of the species “chinensis” = of China, refers to one of its origin places.

The Podocarpus chinensis Wall. ex J.Forbes (1839) is a shrub or an evergreen dioecious (each individual carries either only male flowers or female ones) tree which usually does not exceed the 10 m of height, with bark from grey to grey-brown which flakes in thin scales and wide upper crown.

The leaves are sessile (without petiole), spirally placed, coriaceous, obovate-lanceolate with prominent central nervation and slightly curved margins, 3-7,5 cm long and about 0,6 cm broad, with blunt or slightly pointed apex, of glossy dark green colour on the upper page, paler below.

Axillary male cones, on short peduncle, in groups of 3-5, 3-5 cm long, provided at the base with several triangular bracts, strongly modified female cones, solitary at the axil of the leaves, with few bracts at the base fused of which one, rarely two, fertile; when ripe the receptacle becomes fleshy, about 2,5 cm long, initially glaucous green, then reddish and finally dark violet surmounted by one, rarely two, ovoid seeds, of about 1 cm of diameter, covered by a thin fleshy layer, called “epimatium”, of glaucous green colour.

It reproduces by seed, which may take up to two years for germinating, and, easily, by semi-woody cutting and grafting. 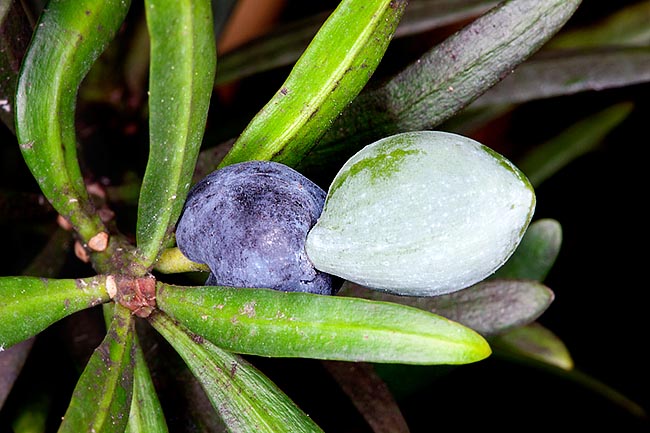 The slightly toxic fruit, at first green, then red then violet is surmounted by an ovoid seed © Giuseppe Mazza

Very ornamental conifer mostly cultivated in the subtropical and warm temperate climate zones, where it appears to stand lowest temperatures up to about -8 °C, in full sun, for a better growth, but bears also the shade.

It is of remarkable landscape effect as isolated specimen, in rows, for border fences and in particular for road trees, as not having invading roots; it stands well the prunings and resists to the saltiness, and therefore can be employed not far from the sea.

It adapts well also to the cultivation in pot for the decoration of patios, terraces and verandahs, and is an excellent subject for bonsai.

The “fruits” are slightly toxic and it is better to avoid their consumption.