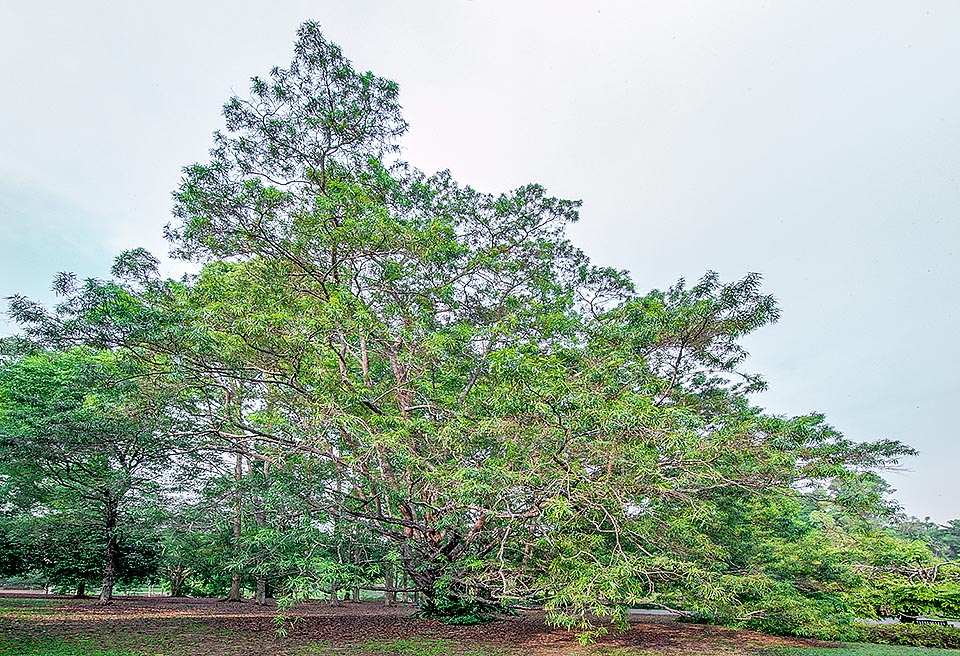 Native to South-East Asia and part of Oceania, Podocarpus neriifolius is a dioecious evergreen with 1 m diameter trunks and 25 m of height © Giuseppe Mazza

The species is native to Andaman Islands, Assam, Borneo, Cambodia, Fiji, Laos, Myanmar, Nepal, Peninsular Malaysia, Philippines, Solomon Islands, Sulawesi, Sumatra, Thailand and Vietnam where it grows in the evergreen humid forests from the sea level up to about 2000 m of altitude.

The name of the genus is the combination of the Greek substantives “πούς, ποδός” (pús, podόs) = foot and “καρπός” (karpόs) = fruit, with reference to the shape of the fruit of the first species described; the scientific term is the combination of the name of the genus Nerium and of the Latin substantive “folium, ii” = leaf, therefore, “oleander leaf like”. 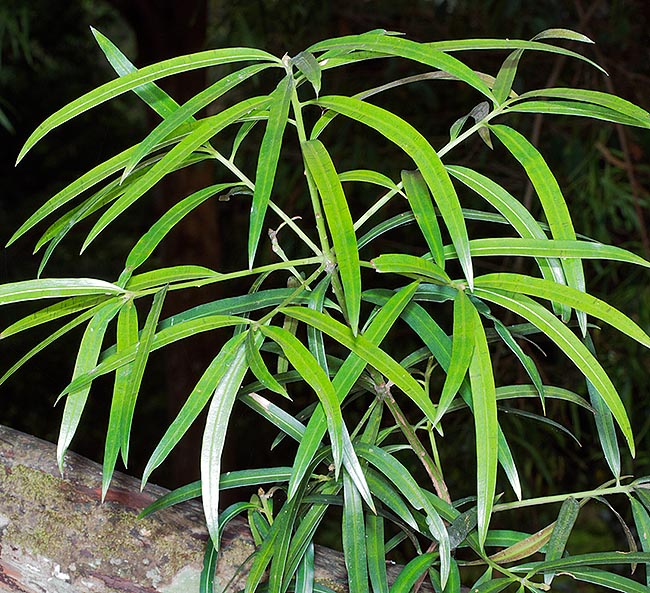 The spirally arranged leaves have suggested the scientific name to the species as they remind the oleander ones. They can be 5-16 cm long and 1-2 cm broad. Their decoction cures rheumatisms and joints © Giuseppe Mazza

The Podocarpus neriifolius D.Don (1824) is an evergreen dioecious tree, 15-25 m tall, rather variable, with erect trunk, of up to 1 m of diameter, and bark from grey to grey-brown that flakes off in thin longitudinal scales. The leaves, spirally arranged on an about 0,4 cm long petiole, are simple, lanceolate with long pointed apex, entire margin and prominent central vein, 5-16 cm long and 1-2 cm broad, coriaceous, of intense glossy green colour. Axillar sessile male cones, solitary or in groups of 2-3, 3-5 cm long, provided at the base of numerous sterile bracts spirally arranged, initially green, then reddish. Female cones, on a 1-2 cm long peduncle, axillar, solitary, with two merged bracts and fleshy when ripe to form the receptacle, initially green, then orange red to dark purple, 1-2 cm long, topped by an ovoid seed, 1-1,5 cm long, covered by a thin fleshy layer, called “epimatium”.

It reproduces by seed, previously kept in water fro two days, in draining loam maintained humid at the temperature of 24-26 °C, with quite long germination times, from one month to one year, and by cutting, somewhat difficult to root, utilizing a portion of apical branch.

Species diffused in nature and in cultivation, of economic importance in the origin zones due to the wood of excellent quality, that is utilized locally as well as exported. Cultivable in the tropical, subtropical and marginally warm temperate climate zones, where it can resist for very short periods at temperatures just under the 0 °C. Requires full sun, but during the first years of life, when it bears a light shade, and grows on an ample variety of soils, acidic to ultrabasic, even if it prefers the acidic ones, draining and fertile; resists to the marine aerosols and when adult to periods of drought. Of remarkable ornamental characteristics due to the foliage, is utilizable as isolated specimen or for fences and border barriers, bearing well the prunings, and as road tree; of slow growth is also an excellent subject for bonsai. Wood of yellowish colour, light, easy to work and refine, relatively little resistant to the atmospheric agents, but resistant to the xylophagous insects, utilized in the constructions of dwellings for inner parts, boats, furniture, handicrafts and artistic objects, musical instruments and in the paper industry. The decoction of leaves is utilized in the popular medicine as lenitive of rheumatic pains and of those of the joints. 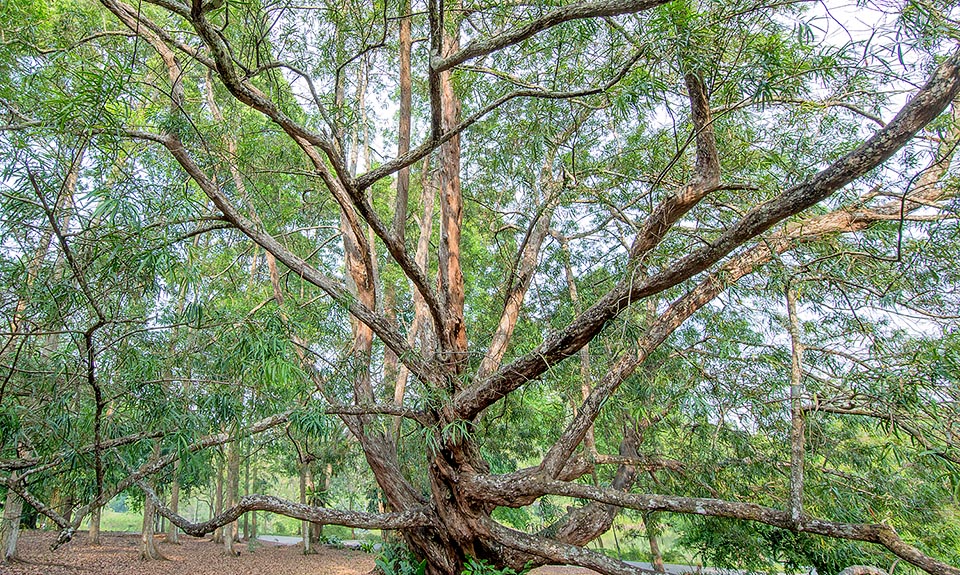 Very ornamental slow growing species. Bears saltiness and is cultivable even as fence. The wood, easy to work, resists to the xylophagous insects © Giuseppe Mazza

The species, upon Nepals request, has been inserted in the Appendix III CITES (species whose exportation from the requesting country is submitted to controls).