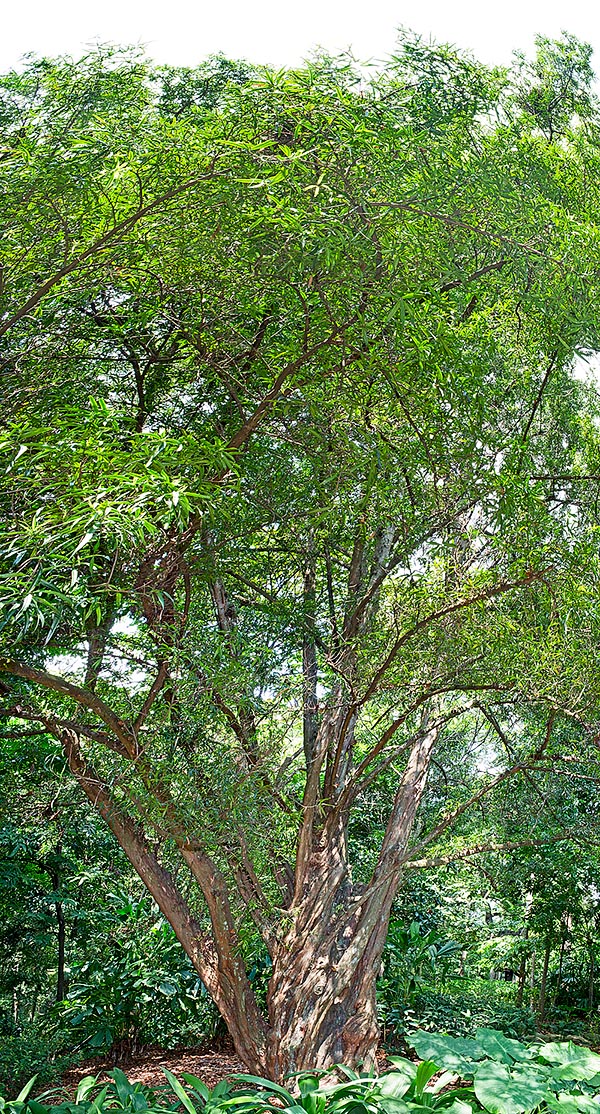 Podocarpus rumphii is a dioecious evergreen tree that reaches 40 m in height and 80 cm in diameter. Not widely cultivated but well distributed through the rainforests of Southeast Asia © Giuseppe Mazza

The species is native to Borneo, China (Yunnan), Java, Lesser Sunda Islands, Malaysia, Moluccas, New Guinea, Philippines, Sulawesi and Sumatra where it lives in the pluvial forests from the sea level up to about 1600 m of altitude.

The name of the genus is the combination of the Geek substantives “πούς, ποδός” (pús, podόs) = foot and “καρπός” (karpόs) = fruit, with reference to the shape of the fruit of the first species described; the species is dedicated to the German botanist Georg Everhard Rumpf (1627-1702), author of the Herbarium Amboinense posthumously published in 1741.

The Podocarpus rumphii Blume (1849) is a dioecious evergreen tree, 15-40 m tall, with erect trunk, of 30-80 cm of diameter, with brown-reddish bark slightly wrinkly that flakes off in thin longitudinal scales. The leaves are simple, sessile or subsessile, at times arranged in verticils of three or four in the young buds, alternate and pointing to various directions or at times distichous in the adult plants, tendentially hanging, of linear-lanceolate shape with pointed apex, entire margin and prominent central vein, coriaceous, of glossy intense green colour, 12-25 cm long and 0,8-1,7 cm broad. Sessile axillar male cones, solitary or in groups of 2-8, cylindrical, 3-5 cm long, provided at the base of several sterile bracts spirally arranged, initially green, then reddish, two microsporophylls (modified leaves that bear the pollen sacs) carrying each one two pollen sacs. Female cones, on a 2-3 cm long peduncle, axillar, usually solitary, with two bracts merged and fleshy when ripe forming the receptacle, initially green, then red orange to dark purple, 0,8-1,5 cm long, surmounted by an ovoid seed, 0,8-1,5 cm long and of about 1 cm of diameter, covered by a thin fleshy layer, called “epimatium”, glaucous.

It reproduces by seed, previously kept in water for two days, in draining loam maintained humid at the temperature of 24-26 °C.

Relatively diffused species in nature, quite similar to Podocarpus neriifolius (1824), but contrary to this rarely cultivated, present almost exclusively in botanical gardens. Due to the ornamental foliage it could be advantageously utilized as isolated specimen or in group in parks and gardens and as road tree of the tropical, subtropical climate zones and marginally in those, milder, temperate-warm ones. It requires full sun, but in the first years of life, and is not particular about the soil, provided draining; has a moderate resistance to the marine aerosols and when adult to periods of drought.
The wood, yellowish, is of good quality, medium heavy and hard resistant to the attacks of the xylophagous insects, easy to work and to refine, is locally utilized in the constructions for beams and floors, for carpentry, furniture, pools, boats, handicrafts and artistic objects. 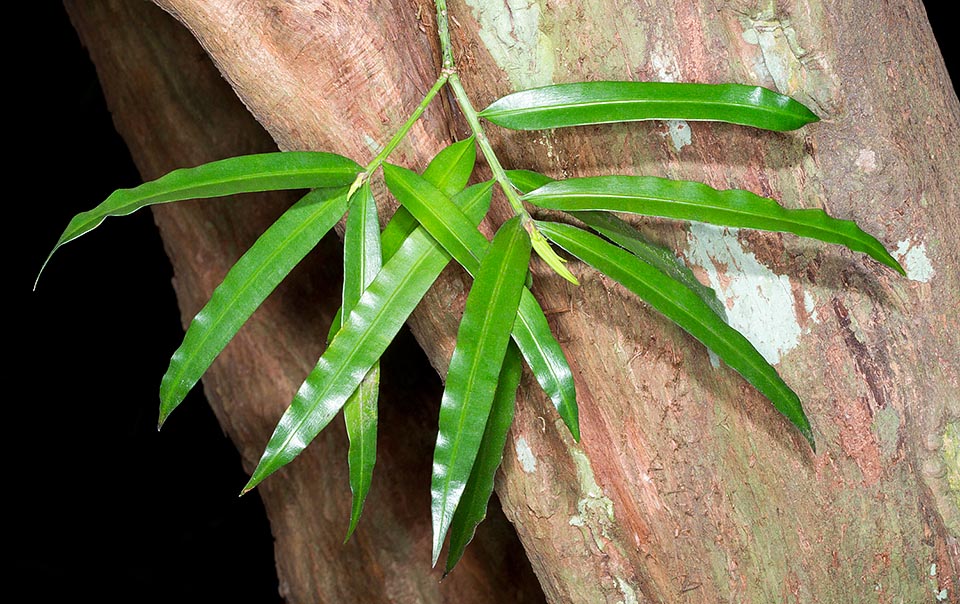