The genus Pogona, from the Greek “pogon” = beard, includes 8 species of saurians belonging to the family of the Agamidae. Endemic to the Australian continent, they are all diurnal and reach the 50-70 cm, half ow which concern the tail.

The Eastern bearded dragon (Pogona barbata) confirms with the Latin adjective “barbatus” = with the beard, the showy presence in this species of sharp scales forming a sort of a black beard around the neck, well visible when the animal, annoyed, spreads the skin and hisses threatening with the big mouth open with its horrific intense bright yellow colour. 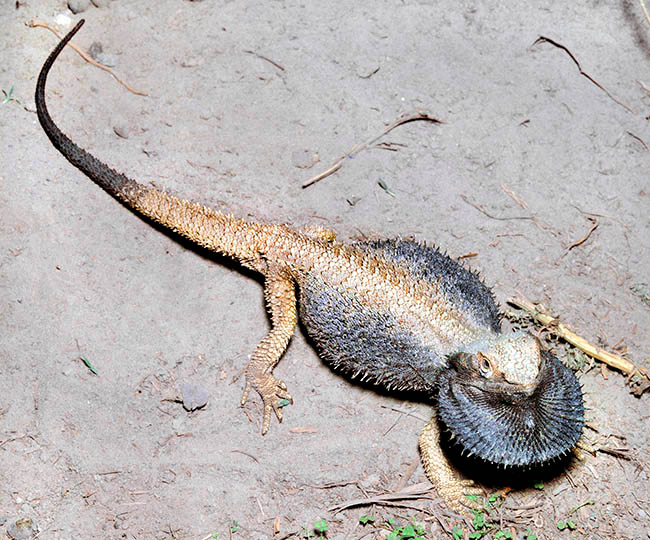 Pogona barbata is a diurnal semi arboreal Australian agamid that can reach the 60-70 cm. Present in Queensland and in the South-east of continent, it displays a flat body, mostly grey but also yellowish or brown with characteristic lateral spines on the sides. The tail and the spiny “beard”, more pronounced in the males, are black. When it is disturbed, it inflates the body and the throat erecting the spines and hissing with the big open mouth yellow inside © Giuseppe Mazza

As states its vulgar name, the Eastern bearded dragon, occupies the south-eastern part of Australia and is present in New South Wales, Queensland, South Australia and Victoria.

Semi-arboreal, the Pogona barbata loves warming up in the sun on the well exposed branches and trunks. The male, bigger, dominant, is more territorial and aggressive than the analogous Central bearded dragon (Pogona vitticeps). It has the right of the highest roost and from there surveys its hunting zone, allowing only the young and the females to enter the same. Only when the heat gets unbearable, it goes down to rest in cooler places.

The head of the Eastern bearded dragon is big and triangular. The thorax and the abdomen are relatively slender and flat dorsoventrally.

Usually the colour of the back tends to grey, but can be also brown-reddish, brown-yellowish or dark brown. When excited, or when the temperature is high, the sides and the legs may become yellow-orange. The females are slightly smaller.

When biting it does not leave easily the prey also because both jaws bear ancestral venomous glands and the toxins are not injected but do slowly penetrate the wounds. 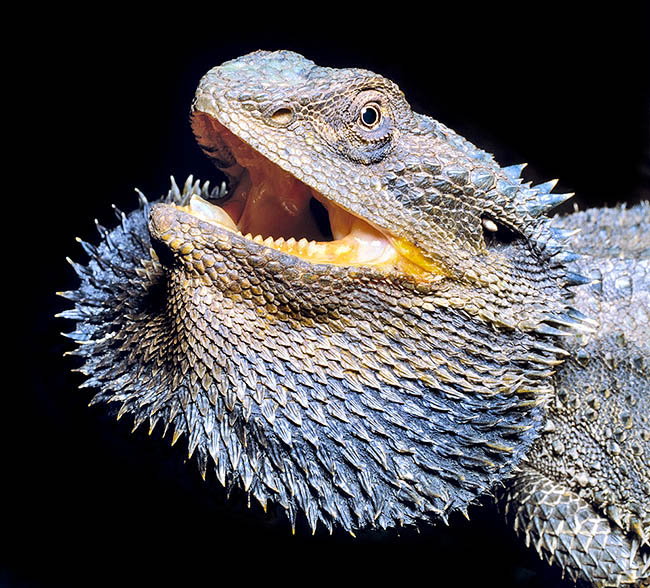 It easily distinguishes from the Pogona vitticeps, more corpulent and pink-reddish fauces, also due to the row of spines present along the lateral edge of the body up to the forearm.

The Pogona barbata nourishes of insects, worms, molluscs and small vertebrates like mice and young lizards without forgetting berries, flowers and other juicy vegetal inputs.

The females reproduce several times per year burying 15-35 eggs not surveyed in a little deep nest dug in the sand.

It is not new that the temperature of incubation may determine the sex of a reptilian, but here recently it has been discovered that when the temperatures are very high some adult males may turn into fertile females, even if conserving the male chromosomes.