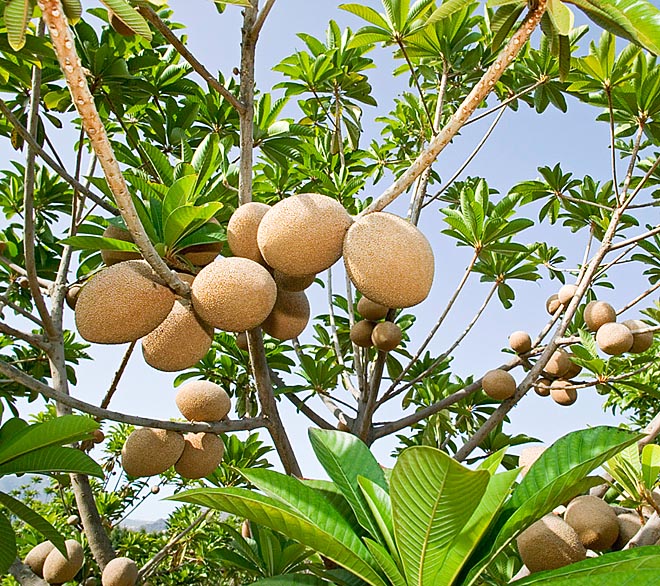 The name of the genus comes from the Carib name “pourouma pouteri” of the Pouteria guianensis Aubl. (1775).

The name of the species comes from “tzapotl” which, in the Nahuatl language, generically designates a roundish fruit with morbid and sweet pulp and big seeds. 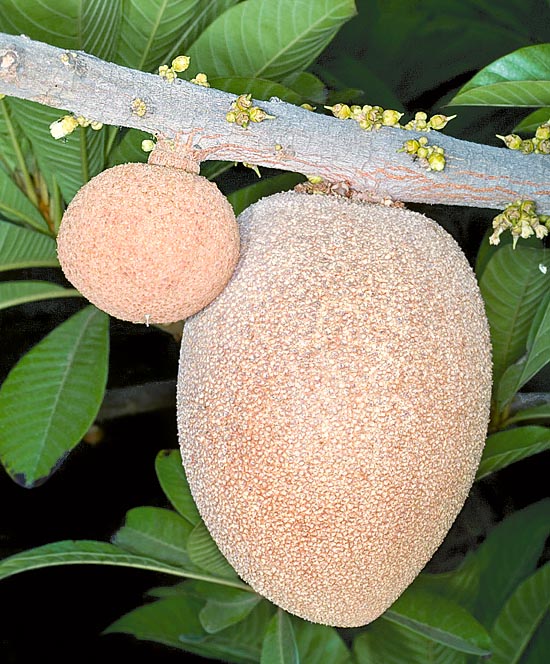 The showy berries, even 15 cm broad and 20 long, can approach the 3 kg © Giuseppe Mazza

The leaves, on a robust petiole about 4 cm long, alternate, spirally arranged at the apex of the branches, are simple with ovate, lanceolate or oblanceolate shape with pointed apex, 10-40 cm long and 5-12 cm broad, of glossy dark green colour on the upper page, paler below.

The white flowers, almost sessile and united in groups of 2-6 at the nodes of the terminal branches having no leaves, immediately before the part with the new foliage, are tubular, about 1 cm long, with 6-8 sepals thickly hairy spirally arranged, 4-5 petals and 5 fertile stamina and 5 sterile (staminodes).

The fruit is a berry of much variable shape depending on the variety, from spherical to fusiform, up to 20 cm long and 15 cm broad and weight from 250 g to 3 kg, with permanent calyx, brown wrinkled and coriaceous skin, and pulp, when ripe, morbid and creamy, sweet, with few fibres, of orange to salmon red colour. Usually the fruit contains on seed only, less frequently 2-4, of ellipsoidal shape and glossy brown colour; 5-10 cm long and up to about 4 cm broad.

It reproduces by seed, to be interred as soon as taken off from the fruit as it has short lasting germinative capability, vertically placed in sandy loam with the pointed part pointing downwards and leaving uncovered the upper part; the germination times vary from 4 to 10 weeks, but may be reduced by scarification.

Initially, the growth is rather slow, with production starting from 8-10 years, and generates individuals with fruits very variable in size, shape and organoleptic characteristics.

In order to reduce the times of production and reproduce a certain variety, the grafting is used, even if the percentage of success is relatively low. As rootstocks are utilized 7-9 months old seed plants and as scion terminal branches without leaves of the chosen variety of a length of 12-15 cm and a diameter of 1,5-1,8 cm; the best results are obtained with lateral grafting. 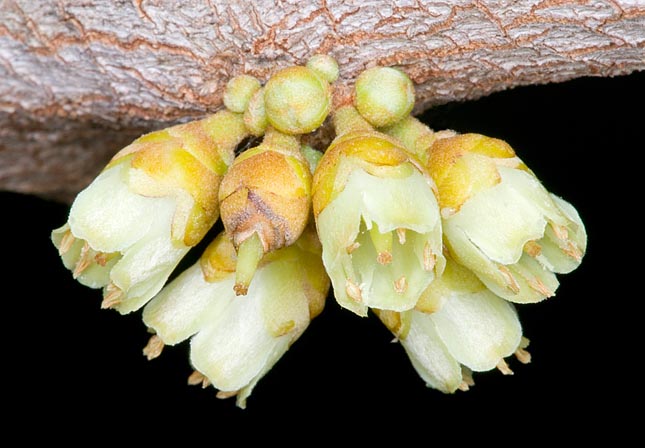 It is a species cultivable in full sun in the humid tropical climate zones on various types of soils, even heavy, provided deep, with good drainage and slightly acidic or neutral; the optimal temperatures must, as an average, be more than 25 °C, with lowest values not under the 15 °C, even if a mature tree can bear with little damage temperatures just under the 0 °C for a very short time, and annual rainfall not under the 1000 mm, in zones with greater rainfall and well distribute the fructification is practically continuous.

It is a fruit known and particularly appreciated already in pre-Columbian times, but almost unknown out from the origin zones and which should deserve a greater diffusion due to its contents of sugars, proteins, minerals and vitamins, especially A and C.

It can be consumed fresh or utilized for preparing jams, drinks, jellies, ice creams and cakes; the seeds, even if rather toxic for the contents in amygdalin, a glycoside capable to free hydrocyanic acid, are used for preparing candies and in some zones of Central America they are added, grounded, to the cocoa for getting a chocolate with a characteristically bitter taste. 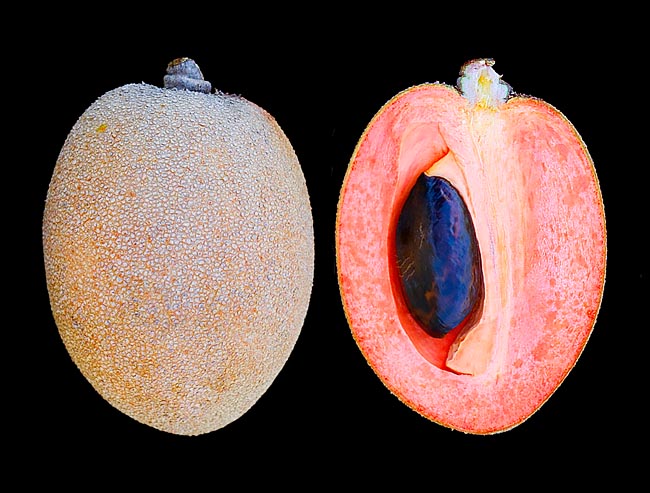 Dissected fruit with seed. Rich in sugars, proteins, minerals and vitamins A and C © Giuseppe Mazza

Furthermore, the seeds contain about the 50% of oil which, refined, is utilized in the cosmetic and pharmaceutical industries, and as lubricant, as well as in the traditional medicine together with other parts of the plant. The latex coming out from the unripe fruits, and in particular from the trunk, besides being utilized against the mycoses of the skin, was employed, already in pre-Columbian times, for producing the “chictli”, as sort of a chewing-gum; the fresh latex can be much irritant for the skin and the eyes, it is therefore necessary to avoid its contact. The vivid red to dark red wood, hard and resistant, fine grained an easy to work, is used in the buildings and for realizing prized furniture and commonly used objects.