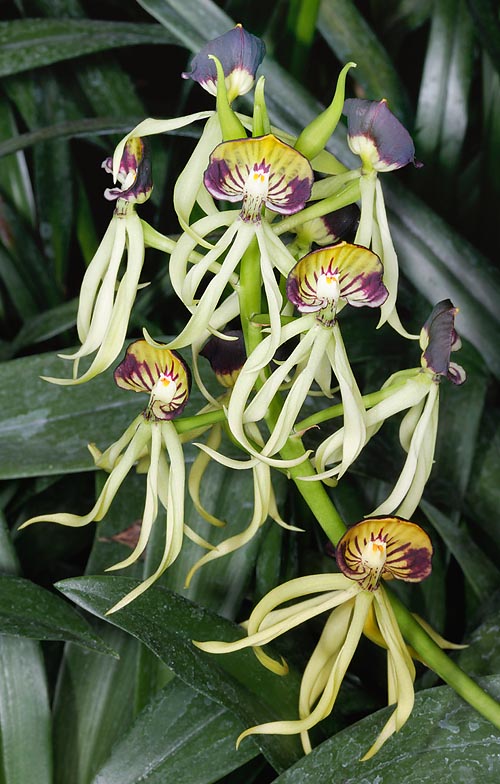 The Prosthechea cochleata (L.) W.E.Higgins (1998) is an epiphytic species with ellipsoid or piriform pseudobulbs rather flattened, 5-20 cm long and 1-4 cm thick, with at the apex 2-3 elliptic-lanceolate leaves, 5-30 cm long and 1-6 cm broad.

The inflorescences are terminal, racemose, up to 45 cm long, initially contained in a flat bract (spathe), which is in charge to protect it in the initial phase of its development, carrying several flowers, lasting about one month, which open in succession, for about 5-7 months, 2-6 of which, completely open.

Sepals and petals have a greenish white colour spotted of purple at the base, where stands out the labellum, pointing upwards, of dark purple colour with greenish grey stripes; there is a form which is wholly cream white.

The sepals and the petals are lanceolate, twisted, 3-7 cm long and about 0,5 cm broad; the labellum, shell-shaped, is about 2 cm long and 2-3 cm broad.

The plants growing in Florida have the particularity of having three anthers, instead of one only, and of being self-fertile.

It reproduces by seed, in vitro, by division, by the time of the vegetative renewal, and through the old pseudobulbs without leaves even if detached separately.

It is a species of easy cultivation and with a very long flowering attracting for the shape and the particular disposition of its flowers, with the labellum turned upwards, contrary to the vast majority of the orchids.
In spring-summer, during the vegetative period, it requires a slightly shaded position, medium-high temperatures, abundant and regular waterings, and high atmospheric humidity, 60-80%.

In winter, when it is not vegetating, the waterings are to be reduced, but without ever leaving the compost to dry up completely, the luminosity must be high, up to the full sun in the morning, with minimum night temperatures not less than 14-15 °C, even if it is capable to stand lower temperatures for a very short time. Good ventilation is essential during all seasons.

For the waterings and the nebulisations is to be used rainwater, or water obtained by reverse osmosis, or demineralised; the fertilizations, duly distributed and alternated, in way to avoid salts accumulations at the roots, are to be done during the vegetative period preferably with hydro-soluble balanced products, with microelements, at ¼ of the dosage suggested on the package.

It can be mounted on bark, raft of cork or of roots of arborescent ferns or cultivated in pots or baskets with much draining and aerated compost, which may be formed by medium sliced bark fragments, chips of expanded polystyrene and charcoal.