From South Africa. The Proteas. Multiform, exactly like the Greek god Proteus, from whome they get their name, they have showy inflorescences, mostly pollinated by birds. The patient work of hybridisation in flower industry. How we can cultivate them. 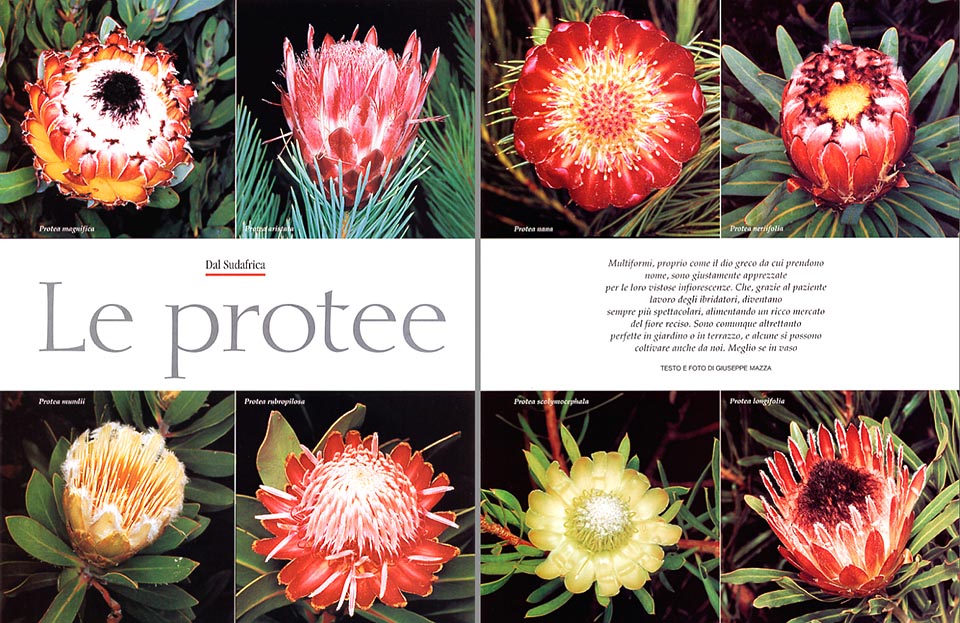 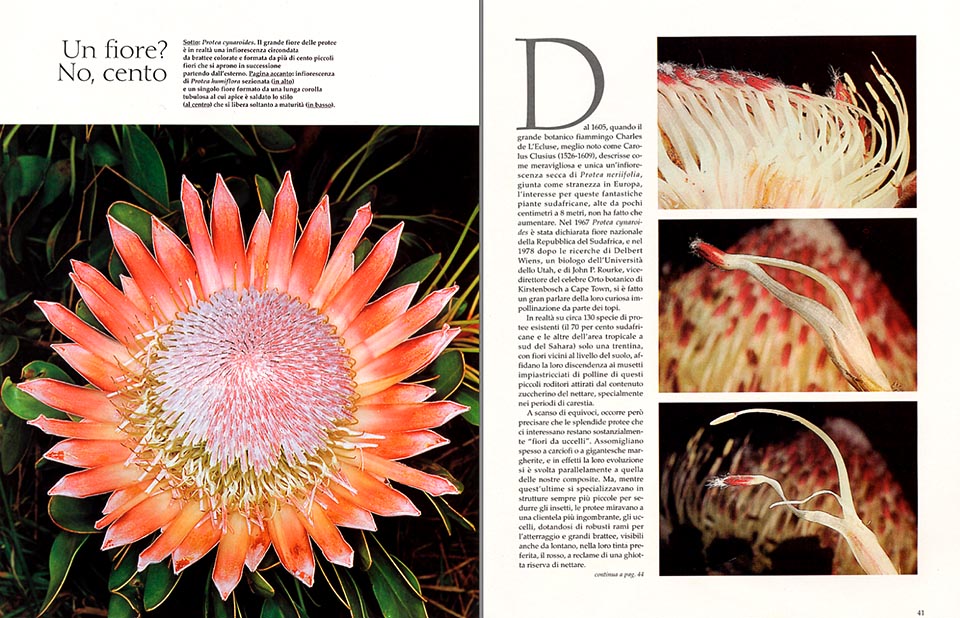 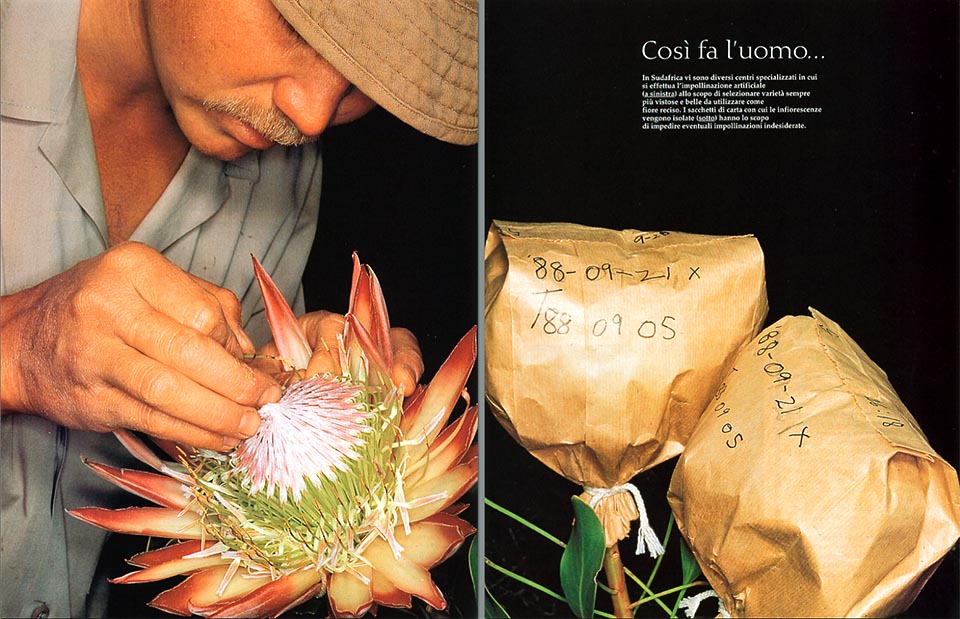 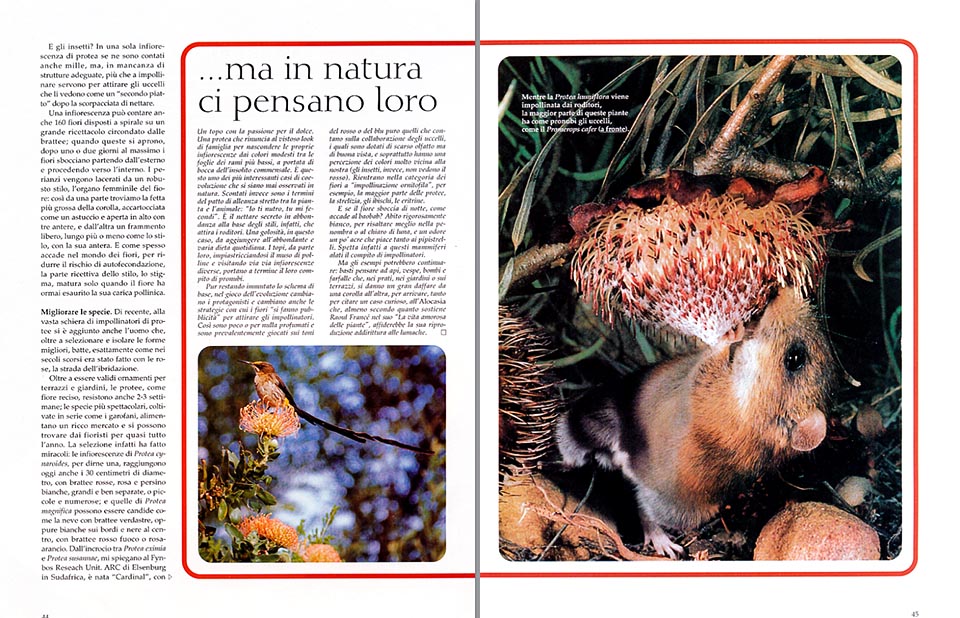 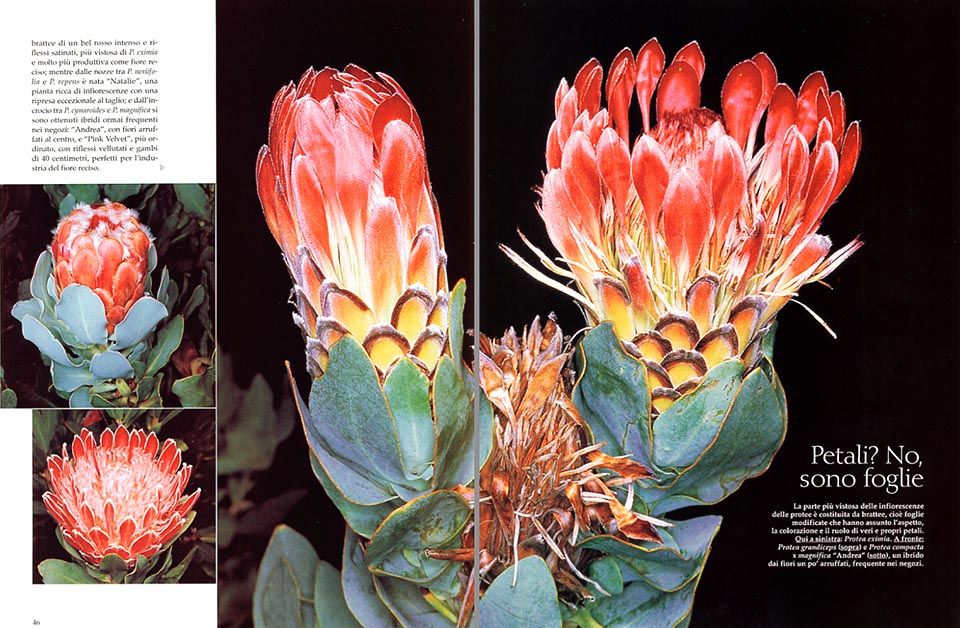 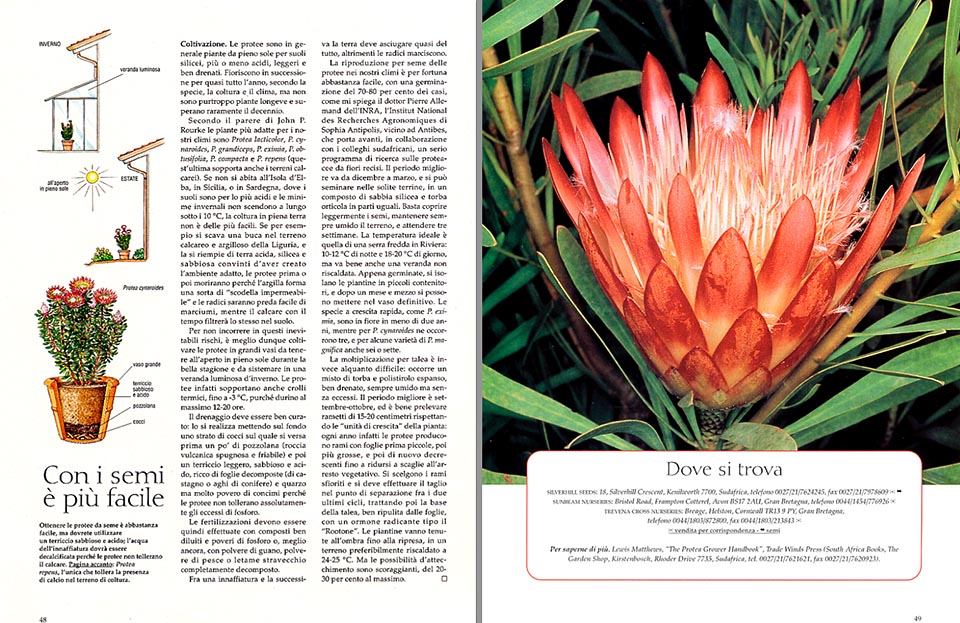 From 1605, when the famous Flemish botanist Charles de l’Ecluse better known as Carolus Clusius (1526-1609), described as wonderful and unique a withered inflorescence of Protea neriifolia, which had come to Europe as an oddity, the interest for these fantastic South African plants, tall from a few centimetres up to 8 metres, has been increasing without respite.

In 1967, the Protea cynaroides has been declared national flower of the Republic of South Africa, and in 1978, following to the researches done by Delbert Wiens, a biologist of the University of Utah, and of John P. Rourke, vice-director of the famous botanical garden of Kirstenbosch, in Cape Town, they have been talking quite a lot about their unusual pollination, which is effected by mice.

As a matter of fact, of the 117 existing species of proteas, for the 70% South African, and the others of the tropical area south of Sahara, about thirty only, with flowers close to the ground, entrust their progeny to the pretty little faces, soiled with pollen, of these small rodents, attracted, particularly in times of famine, by the sugary contents of the nectar. But, to avoid all misunderstandings, the splendid proteas which interest us, are, mainly, “bird flowers”.

Sometimes, they are like artichokes, or gigantic daisies, and, indeed, their evolution has occurred in the same way of our asteraceae.

But, whilst these last ones got specialized in always smaller structures for seducing the insects, the proteas aimed to some more cumbersome customers, the birds, with robust landing branches, and huge bracts, visible also from far away, in their preferred dye, the red, as advertisement of an appetizing reserve of nectar.

And the insects? In just one inflorescence of protea only, they have counted even 1.000 of them, but, failing adequate structures, instead of pollinating, they are useful for attracting the birds, which look at them as a sort of “second course”, after the drinks of nectar.

One inflorescence can have even 160 corollas, placed as a spiral on a large receptacle surrounded by bracts, and when these open, they blossom in two days, starting from the outside towards the interior.

The perianths are lacerated by a robust style, the feminine organ of the flower, and so, on one side we find the widest part of the corolla, rolled up, as a holder, and open in the upper side with three anthers, and one the other side, a free fragment, more or less as long as the style, with its own anther.

And, as often it happens in the world of the flowers, to reduce the risk of incests, the receptive part of the style, the stigma, ripes only when the flower has exhausted its pollen charge.

Recently, also the man, who, besides isolating the best forms, follows, as done in the past centuries with the roses, the way of the hybridization, has joined the vast group of the pollinators of the proteas.

Besides of being valid ornaments for terraces and gardens, the proteas resist even 2-3 weeks as cut flowers, and the more spectacular species, cultivated in mass, like the carnations, feed a rich market and are, by now, familiar in the florists’ shops almost all the year.

The selection has worked wonders. The inflorescences of the Protea cynarodes, just to say, reach today even 30 cm of diameter, with red, pink and even white bracts, large and well separated, or small and numerous; and those of the Protea magnifica, can be as candid as the snow, with greenish bracts, or white on the borders, and black at the centre, with blazing red or pink-orange bracts.

From the cross breed of the Protea eximia with the Protea susannae, they explain to me at the Fyrbos Research Unit. ARC of Elesenburg, South Africa, was born the “Cardinal”, with bracts of a nice, intense red, with glazed reflections, more conspicuous than the eximia, and much more productive as cut flower; whilst from the marriage of a Protea neriifolia with the Protea repens, they have obtained ‘Natalie’, a plant rich of beautiful inflorescences with an exceptional renewal to the cut.

From the cross breed of the Protea compacta with the Protea magnifica, they have gotten two hybrids, now frequent in the shops: the ‘Andrea‘, with the flowers ruffled at the centre and the ‘Pink Velvet’, more tidy, with velvety reflections and 40 cm stems, perfect for the cut flowers industry; whilst for another cross breed with the repens, was born a sort of “Christmas star”, not yet named.

They blossom almost all the year, depending on the species, the cultivation, and the climate, but, unluckily, they are not long-living plants, and very seldom they can be more than 10-15 years old.

As we have already told for the Leucospermum, unless if we live in the Elba Island, in Sicily, or in Sardinia, where the soils are mostly acid and the lowest minimum temperatures do not go down under 10 °C for long time, also the cultivation of the proteas in open land is not very easy.

If, for instance, we dig a hole in the calcareous and clayey soil of Liguria, and we fill it with acid, siliceous and sandy land, convinced of having created a suitable environment, well, it’s not sure that it works.

In spite of every good intention, in fact, the clay around, forms a sort of “waterproof bowl’, and the roots will be an easy prey of rottenness, not to talk about the unavoidable infiltrations from the sides, which annul, little by little, the acidity of the soil.

To avoid risks, apart few varieties which are more or less tolerant to the limestone, it is therefore better to keep them in large pots. In the open air, in full sun during the nice season, and in a luminous veranda in winter, when in not very suitable locations, such as Milan, with cold and humid air.

The perfect drainage is to be done with a classical stratum of fragments on the bottom, followed by a stratum of pozzolana (a volcanic rock, spongy and incoherent, which gets its name from the layers of Pozzuoli, near Naples), and by a light, sandy and acid compound, rich, for instance, of decomposed leaves of chestnut, conifers needles, and quartz, but very poor of manures, as the proteas do not absolutely tolerate the excesses of phosphorus.

Between the various watering, the soil must dry up almost completely. Usually, two interventions per week are sufficient, and even less, when the plant rests.

The reproduction by seed of the proteas in our climates is, luckily, rather easy, with a germination of the 70-80% of the cases, as explains to me, Dr. Pierre Allemand of INRA, the Institut National des Recherches Agronomiques of Sophia Antipolis, which carries on, in our climates, in collaboration with South African colleagues, an important programme of research on the Proteaceae as cut flowers.

The best period goes from December to March, and the sowing can take place in the usual tureens, in a compound of siliceous sand and horticultural peat in equal parts. It is sufficient to cover slightly the seeds, with their showy “beards”, to maintain always the soil humid, and to wait for three weeks.

The best temperature is that of a cold greenhouse in Riviera: 10-12 °C by night, and 18-20°C by day, but also a not heated veranda is suitable.

As soon as germinated, the small plants are to be isolated in small containers, and after one month and a half, they can be placed in the final pot.

The rapid growing species, like the Protea eximia, are already in flower in less than two years, whilst for the Protea cynaroides, at least three years are necessary, and for some varieties of Protea magnifica, the years will become even sox or seven.

The multiplication by cutting, indispensable in the industry for maintaining the characteristics of the plant, is, on the contrary, rather difficult.

It is necessary a mixture of peat and of expanded polystyrene, well drained, always humid, but not too much, because the fungi lie in ambush, and very often the plants wither before rooting.

The best month is September-October, and it is good practice to take off some small branches of 15-20 cm, respecting the “growth units” of the plant.

Every year, in fact, the proteas produce branches with leaves, small at the beginning, then bigger, and then, again decreasing till they become scales at the time of the vegetative stop. And, chosen preferably the faded ones, we have to effect the cut in the point of separation between the two cycles, treating then the base of the branch, well cleaned by the leaves, with a rooting hormone like the “Rooton”.

The small plants must be kept in the shade till the revival, in a soil preferably warmed up to 24°-25°C. But the chances of taking root are in any case disheartening, the 20-30% at the best.