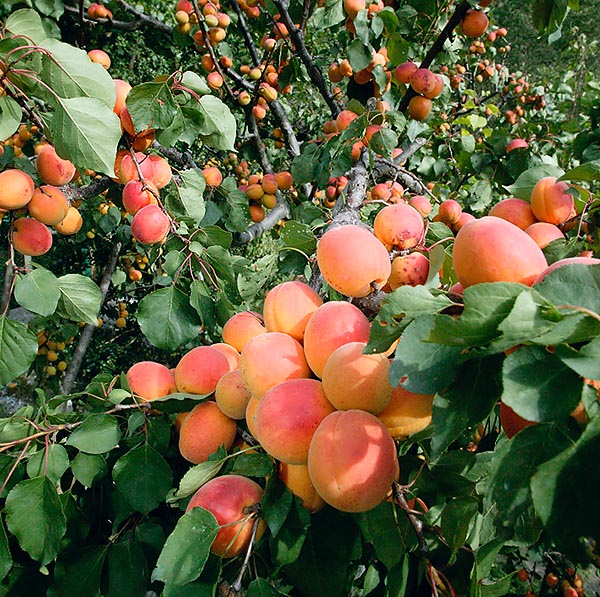 The Prunus armeniaca, commonly known as Apricot tree, belongs to the botanic family of the Rosaceae.

The primitive peoples who started the cultivation of plants and the breeding of animals found difficult to get the difference between the fruit of the apricot tree and that of its close relative, the quince.

The difficulty stood in the fact that both belong to the same family and to same relevant subfamily: Prunoideae, which produce drupes with a stone, or endocarp, inside, and this is lignified on its outer part in order to protect with efficacy the seed contained inside.

When the suitable conditions take place, the lignified part degrades allowing the germination and the development of an offset; in this way the primitive men were able to carry this plant from one to another side of the known world. These were old times and getting aliments meant to realize a compilation of observation and of oral transmission in order to get away from the nomadic life which was giving an enormous difficulty for surviving.

Possibly, in several zones of northern China, were soon located trees which produced fruits similar to the present apricots and their diffusion soon began to reach other zones. Several nuclei with a different genetic material are known in the East and in Europe, with different characteristics of shapes of fruits and of their peculiarities as edible fruit.

Even if the calculations of the antiquity of the apricot-tree date it in 4000 years, those concerning its development with utilization of techniques for the cultivation are only from 700 to 400 years old. Space-time during which the ancient farmers were noticing the behaviour of the tree and the reaction to stimuli they got; in the end, the uprising of the agronomy till our days. A similar thing happened with the more outstanding fruits which appeared in a spontaneous way or as consequences of the combinations the genetics was producing in an unknown manner.

In the scientific name appears the species armeniaca, name which reminds us the region of Armenia, from where it was thought, originally, that this plant was found as spontaneous.

The time and the genetic, botanic and anthropologic studies effected have proved the error of this appreciation, despite the fact that this corner of the world may produce quite excellent fruits of the apricot-tree. 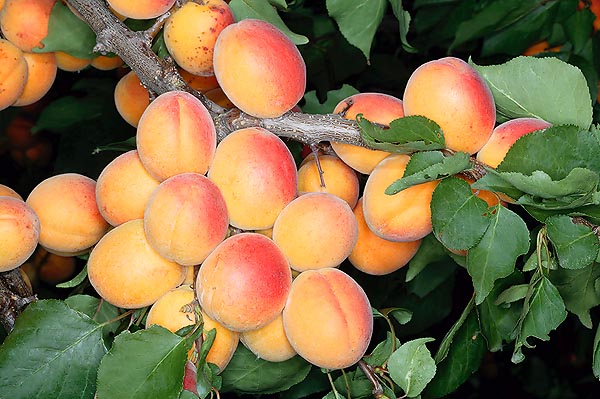 The apricots are rich in vitamins and minerals like iron, potassium and magnesium © Giuseppe Mazza

The causes which encouraged its expansion from one zone to another possibly were the shape of the fruits, the organoleptic characteristics of the same which started to improve or the facility of its propagation.

With the transfers effected it was found that, when in temperate climates, the plant had a better development and that exceeding the altitude of 400 metres was an important obstacle for getting better outputs, in the same way it was found that light soils offered a better response, if compared to the clayey and humid ones. Quite soon, it was considered as a dry tree and that it was better to avoid excessively cold climates in order to obtain better fruits and consequently better considered.

Then they started to evaluate organoleptic qualities, such as the contents in sugars and adequate acidity, together with the evaluations of form, shape, outer and inner coloration and other characteristics which were coming.

And also limitations like the poor margin of conservation and the secondary applications as drying it, provided the stone was eliminated, and utilization of apricots, realization of syrups, juices and other nowadays uses as combination with dairy products and their derivatives.

The dieticians emphasize that this fruit unites properties due to its contents in fibre and carotenes, being the juice an important component for the prevention of cardiovascular damages, including the quantities of vitamins, and mineral elements like iron, potassium and magnesium. Outstanding varieties are those known as Bulida, Canino, Tadeo, Moniqui, etc.

The tree does not exceed the height of 6 metres and develops a roundish top and an erect station. The disease produced by organisms of viral nature cause limitations to the expansion of the cultivation. The Sharka (Plum pox virus) and the CLSV (Chlorotic Leaf Spot Virus) stand between other important factors which can disfigure the fruit of the apricot-tree.