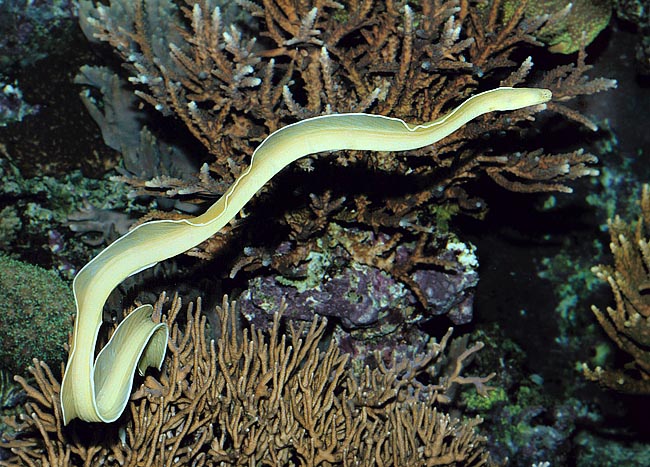 Pseudechidna brummeri swims elegantly, like a ribbon, and often disappears into the sand © Giuseppe Mazza

The Brummer’s moray or White ribbon eel (Pseudechidna brummeri Bleeker, 1858) belongs to the class of Actinopterygii, the ray-finned fishes, to the order of Anguilliformes and to the family of Muraenidae.

The name of the genus Pseudechidna comes from the Greek “pseyeds” = false and “echidna” = viper, due to the viperlike look.

The name of the species brummeri = of Brummer, honours the memory of the Lieutenant Medical Colonel Brummer, superior of the Dr. Pieter Bleeker, who worked as physician in the Dutch army. During the 18 years he spent in Indonesia, he collected about 12.000 specimens, apart this subject gotten from the friend Brummer, 511 new genera and 1925 marine species.

It is present in the tropical waters of the Indo-Pacific. As indication, we find it in Somalia, at the Maldives, in Indonesia, New Guinea, at the Palau Islands, the Philippines, at the island of Guam, in Taiwan and, in the southern part of Japan, at the Ryukyu Islands. Eastwards, it reaches the Fiji and Samoa islands.

It lives in shallow waters, up to 9 m of depth, often under a madrepore, more or less buried in the sand of which it imitates the colour.

Totally harmless to humans, it rarely exceeds the metre, usually measuring 50-80 cm. The dorsal, caudal and anal fins are merged to form a high cutaneous crest on the back, which then continues, lower, along the tail up to the anus. As customary among the morays, the pectoral fins and the ventral one are absent. The body, decidedly serpentiform, is very flat, without scales and covered by slippery mucus which protects it from the ectoparasites, allows entering unbelievable holes and to not getting wounded when it disappears into the madreporic sand among the residuals of the reef. The branchial openings are reduced to simple holes. 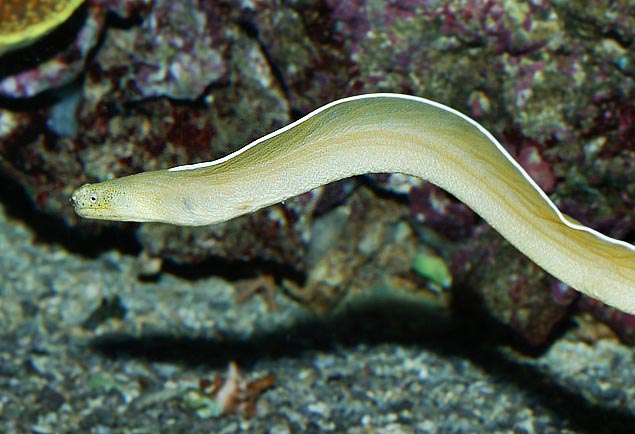 The eyesight is modest, compensated by a perfect sense of smell, thanks to two anterior nostrils and two posterior ones.

The first, at the extremity of the snout, point down, and the second, just visible, stand at the level of the eye. This is a sort of all-round radar for hunting also during the night. The snout is triangular.

The mouth, big if compared to the head, shows in the teeth a small sexual dimorphism. In the males, it is symmetrical on both jaws with robust hooked teeth, whilst the females have analogous teeth only in the fore part of upper jaw. There are then two rows of smaller elements and numerous teeth on the vomer, contrary to the males who count only a couple of them. The lower jaw has much shorter teeth than the male, but in the fore part it shows a second row. The background is whitish, more or less dark depending on the age and the locations, with characteristics small black dots on the head.

The Brummer’s moray lives solitary nourishing of small crustaceans and molluscs, like the nudibranchs, which it manly hunts during the night when it gets out from the den, driven by huger. It often frequents the rock pools, where the trapped animals have no way out.

When in aquarium, it accepts the commercial krill, fragments of shrimps and clams. The water must be flawless and it can live long if it does not get out from the holes of the cover.

The eggs are pelagic and the larvae, called leptocephal, transparent, shaped like a leaf of willow, have a very small head. This is acharacter of primitivity in the evolution of the fishes typical of the Anguilliformes.  The growth is slow and the juveniles resemble to the adults. The vulnerability index of the species is moderate, marking 57 on a scale of 100.