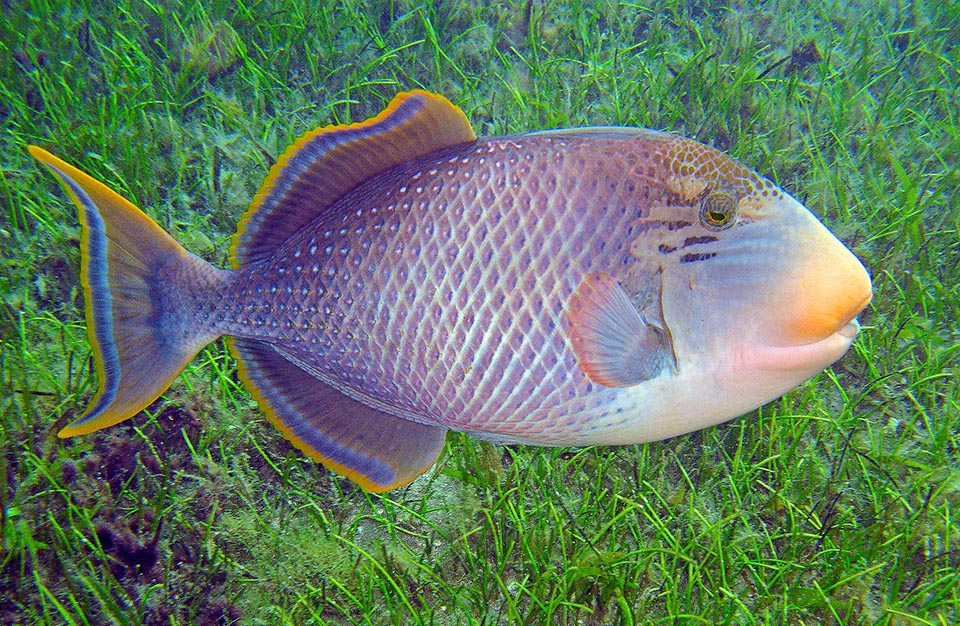 The Pseudobalistes flaviamarginatus is frequent in tropical Indo-Pacific. The adults’ fins have a characteristic yellow-orange border © Gianemilio Rusconi

The name of the species “flavimarginatus” means in Latin “with yellow margin”, with reference to the colour of the fish.

Juvenile with the ‘trigger’ out. Easy to recognize due to the clear hue in all growth phases © Giuseppe Mazza

It is present in the tropical waters of the Indo-Pacific. We find it, as an indication, along the African coast, from South Africa to the Red Sea, the Seychelles, Mauritius, Réunion and Maldives, in India, Australia, Indonesia, New Guinea, Micronesia, Philippines, Taiwan and southern Japan. Eastwards, it has colonized Samoa and the Tuamotu Islands archipelago. Southwards, it reaches Tonga Island.

It lives in the madreporic formations up to 50 m of depth, but is often found also in shallow waters, in the estuaries and in muddy lagoons.

It can be 60 cm long. The body is flat, ovoid, protected, as we would expect from the triggerfishes, by a coating of bony scales.

The first dorsal fin is an erectile trigger formed by three spiny rays which the fish can block, for defence, in erect position. Like all triggerfishes, it keeps armed also after the death, because the first spine, long and sharp, is embedded at the base of the second and it is necessary a voluntary movement of the third one for folding it in the appropriate lodging on the

A formidable deterrent for the jaws of the predators, which may get injured while swallowing the fish, and a way for finding safe shelters. It is sufficient, in fact, to choose as den a cavity with a narrow door, where it can enter only with lowered fin. Once inside, the fish opens the rigger and can stay safe and calm, sure of not being carried out by the currents while sleeping or resting. 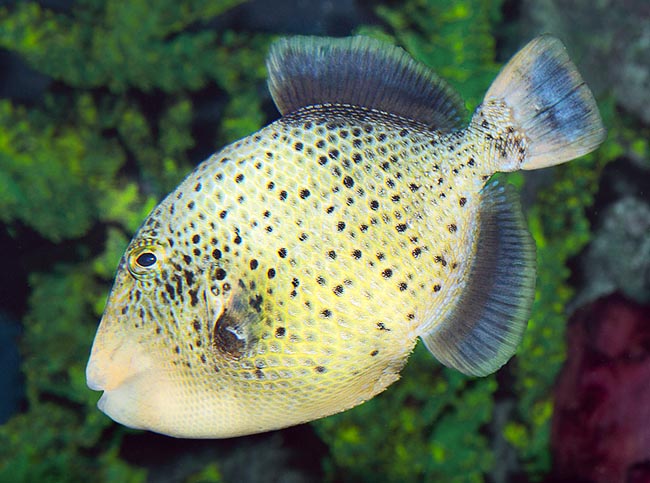 The cheeks have no scales and the mouth, small but robust, shows solid incisors for breaking madrepores and shells. In the whole, the livery is unmistakably clear. The juveniles have yellow belly with black or blue spotting and white back with black bands. Then they get greenish with black small spots and finally the adults exhibit, as the Latin name of the species recites, a showy yellow-orange margin on the edge of the fins whilst the spotting disappears and the scales grow up showing a regular relief.

The Yellowmargin triggerfish nourishes of benthic invertebrates such as sea urchins, crustaceans, molluscs, tubeworms and polyps but also of sea weeds.

As usual among the triggerfishes, it digs, with water jets fro the mouth, a nest in the sand and after the fecundation the female keeps the watch to the eggs until the hatching occurs attacking the intruders ferociously. The Pseudobalistes flavimarginatus is often fished and consumes fresh or dried by the local populations, but there are reports of cases of ciguatera, a serious intoxication caused mainly by its herbivorous alimentation, which may include poisonous sea weeds. The members of the species double in 15 months and the vulnerability index is presently low, just 29 on a scale of 100.