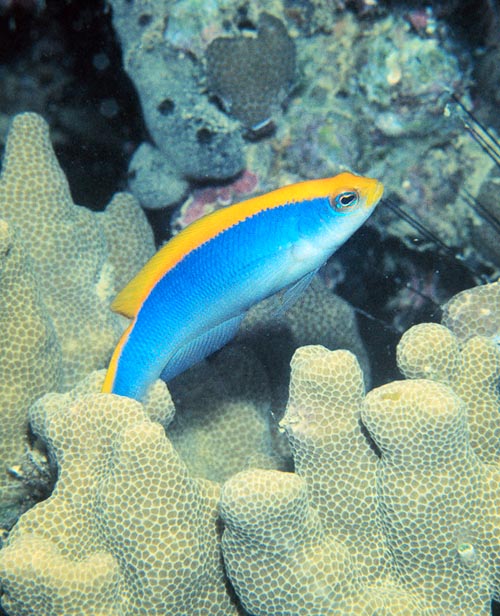 The Sunrise dottyback (Pseudochromis flavivertex Rüppell, 1835) belongs to the class of Actinopterygii, the ray-finned fishes, to the order of Perciformes and to the family of Pseudochromidae which counts 16 genera and about one hundred species diffused in the tropical waters of the Indian and Pacific oceans.

The name of the genus comes from the Greek “pseydes” = false, similar in appearance, and from “chromis”, the name of the fish cited by Aristotle and given in 1758 by Linnaeus to the well known Damselfish (Chromis chromis) of the Mediterranean, which belongs, however, to the bigger family of the Pomacentrids, rich of 29 genera and almost 400 species.

The name “flavivertex” comes from the Latin “flavus” = yellow and “vertex” = top, summit, with reference to the colour of the back.

Consequently, it is a fish with yellow back reminding the damselfish, whilst the Germans, with their common name of “Gelbblauer Zwergbarsch”, pragmatically prefer to talk of a yellow and blue perch.

The Pseudochromis flavivertex is endemic to the Red Sea and the Gulf of Aden.

It lives in shallow waters starting from the depth of 2 m, mainly around the 15 m, at times reaching even the 30 m. It loves the sandy bottoms, with not too close madrepores, where it lives solitary furtively passing from a formation to another one. 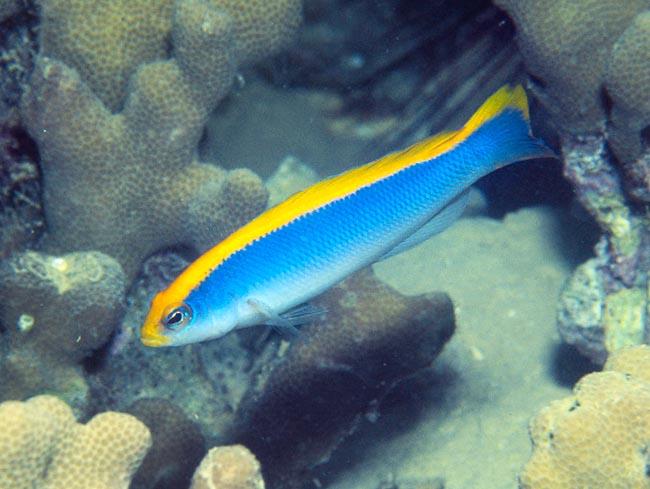 Both males and females control a small territory, about one metre wide, with single dens.

They nourish of small worms and, mainly, of benthic crustaceans they find among the corals.

For the reproduction, the male digs or finds a cavity among the rocks or the coralline crevices and attracts there the female who loses the head so much to place upside down, belly up. The male covers it, belly against belly, and patently waits for the moment of the fecundation.

Within two or three hours, in spite of the small size, the female is capable to spawn a 2-3 cm mass with even 500 eggs!

Then it would be a hindrance and is violently sent away from the nest. The male keeps the watch and ventilates the eggs for 5-6 days, oxygenating them carefully until the hatching in order to avoid moulds.

The sunrise dottyback is a fish rarely found in captivity, even if farms do exist for the American aquaria market.

In the Red Sea, where it is fished without any scruple for the European shops, they have seen that the populations impoverished by the events, double in less than 15 months and therefore the vulnerability index of the species keeps in any case very low: only 10 on a scale of 100.