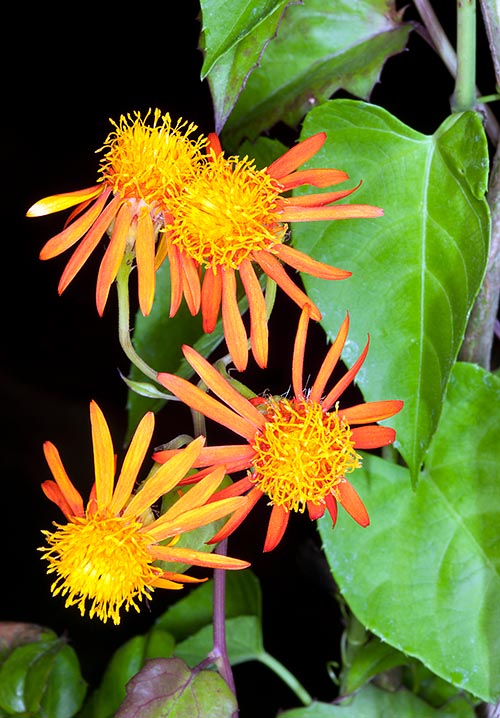 The Pseudogynoxys chenopodioides is a 4-6 m toxic tropical climber with woody stems at the base. May be cultivated as annual in the cold climates © Giuseppe Mazza

The species is native to Belize, Colombia, Costa Rica, El Salvador, Guatemala, Guyana, Honduras, Mexico (Tamaulipas and Veracruz), Nicaragua, Panama, Suriname and Venezuela, where it grows in the semi-deciduous forests up to about 2000 m of altitude.

The Pseudogynoxys chenopodioides (Kunth) Cabrera (1952) is an evergreen perennial climber with voluble stems woody at the base, up to 4-6 m long, with leaves, on 1-3 cm long petioles, alternate, simple, ovate-lanceolate with pointed apex and toothed margins, serrate or entire, at times cordate at the base, thick, 3-12 cm long and 1-7 cm broad, of intense glossy green colour.

The flowers, of 2,5-4 cm of diameter on a 3-9 cm long peduncle, solitary or united in panicles in the terminal part of the stems, are the typical capitula of the Asteraceae formed by a crowd of sessile flowers inserted on a roundish base, the receptacle, surrounded by an involucre formed by several linear lanceolate bracts with pointed apex. The flowers of the outer ring, called ray flowers, from 15 to 24, have the corolla linear, tridentate at the apex, 1-2 cm long and 0,6 cm broad, formed by 5 merged petals of intense orange to reddish colour. The flowers of the ray are female and have also the function of attracting the pollinator, like the petals of a single flower. Inside the ring are located the bisexual flowers, called flowers of the disc, about 1 cm long, with tubular corolla having 5 short lobes, of yellow colour turning orange and red with the time. The fruits are achenes (or more correctly, cypselae) almost cylindrical, hispid, 0,4 cm long, surmounted by the pappus, the modified calyx of the flower formed by white bristles, about 0,8 cm long, which has the function of favouring their dispersion by means of the wind. It reproduces by seed interred superficially on a sandy loam maintained humid, in luminous location, at the temperature of 20-22 °C, and easily by cutting and offshoot.

Vigorous species and of easy cultivation with spectacular blooming, cultivable in full sun in the tropical, subtropical and marginally in the warm temperate climate zones, where it can resist to temperatures of some degrees less of 0 °C with loss of the aerial part, but growing up quickly again from the roots in spring, useful in these situations a good mulching. It is not particular about the soil, even if poor, slightly acidic to slightly alkaline, maintained humid in the initial stage of growth, then, well rooted, has a good tolerance to the dryness, furthermore has a fairly good resistance to the winds and the saltiness; of remarkable ornamental effect when climbing on railings, fences, pergolas or used as soil cover. It has the drawback of keeping for long time the dried leaves on the plant, which may be attenuated with appropriate pruning, after the blooming, which also contribute to maintain a more compact posture. In the cold climates, thanks to the fast growth, may be treated as annual, sowing in spring with blooming in late summer, or cultivated in pot, in order to be sheltered in particularly luminous ambient, utilizing rich loam with addition of coarse sand or agri-perlite per a 30%, with lowest night values of temperature preferably not less than 10 °C. The watering must be regular and abundant in summer, reduced in winter, but with never allowing the substratum to dry up completely.

All parts of the plant are toxic when ingested; it may cause contact dermatitis in the most sensitive subjects.