The species is native to Haiti where is present, in a reduced number of individuals, on the slopes of a valley of the southern peninsula in the dry thicket, on poor calcareous soils, at low altitudes.

The name of the genus is the combination of the Greek prefix “ψευδο-” (pseudo) and of the genus Phoenix, due to the supposed resemblance between the two genera; the species is honoured to the American botanist and scholar of palms of the XX century R. Bruce Ledin.

The Pseudophoenix lediniana Read (1968) is a solitary species, monoecious, unarmed, with erect stem, that usually does not exceed 10 m of height with a diameter of 20-35 cm, cylindrical with enlarged base or slightly ventricose, of whitish grey colour, waxy in the young plants, on which stand out the annular scars of the junction of the fallen leaves. 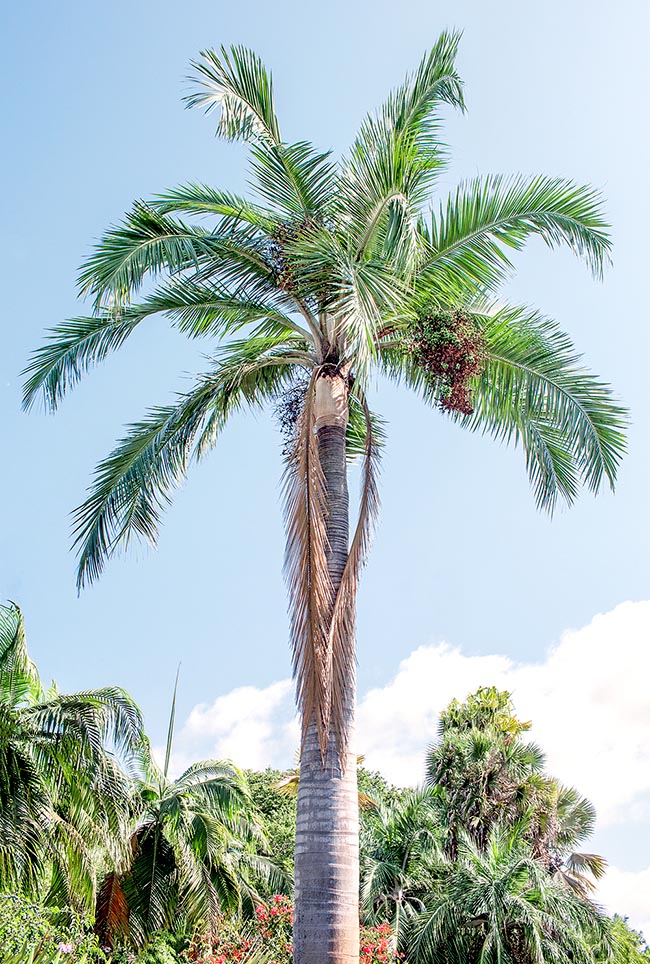 At very high risk of extinction in nature, the Pseudophoenix lediniana is native to the arid slopes of a small valley of Haiti. In spite of its undoubtful ornamental characteristics, the speed of growth and a certain tolerance to short thermal lowerings, it is found only in few botanical gardens and in collections of lovers © Giuseppe Mazza

The leaves, on a 20-25 long robust petiole, are pinnate, up to about 3 m long, with linear-lanceolate leaflets slightly drooping in the adult plants, arranged more or less regularly along the rachis on slightly different planes, 50-60 cm long and 2-2,5 cm broad in the median part, of intense green colour.

The foliar base, of green grey to bluish green colour, waxy, wraps entirely the stem for a length of 40-60 cm.

Inflorescences between the leaves (interfoliar), up to about 1,5 m long, with ramifications of the third order, hermaphroditic flowers singly arranged in spiral on the rachillas, except in the terminal part where are present few male flowers, with trilobate calyx, 3 petals, 6 stamens, trilocular gynaeceoum and short sessile stigmata.

Globose fruits, of 1,5-2,2 cm of diameter, less frequently bi- or triglobose, of reddish colour, waxy, containing 1-3 globose seeds of about 1,2-1,4 cm of diameter.

It reproduces by seed, previously kept in water for 3 days, in sandy loam maintained humid at the temperature of 26-28 °C, with germination times starting from 3-4 months.

Despite the undoubtful ornamental characteristics and the speed of growth, greater than the other Pseudophoenix, is rarely cultivated, present in few botanical gardens and collections of lovers of the regions with tropical and subtropical climates, its cultivation might be tried in sheltered position also in the milder warm temperate ones, where temperatures close to 0 °C are short lasting exceptions.

It requires full sun and draining soils, preferably calcareous, resists drought, therefore can be employed on desert type gardens, together with cacti and other xerophytic species, as in nature, but grows more luxuriant and quickly if the water is not missing.

Particular uses by the local populations are not known.

Due to the restricted origin area and the reduced number of individuals, few tens, the species has been inserted in the red list of the IUCN (International Union for the Conservation of Nature and Natural Resources) as “Critically Endangered” (at extremely high risk of extinction in nature in the immediate future).