The Pallas’s glass lizard or Sheltopusik (Pseudopus apodus Pallas, 1775) may be mistaken at first sight with a snake, seen the shape of the body, but is not as such: conversely, it is a saurian and as such can do the autotomy, that is to lose the tail. It has mobile eyelids and present and visible opening of the outer ear.

The vulgar Italian name “Lucertola di vetro” (= glass lizard), instead, refers to the particular modality of loss of the tail, that divides in many small pieces when is autotomized.

Pseudopus apodus is present in the Balkans from Istria along the Balkan-Adriatic coastal belt, up to Greece, Peloponnesus and some adjacent islands, from Macedonia up to S.E. Bulgaria. It is also found in western Anatolia, in Crimea, eastern coast of the Black Sea, Caucasus, west to Caspian Sea, Middle East, northern Iraq, northern Iran and Central Asia. 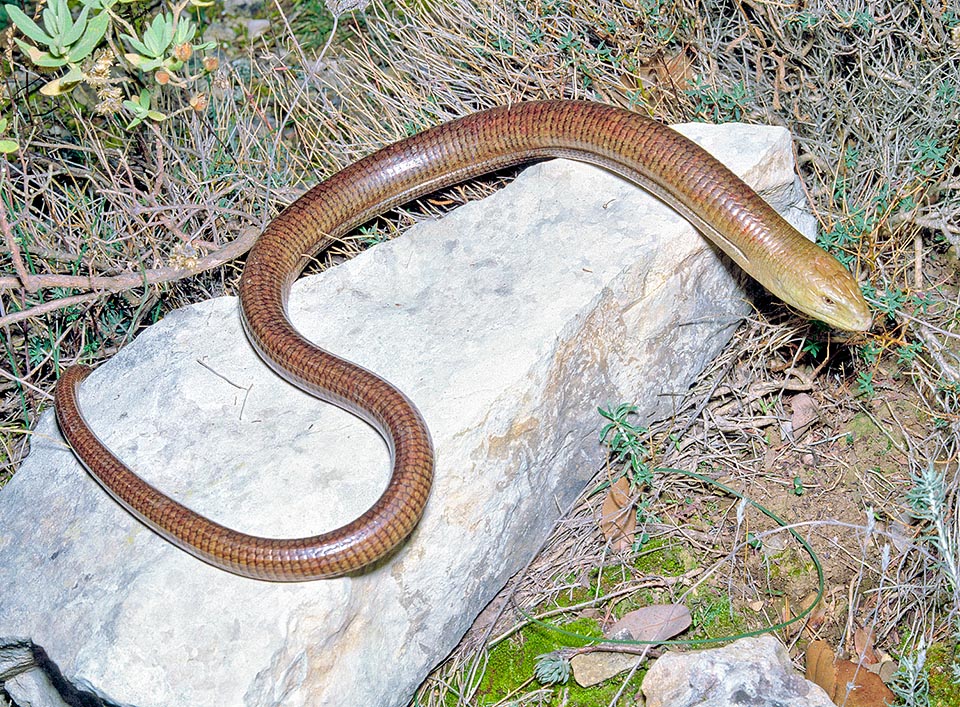 Practically devoid of legs, the Sheltopusik (Pseudopus apodus) can be mistaken at first sight with a stocky 140-150 cm snake © Giuseppe Mazza

The Pallas’s glass lizard is a diurnal saurian, lover of the sun and of the rather dry sites. It can be seen active, however, also at sunset or after the rain.

It prefers habitats rocky and rich of vegetation such as thickets, open woods, heaps of stones, cultivations, low walls, pastures.

In the European part of its range the altitude limit is of about 800 m, but in extra-European zones it reaches even the 2300 m.

Like many other saurians it needs several hideouts where to shelter, in fact it is always attentive and ready against possible predators. If discovered, it gives itself to a hasty escape, but when is seized tries to wriggle strongly; if such tactic does not work emits abundant feces or even loses the tail to confuse the predator. 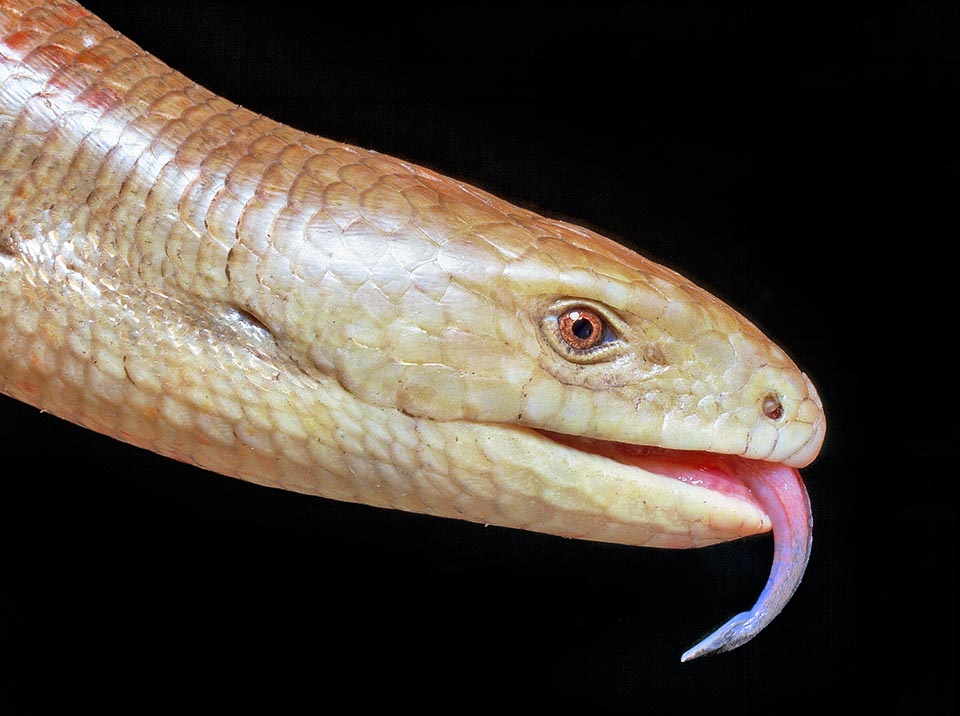 The head however is typically saurian, massive and pointed, endowed of ear openings and mobile eyelids. For better localizing possible preys or the presence of a partner the biforked tongue, very flexible, carries with the saliva, as happens for the snakes and other saurians, the odorous molecules to the Jacobson’s olfactory organ © Mazza

The head is like that of a lizard, almost indistinct from the body, stocky and pointed, endowed of ear openings and mobile eyelids. An important feature is the presence of a long lateral furrow that starts behind the head to reach the tail, that may be long even one and a half times the body.

The animal is covered by many scales, usually smooth and bright; some are slightly keeled and organized in longitudinal lines. Moreover, is present a further reinforcing bone layer that gives to the whole a rigid impression.

In the male and female adults, the upper parts are of a uniform brown-brownish colour, with at times scattered dots reddish or orange; alternatively the back can be uniformly dark brown with paler head.

The young specimens are greyish with dark transversal bands; livery that will slowly disappear with the age. The lower parts are paler in all. 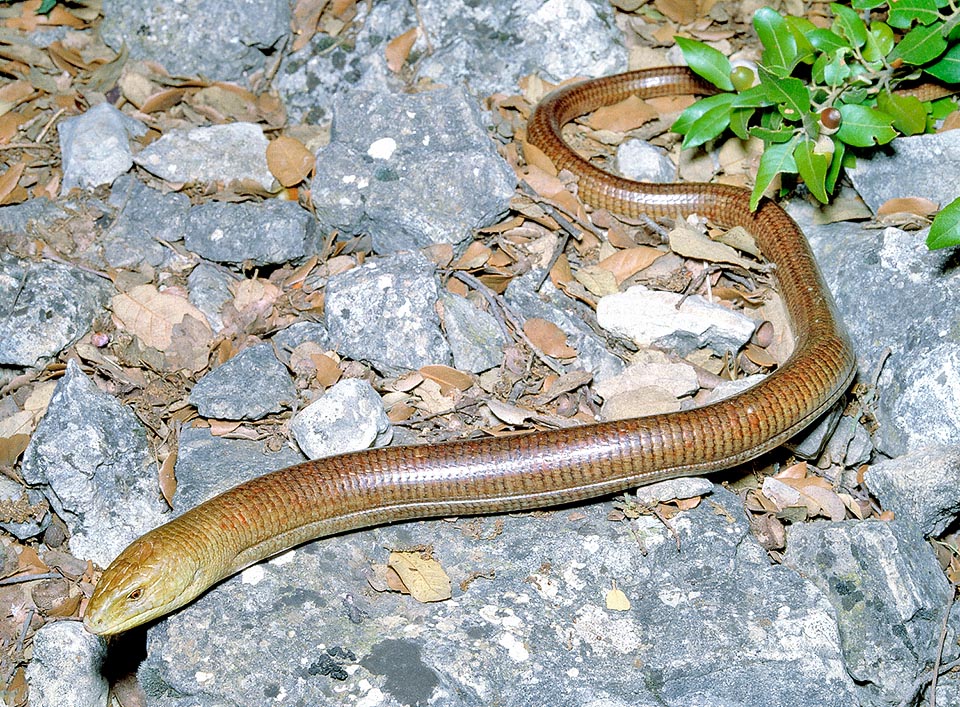 It eats slugs and snails, crushing the shell with the robust jaws, but also worms, big insects, eggs of birds, small reptilians and progeny of small mammals, like, for instance, mice. The eggs, laid under stones or barks, are often surveyed by the mother. They hatch after about 2 months of incubation and the newborns measure 15 cm © G. Mazza

The diet of the Sheltopusik includes slugs and snails, whose shell is reduced to crumbs by the robust jaws, but also worms, big insects, eggs of birds, small reptilians and progeny of small mammals such as, for instance, mice. The period of activity goes from March to October; the mating, that includes fierce struggles between males, takes place in April-May whilst in June-July are laid 6-12 eggs (they are oviparous animals) from which will come to life, after about two months of incubation, the small that measure 10-12 cm. It has been noted a pause, during the daily activity, in the central hours probably to avoid an excessive heat.

Like in other saurians, the schemes of activity, the periods of mating, of deposition, the size of the newborns, the diet, etc. may get slight variations depending on the site, the climate, the availability of food and of the state of health of the individual.