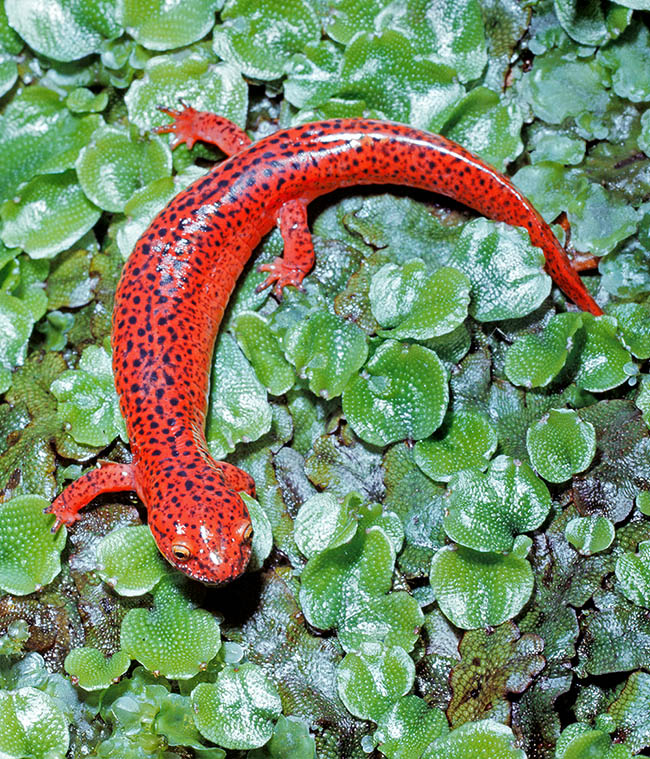 The Red salamander or Red pseudotriton [Pseudotriton ruber (Sonnini de Manoncourt & Latreille, 1801)] is an amphibian belonging to the order of the Caudata, family Plethodontidae, native to eastern USA.

The big family of the Plethodontidae represents about 70% of the urodele amphibians presently described, with a diffusion going from Canada to Brazil and Bolivia in the New World and from south-western Europe up to South Korea.

The name of the genus Pseudotriton comes from the Greek “ψεύδω” (pseúdo), false, and “Τρίτων” (Trítōn), Triton, the son of the god of the sea Poseidon and the nereid Amphitrite, from which originates taxonomically the genus Triturus assigned to the tritons.

It is therefore, zoologically, a “false triton”.

The specific epithet ruber, red in Latin, is an obvious reference to the colour of this salamander.

This genus is endemic to eastern and southern USA, from south of New York to Florida and from west to southern Ohio, Kentucvky, Tennessee and eastern Louisiana.

The Red salamander is a species diffused in eastern USA, with the northernmost boundary in the state of New York, present in the Hudson River, gets to the coast of the Gulf from Louisiana, passing through Alabama, Florida, Georgia, Indiana, Kentucky, Maryland, Mississippi, North Carolina, New Jersey, Pennsylvania, South Carolina, Tennessee, Virginia and West Virginia.

In its vast range presents nowadays 4 subspecies, here listed starting from the northernmost limit in the state of New York.

Pseudotriton ruber ruber, called Northern red salamander, diffused in the south of the state of New York and from Ohio up to North Alabama. This is the most common subspecies and is characterized by an orange red colour with black spots diffused all over the back. 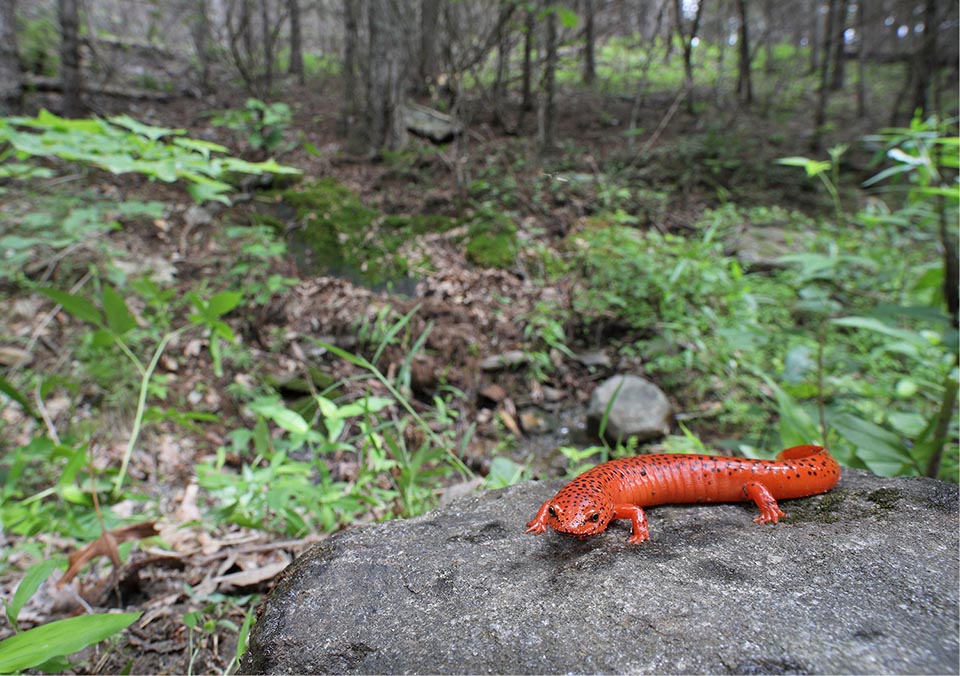 It’s fairly common, up to 1500 m of altitude, in swampy zones or around streams and sources. Occasionally crosses woody areas looking for new sites © Jake Scott

Pseudotriton ruber nitidus, known as Blue Ridge red salamander, present in the southern part of the Blue Ridge Mountains, especially around the 1500 m of altitude. Very similar to the Northern red salamander is recognized by the slightly reduced dimensions and by the absence of the black colouration on the tip of the nose and on the tail.

Pseudotriton ruber schencki, the Red black chin salamander also present in the Blue Ridge Mountains, rarely even over the 1500 m of altitude. It has a widespread black speckling up to the point of the tail with an intense black colouration under the chin. 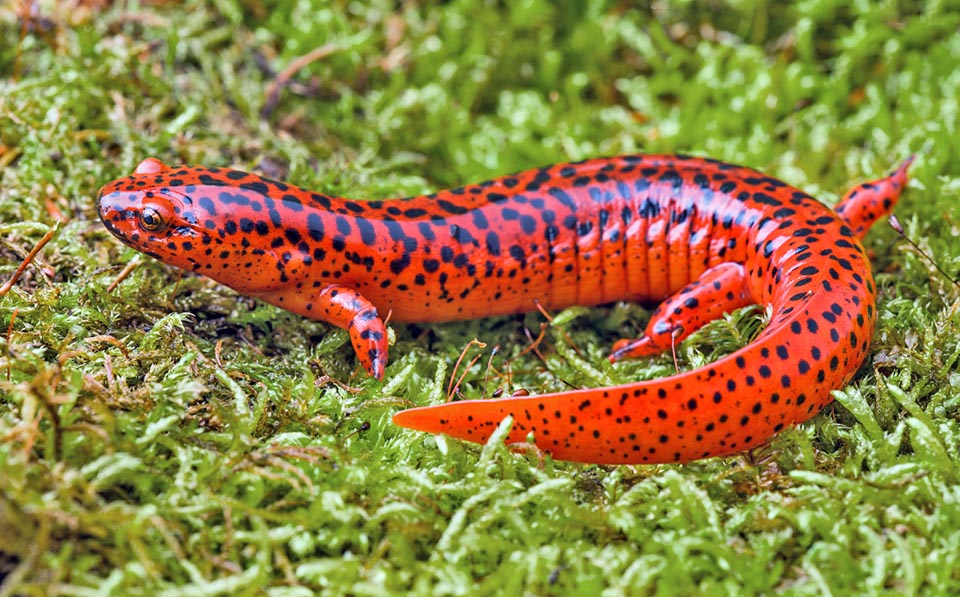 Spends winter and the day warm hours hiding under rocks or trunks. When active, it hunts mostly by night snails, earthworms, spiders, insects and even small amphibians © John P Clare

Pseudotriton ruber vioscai, called Southern red salamander, diffused from the southern part of South Carolina to south-east Louisiana and south-west of Kentucky. This subspecies has violaceous to salmon dorsal colour, with a white spotting on the head. 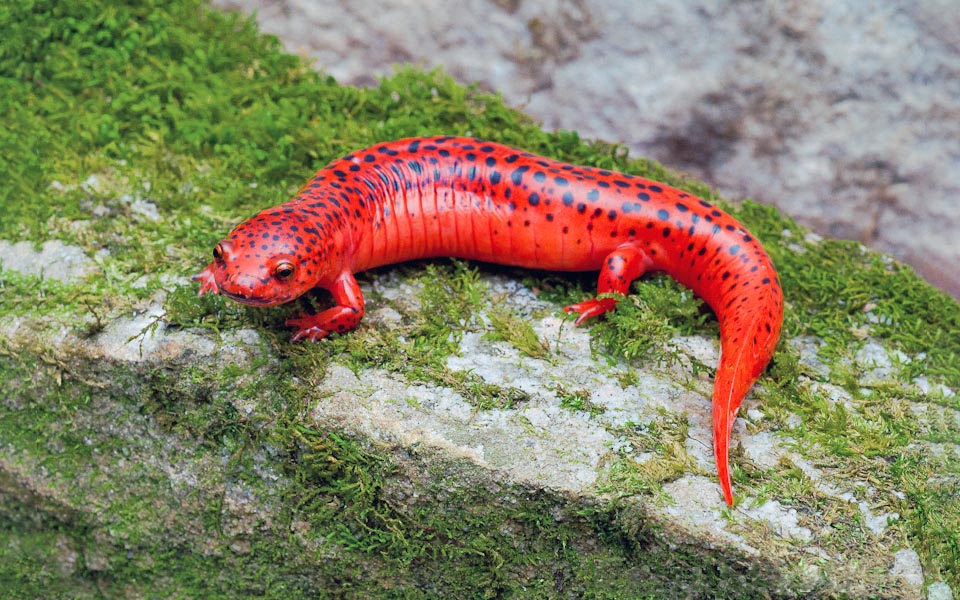 There are 4 subspecies. Pseudotriton ruber nitidus, present in altitude in south Blue Ridge Mountains, is for instance without the small black dots on the snout tip and tail © John P Clare

They may be present in other humid environments such as small coves or mountain swamps. The dispersion from and to these aquatic sites takes place in autumn and in spring, whilst they take shelter in terrestrial environments such as dens along the streams, under the trunks or the rocks during the other periods of the year. Occasionally, adults may also disperse in woody areas looking for new environments.

The red salamanders follow a generalist diet, when adult as well as at the larval stage, nourishing of a wide range of prey, among which mainly invertebrates like snails, earthworms, spiders, water coleoptera and other insects, but also small amphibians, like the red-backed salamanders Plethodon cinereus. 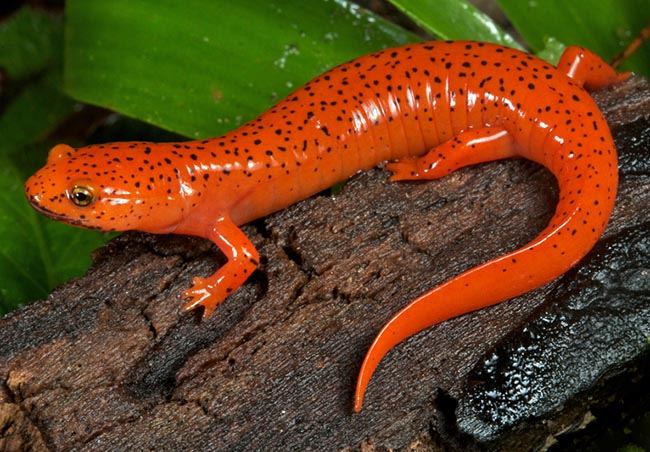 Instead, the main predators of this salamander are birds, snakes, or mammals like raccoons, skunks and shrews.

They are amphibians usually more active during the night, when they go out for nourishment, whilst they spend the day hidden in their shelters.

The species belonging to the family Plethodontidae usually do not present a great inter as well as intra specific morpho-physiological diversity.

Conversely, this diversity is well present at the genetic level, which consequently assumes a bigger diagnostic value.

The morphological traits allowing us to distinguish Pseudotriton ruber from Pseudotriton  montanus are the yellow colour of the iris that in the Mud salamander is brown.

Moreover, the Red salamander has a usually longer snout and less blunt with marked and superimposed dorsal spots, whilst in the other they are more spaced and do not overlap.

Pseudotriton ruber is a species of modest size, with a total length varying from 95 to 180 mm.

Rather robust, in fact presents 16-17 costal grooves, short tail, averagely the 38% of the whole length and the 80% of the length of the snout, as indeed the limbs compared to the body dimensions. 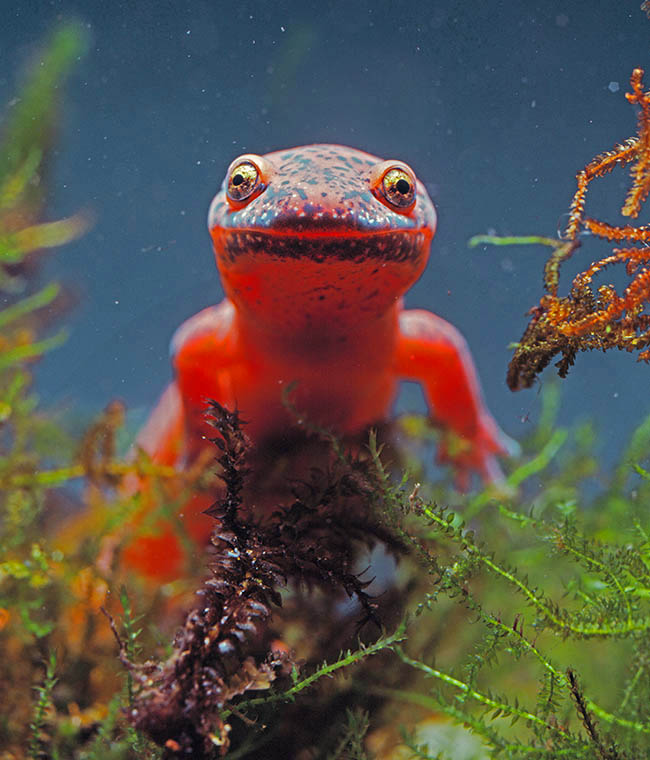 The dorsal colour varies from bright red to orange to violaceous brown, with the presence of irregular black spots. The belly, pink or red, displays black spots.

Getting older the individuals darken with spots that tend to merge.

The young are usually bright crimson red, with always present black dorsal speckling, whilst the spots on the belly may be absent.

After hatch the larvae present a pale brown back, whilst the belly is whitish.

While growing their back becomes more and more streaked, and the closer they get to metamorphosis, the more they tend to red.

Pseudotriton ruber is an oviparous species. The reproduction happens every year and varies in the range.

In these amphibians we note a particular courting ritual.

The male gets close to the female and rubs its snout on that of the potential partner.

Then sways the tail until the female gets on top of it for a characteristic “horse riding” lasting a couple of minutes.

At the end, the male releases on the soil the spermatophore containing the sperm, immediately collected by the female who introduces it in its cloaca. The females of this species can conserve the sperm for a long period and consequently not always the eggs are laid at once after mating. So, they can wait for the most suitable moment.

It has been observed that during one night the male can produce two spermatophores.

The deposition of the eggs, usually 29-130 eggs with an average of 80, occurs in autumn or in early winter. About 4-6 mm wide, they are glued under rocks or submerged trunks in streams, swamps or sources. 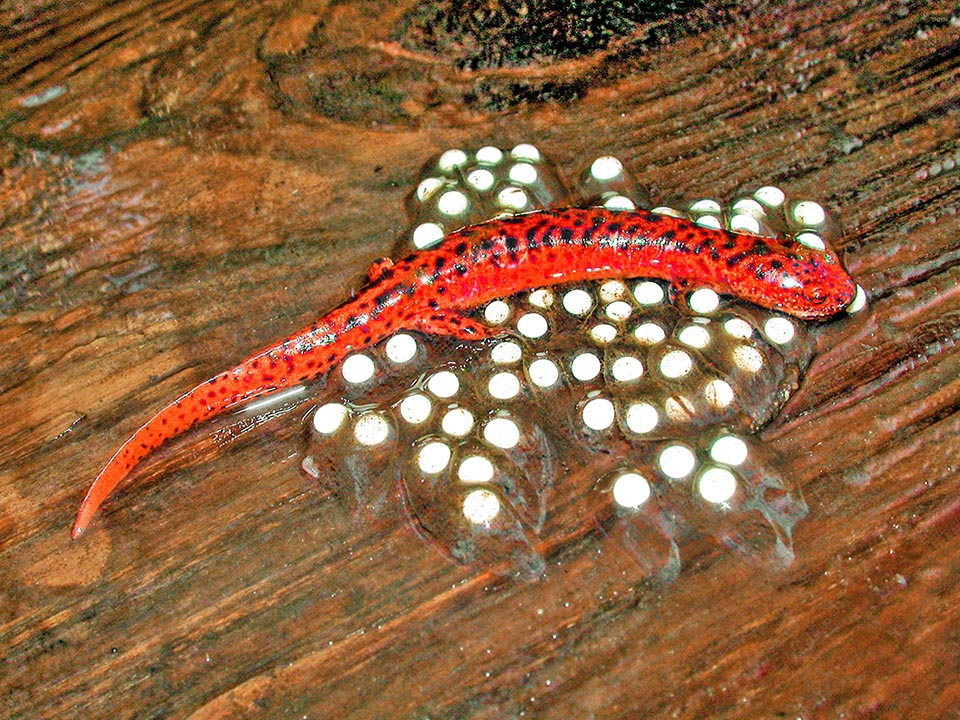 In autumn or in early winter, the female lays averagely 80 eggs, with a maximum of 130, guarding them for 2-3 months until they hatch © J.D. Willson

The females guard the eggs for 2-3 months until they hatch.

The larval period is rather long. It can vary between 1,5 and 3,5 years, with the metamorphosis that mostly happens between spring and autumn of the third year. Then follows a juvenile terrestrial stage lasting about one year in the males and two in the females.

The maturation to the adult stage happens in the males when about four years old, when about 50-60 mm, whilst in the females the same occurs around the five years, once reaching the size of 55 to 70 mm. 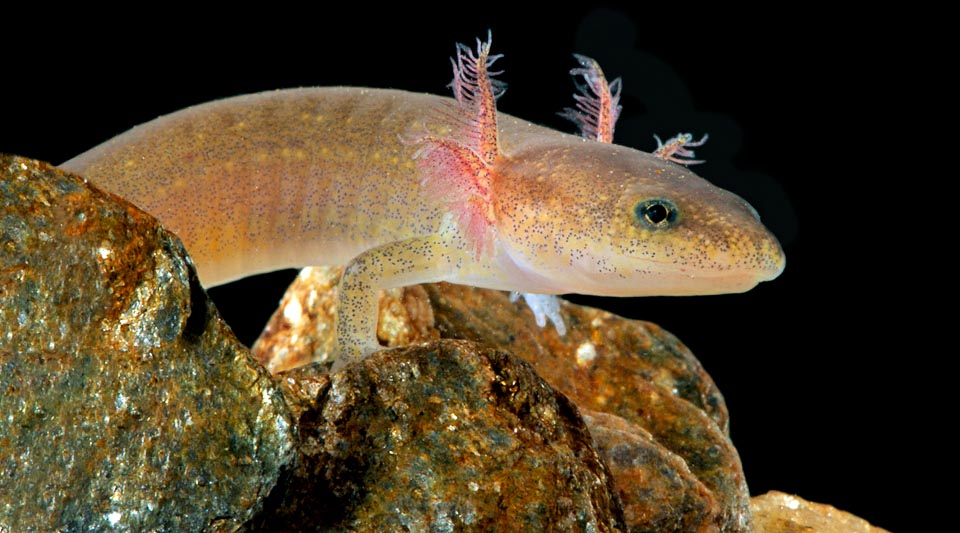 Young larva with its showy gills. The belly is whitish and the back, typically pale brown, then becomes streaked or mottled while growing © Todd Pierson

These salamanders implement particular anti-predatory mechanisms. When threatened, they tend to raise the hind legs and the tail, producing an undulatory movement with the tail and placing the head under it.

Another behaviour concerning always instead the reproductive area is the courting of some males towards specimens of the same sex.

This behaviour would lead to the release of a spermatophore by the rival male, giving the “suitor” a greater chance of reproducing successfully. 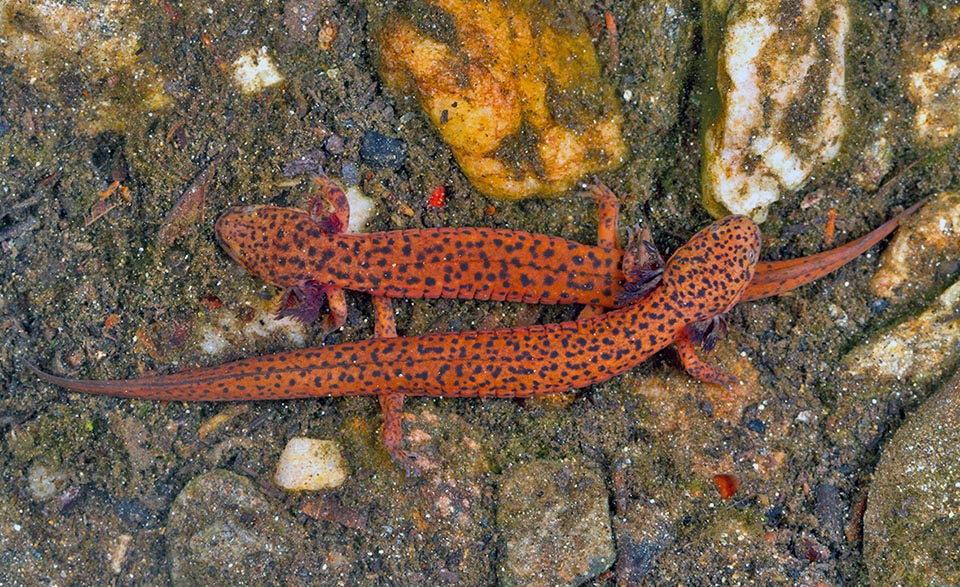 The larval period is quite long. It may vary between 1,5 and 3,5 years, with metamorphosis mostly occurring between spring and summer of the third year © Todd Pierson

The red salamander is a fairly common species, especially the northern red salamander, which turns out to be the most common among its subspecies. This species is assigned to the IUCN category LC (Least Concern, least worry).

Pseudotriton ruber was last modified: May 9th, 2022 by Giuseppe Mazza