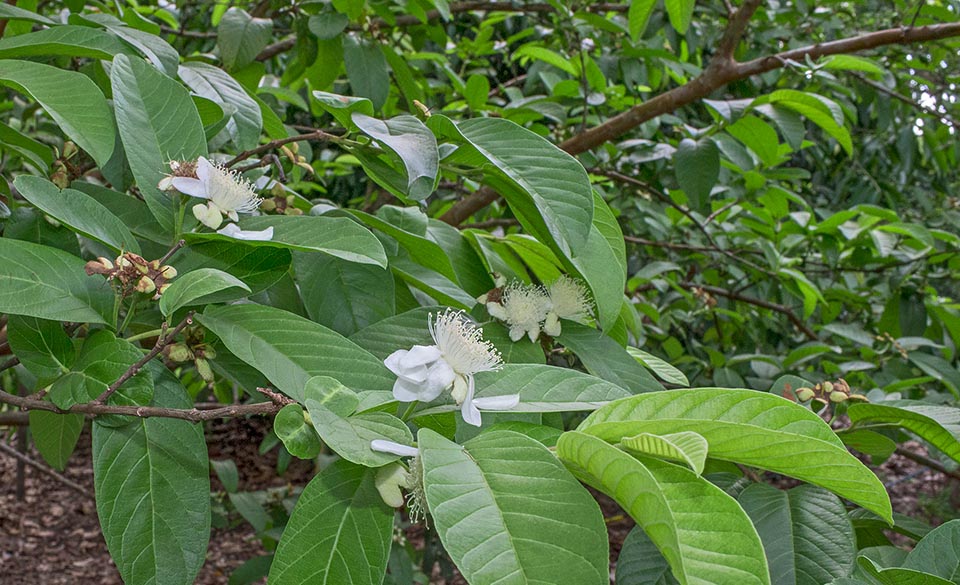 The Psidium guajava L. (1753) is a shrub or small evergreen tree very ramified, up to 8-10 m tall, with pale brown to reddish brown bark, smooth, that tends to flake off in thin strips; the young branches are greenish, pubescent and with almost quadrangular section. The leaves, on an about 0,5 cm long petiole, are simple, opposite, oblong-elliptic with obtuse or acute apex, entire margin and marked pinnate veins, 6-14 cm long and 3-6 cm broad, coriaceous, pale green and slightly wrinkled above, pubescent below.

Axillar flowers, on a 2-4 cm long pubescent peduncle, hermaphroditic, solitary or in groups of 2-3, with calyx having 4-6 unequal lobes, 1-1,5 cm long, retroflexed, of green colour and pubescent, persistent in fruit, 4-5 obovate petals with retroflexed apex, white, 1-1,8 cm long, and several white stamens with white anthers, 1-2 cm long. The fruit is a globose or pyriform berry, of 4-8 cm of diameter, green to yellow, with white, yellow or reddish pulp where are immersed numerous hard seeds almost pyriform, 3-4 mm long, of yellowish colour; varieties with few seeds or entirely without them have been selected. 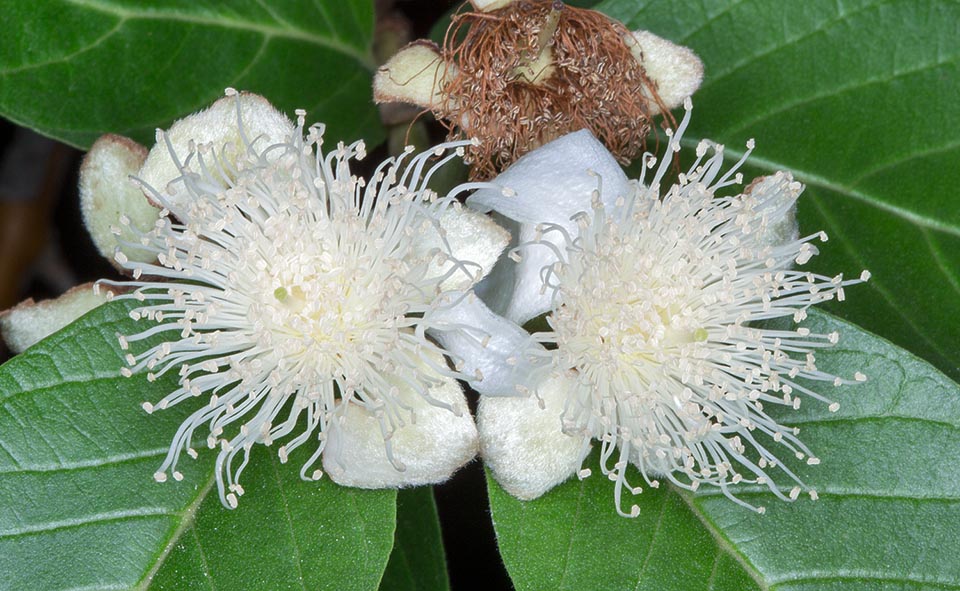 The axillar hermaphroditic flowers, solitary or groups of 2-3, follow the typical scheme of the Myrtaceae with a pyrotechnic crowd of stamens © Giuseppe Mazza

The varieties with the best characteristics of the fruits are propagated by air layering, cutting, grafting and micropropagation, seen that the seed plants do not usually present characteristics similar to those of the mother plant. The highest percentage of rooting in the case of the cuttings is obtained with the semi-woody and herbaceous ones, with 3-4 leaves, and application of rooting hormones, the plants obtained in this way fructify starting from 2 years. Of course, it can reproduce also by seed, previously kept in water at ambient temperature for some days or in boiling water for 4-5 minutes, to dent the hard surface layer, in draining loam maintained humid at the temperature of 25-28 °C, with germination times of 1-3 months or more, first blooming after 2-3 years and full fructification starting from 5 years, in the best conditions of cultivation. Amply cultivated species, in its numerous varieties, in the tropical, subtropical and marginally temperate-warm climate countries, due to the penetrating aroma and pleasant taste of its fruits, sweet to sour, depending on the variety, and for the adaptability to different ambient conditions, often naturalizing, to become in some cases infesting, due to the dispersion of the seed done by various mammals and of the birds. It stands high temperatures and, well rooted, dry periods, therefore can be also cultivated in humid climates as well as in the dry ones, conversely, it is rather sensitive to the low temperatures, values around -1 °C can defoliate the plant, but usually it starts to vegetate again in spring, young plants may succumb already around the -2 °C and adult plants at values less than -4/-5 °C; moreover, it has a fairly good resistance to the saltness, therefore can be employed close to the coasts. 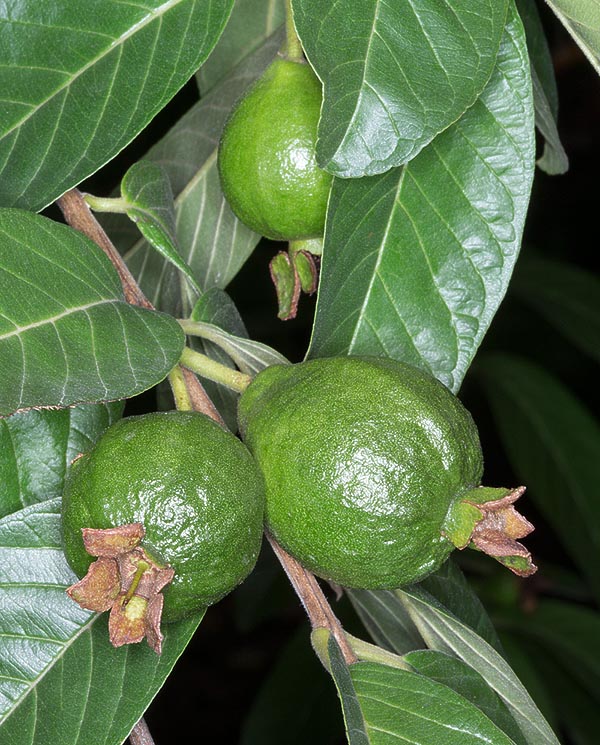 The fruits of various colours, green to yellow, are globose or pyriform berries of 4-8 cm of diameter. Rich in vitamins, minerals, fibres and antioxidant, have a penetrant aroma and good taste, more or less sour. Seedless varieties have been selected. Roots, bark, leaves and fruits have medicinal virtues © G. Mazza

It requires full sun, but in the warmest climates where it is preferable a slight shade, and is not particular concerning the soil, even poor, acidic to alkaline, but grows best in the draining ones, deep, rich of organic substance or regularly fertilized; it fructifies almost continuously in the most favourable climates. It is easily subject to attacks of parasites, in particular aphids, and the production can be seriously damaged by the “fruit flies”, such as the Ceratitis capitata Wiedemann, 1824.

Among the tropical fruit trees is probably the most suitable species to be cultivated in pot, even of relatively contained dimensions, to be sheltered in protected ambient where the climate does not allow the permanence in open air during the coldest months. The premise must be as luminous as possible and the lowest temperatures over the 16 °C, the loam draining and rich of organic substance and regular waterings, but allowing to partially dry up before watering again, finally, with appropriate prunings, it is easy to maintain a contained and compact posture.

The fruits, consumed fresh or variously utilized for juices, jellies, preserves, ice creams, etc., present a high contents of vitamin C (up to more than 400 mg per 100 g of fruit in some varieties), A and B, minerals, fibres and antioxidants such as carotenoids and phenols.

The wood, hard and moderately resistant, is utilized for small objecst, poles and carpentry in general, furthermore it is excellent as fuel and for the production of charcoal.

Roots, bark, leaves and fruits are utilized since remote times in the traditional medicine of the local populations, in particular in the cases of diarrhea and dysentery and in the skin ailments.

Finally, are not to be neglected its ornamental characteristics due to its luxuriant foliage and the white blooming.