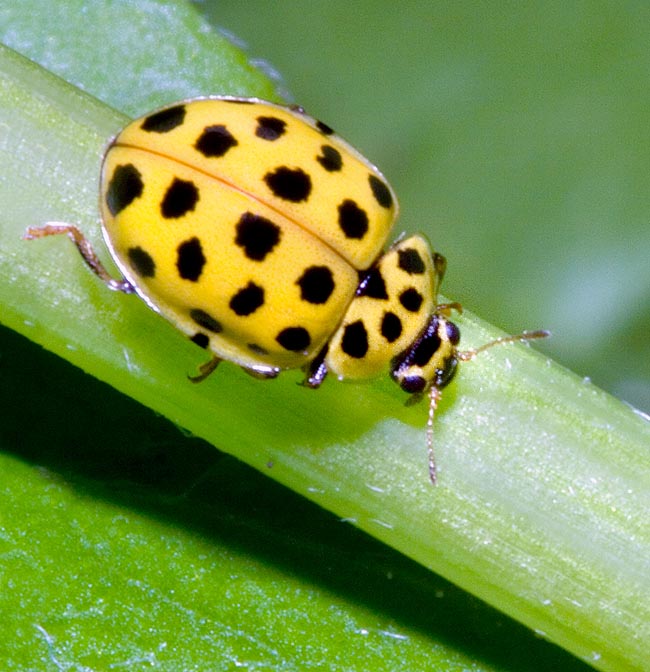 The 22-spot ladybird (Psyllobora vigintiduopunctata) is easy ro recognize due its 22 black spots on yellow background. The pattern of the two elytra may change but it seems that the colour variations are very rare © Giuseppe Mazza

The 22-spot ladybird is known by the specialists under the name Psyllobora vigintiduopunctata Linnaeus, 1758.

The Swedish naturalist Carl von Linné has been the first to describe this species, placing it in the genus Coccinella together with 36 species, among which stand the well known Seven-spot ladybird and the Two-spot ladybird.

All these beetles had in common some anatomical features easy to observe, such as the antennae and the clavate feelers, as well as the hemispherical body.

Seven words in Latin have been sufficient to classify its new species: «Ladybird with yellow body: 22 black spots». It seemed that all knew it in Europe.

The genus Psyllobora has been created by the French Chevrolat and directly resumed and validated by the count P. Dejean in 1833, in the catalogue of the Beetles of his collection: the French naturalist will place there only the 22-spot Ladybird but now this genus includes numerous North and South American, Asian and African species. We must note that the genus Thea auct. has included for many years the 22-spot Ladybird and some scientific literature still utilizes the old binomen Thea vigintiduopunctata.

Let us now talk of the etymology of this species. The name of the genus Psyllobora is formed by two parts: «psyllo» that comes from the old Greek (ψύλλα), “psulla” = small venomous insect, flea or even aphid and by «bora» (βορά) “bora” = food (what the animals eat). For what the species vigintiduopunctata, is concerned, this is formed by the Latin cardinal adjective “vigintiduo” = twenty two and by the name “punctata” = with points, spots, referring to the 22 black spots on the elytra.

The English have called it 22-spot ladybird, the Italians Coccinella Gialla, the Germans Zweiundzwanzigpunkt-Marienkäfer, the Dutch Citroenlieveheersbeestje and the Spaniards Mariquitas amarilla. 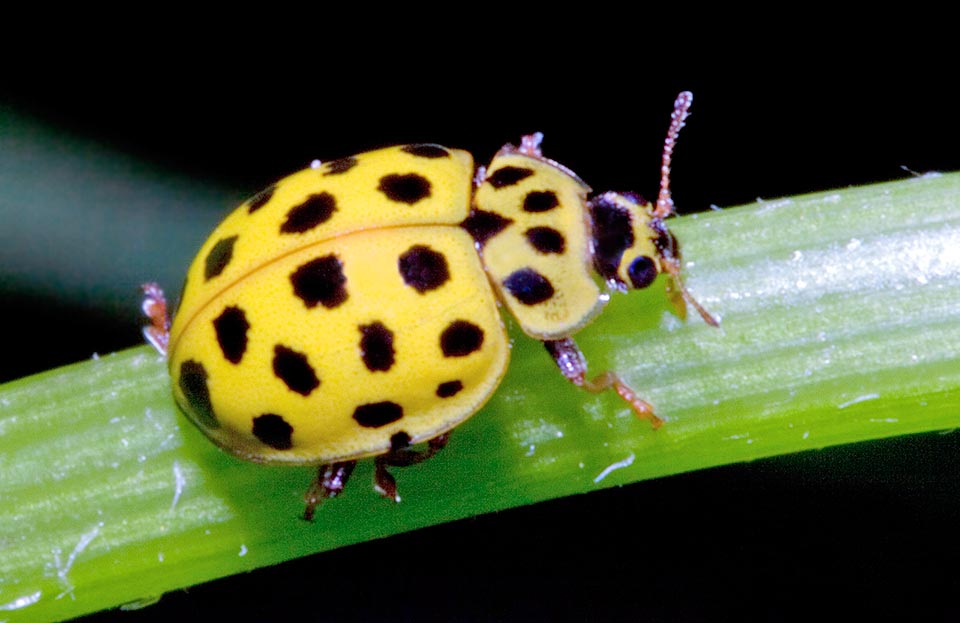 The length of a Psyllobora vigintiduopunctata varies from 3 to 6 mm. The ancestors of the ladybirds nourished of fungi and only later on have become greedy predators of mealybugs and aphids. The 22-spot ladybird is still strictly mycophagous eating, on the leaves, moulds responsible of various forms of oidium and rusts © Giuseppe Mazza

This ladybird lives indicatively all the Palearctic region and the oases of the deserts, excluding the tundra. It has been reported also in USA but it does not seem that it has diffused.

“Tell me what you eat and I will tell you where you can find me” …. in fact, to observe it is necessary to know its feeding habits. 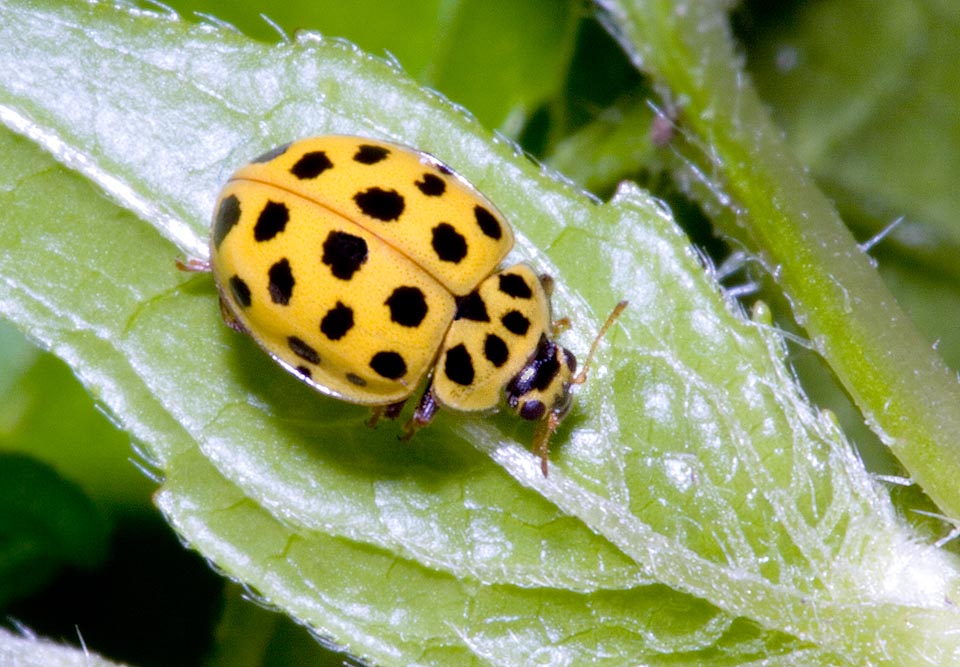 Here while eating on a leaf of rose attacked by the oidium. It eats the hyphae and the spores of these Ascomycete fungi of the order of the Ersiphales, cleaning, every day, an average surface of 30 cm2. It is found on the oak, maple, dogwood and various herbaceous species, like umbellifers and in particular the Heracleum sphondylium © Giuseppe Mazza

It nourishes of mildews and therefore it is found usually on the vegetable essences where these concentrations appear most frequently, such as the oak, the mountain maple and the dogwoods. Among the herbaceous plants, the preferred one appears to be the hogweed. It is to be noted that some authors cite it also on most of the Apiaceae, the Fabaceae but also on other common plants (roses, nettles, brackens, brambles, thistles, burdocks, ivies …).

It can be 3 to 5 mm long. The adult has the head yellow with a black spot on the vertix or on the rear part of the head, with pronotum often two-spotted in the male, and with black spot in the female prolonging on the upper lip.

The pronotum is yellow to beige, with five black spots arranged in two rows, rarely merged. The scutellum is black. Elitra usually with 22 black spots on yellow background and some spots are often small and often merged in a common one. 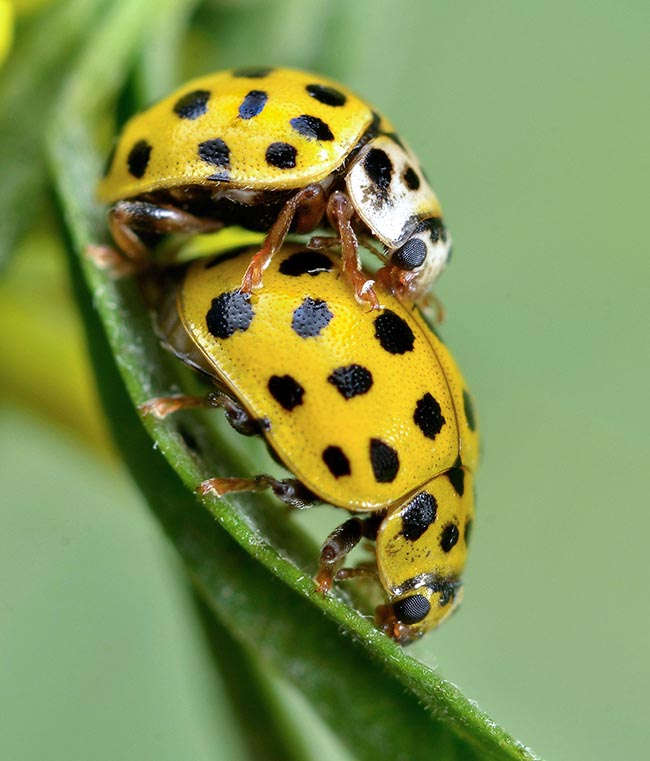 A mating. The females can lay 20-100 eggs, depending on the temperature and the abundance of food © San Martin

The pattern of the two elytra may vary but the chromatic variations appear however rare. We must note that in the male, the pronotum is at times paler than the elytra. The belly is usually black whilst the legs are usually less dark or completely brown.

The larvae have a blackish head dotted of yellow and the integument, also yellow, is marked on the pronotum by 4 black maculae united in lateral couples. Are present also 4 black spots on the abdomen, also grouped in couple on the sides (at times only two lateral black spots on the first visible segment). The chrysalises are fixed on a vegetable support, often a leaf and have a smooth yellowish body, with four or five black spots linearly arranged on each single integument.

This ladybird, with its yellow livery black spotted, is easy to recognize and cannot be mistaken, at our latitudes, except with the 14-spotted Ladybird (Propylea quatuordecimpunctata).

Contrary to what believes most of the people, not all ladybirds are predators of aphids or cochineals: in fact, their ancestors were mycophagous. These primitive species at the beginning were nourishing of fungi and then have evolved becoming coccidophagous (predators of cochineals) then aphidophagous (consumers of aphids).

The 22-spot ladybird is part of some phytophagous species of our fauna but contrary to others, their larvae and the adults reveal strictly mycetophagous, frequenting the trees and the shrubs where they nourish exclusively of moulds of the order of the Erysiphales (ascomycete fungi), it finds on the leaves, pathogens that infect more than 10.000 species of plants and responsible of various forms of mouldings and rusts.

More precisely, they devour the hyphae (vegetative mechanisms composed of basic filaments) and the conidiospores (spores) of these moulds.

This ladybird lives in the herbaceous and shrubby layer, rarely above a metre over the ground whilst other species live among the fronds of the trees. This does not prevent it to frequent assiduously the foliage of the woody plants but these are always young suckers, or small bushes or low brushwoods. 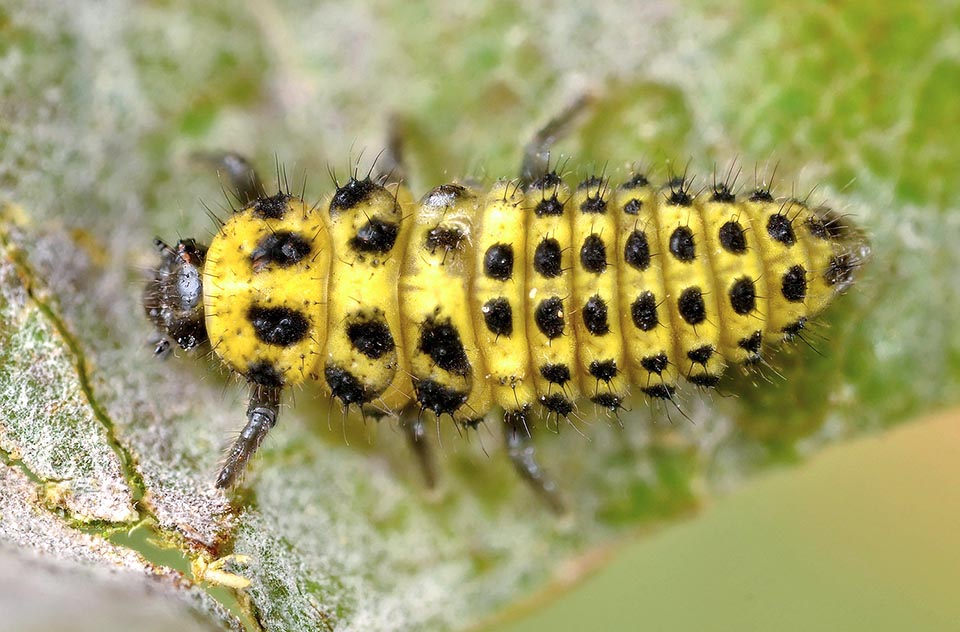 A larva. In controlled laboratory conditions, the complete development, from egg to adult, takes 18 to 24 days © Gilles San Martin

In-depth studies have proven that this ladybird, from the first larval stage to the stage of adult, consumes every day the quantity of mould scattered on a surface of 30 square centimetres.

Some authors think that the Psyllobora can nourish also of aphids, theory rejected by most of the scholars. Actually, and with reason, it is sufficient to observe its mouth apparatus to understand the reason: to consume preys or vegetables are necessary specialized mandibles and those of the Psyllobora have a mycophagous ladybirds morphology. Is present a series of small teeth, placed on the outer part of the mandible, that facilitate the collection of the spores and of the hyphae by means of the scraping of the mouldy part.

Its annual cycle is neatly out of phase if compared to that of the ladybirds that nourish of aphids (aphidophagous – see for instance the Seven-spot ladybird and the Two-spot ladybird). In western Europe the larvae are observed mainly from late July to early September, optimal period of development of the rust on the panax. The birth of the new generation occurs by the end of summer and the winter diapause also begins later and prolongs up to the following spring. 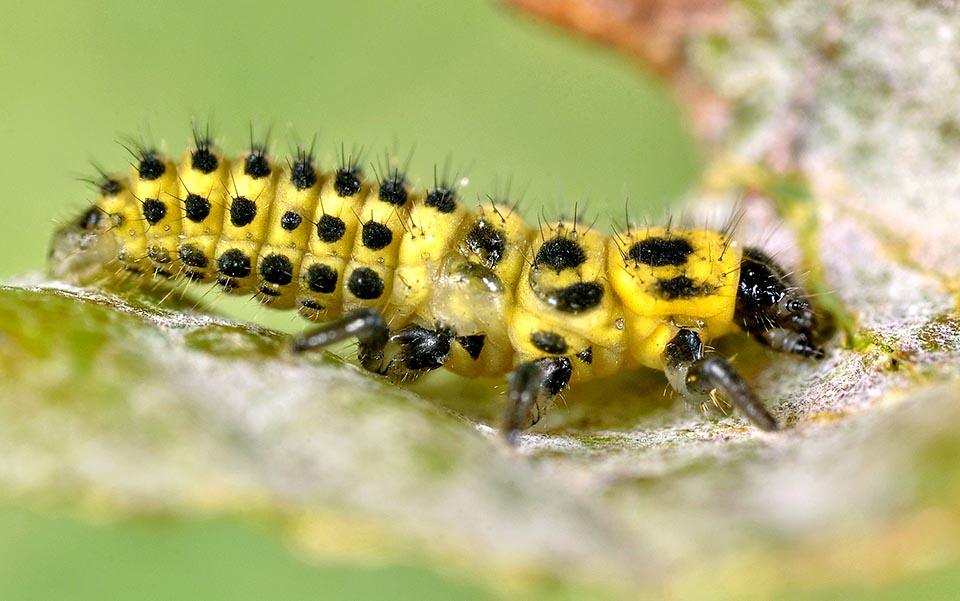 The larva eats moulds. American agronomists thought to take advantage from its mycophagous capacities to clean the vineyards from the rusts, but, soon, they have abandoned their attempts. The ladybird consumed in fact the moulds but in the mean time reinfected the plant carrying on the skin the conidia of oidium © Gilles San Martin

The adult ladybird spends the winter close to the soil, at times massed in the tufts of grass, between the dead barks and also among the felted and rolled leaves.

Its complete development in nature has not yet been well determined but in a condition controlled in laboratory, are necessary 18 to 24 days to complete the cycle egg/larva/adult, depending on the type of mould utilized as nourishment. The higher the average temperature, the shorter the development will be. Also the fecundity varies enormously, passing from 20 to 100 eggs and is in part linked to the temperature and the food.

In western Europe the populations of this ladybird do not seem to be menaced by the human activities. It is also true that they live on vegetable species little sprayed with pesticides.

The populations seem to be stable and the Psyllobora does not appear, like the other ladybirds, on the list of the species protected by the European Community, as well as on a national scale, on the French and Belgian lists. 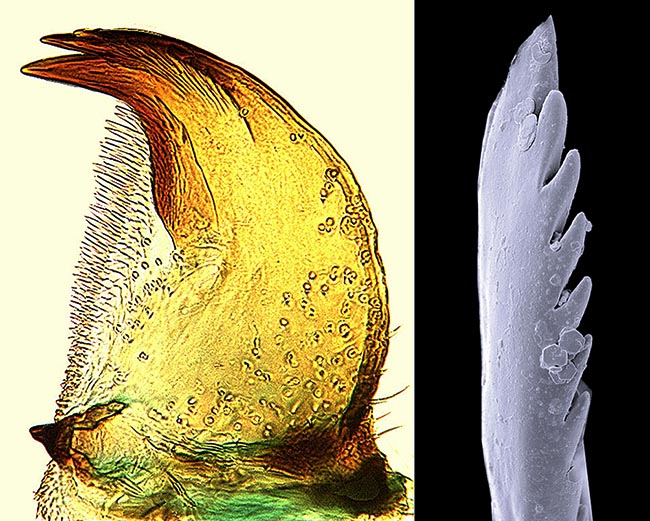 Left, complete mandible of a mycophagous ladybird, seen at the microscope. Right, close-up at the scanning electron microscope, of the series of small teeth that facilitate the collection of the spores and of the hyphae © Adam Slipinski CSIRO

Among the parasites, even if in limited number, are to be reported in particular some flies like the Phalacrotophora fasciata (family of the Phoridae) and Homalotylus flaminius (family of the Encyrtidae) as well as some small wasps of the family of the Braconidae such as Dinocampus coccinelae. The populations of Psyllabora appear to be little affected by the parasitism.

This species is not utilized in the biological control. Some American agronomists were thinking to take advantage from its mycophagy to get rid of the rust of the vineyards but quite soon they have abandoned their attempts. This ladybird consumed well these moulds but reinfected directly the plant, depositing on it conidia (spores that ensure the sexual multiplicarion of the fungi) that covered their integuments.

The spotting of the elytra does not absolutely indicate the age of the ladybirds. The Two-spot ladybird does not then correspond to a two years old specimen of the Seven-spot ladybird, as well as an old patriarch of Psyllobora with its 22 spots by sure should not have reached the respectable age of twenty-two years! Though this naive story can be captivating, it does not reflect in any way the biological reality. The spots are simply typical of a species: two spots for the Adalia, seven for the Seven-spot ladybird, and so on for all other species. They do not modify with the years, not even with the months: in any case no ladybird lives for more than two years!

Psyllobora vigintiduopunctata was last modified: May 15th, 2020 by Giuseppe Mazza