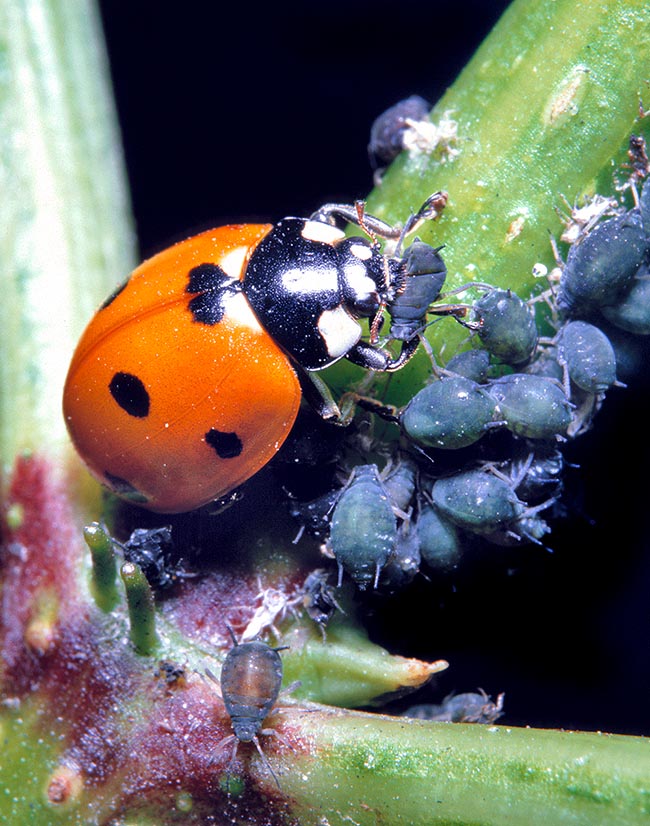 The larvae of the Seven-spotted ladybug or Common ladybug (Coccinella septempunctata) may eat, depending on the period of the year and the environment, 100-2000 aphids daily, whilst adults “content” of 100-200 victims © Giuseppe Mazza

The name of the genus Coccinella is an adaptation of the Latin name “coccinella”, in its turn derived from the late Latin “coccinus” (adjective meaning scarlet), diminutive of “coccus” = red berry, with reference to the red colour of the elytra of many taxa of ladybugs. For what the specific name is concerned, septempunctata, is composed by the Latin terms “septem” = “seven” and “punctata” = spotted, due to the seven black spots on the two elytra.

The ladybugs are known in France with various nicknames such as Bête à bon Dieu, Bête à Dieu, Bête à Marie, Bête à Saint Jean, Bête à la Vierge, or “Vache à Dieu”. In the other countries they are at times considered as lucky charms or have names with religious relevance, like Gallinella della Madonna in Italy; Marienkäfer or Himmelskuchlichen in Germany; Ladybug or Ladybird in England.

The genus Coccinella includes a large number of species well diffused in the Palearctic and Nearctic regions and similar genera are present in the Neotropical and Afrotropical regions. The most recent official systematic list, shows 24 species and subspecies, divided in 3 subgenera (Chelonitis, Coccinella and Spilota), all widely diffused in Europe.

The family of the Coccinellidae has appeared in the Secondary Era (Mesozoic). One of the lines should have evolved from a strain of primitive species of Angarian origin (the present Eastern Siberia) getting up to the Coccinella septempunctata. The present populations of this species occupy widely all the Palearctic region, but Sahara, reaching northwards the tundra, India, Bangladesh and China up to Shanghai. However, the species appears to be absent from an area going in Siberia, from the tundra southwards, up to the Lake Baikal and the region of Okhotsk, in a such neat way that the populations of Kamchatka, of Sakhalin, of southern China and of Japan are isolated from the others.

The common ladybug is eurytopic, that is capable to bear different climatic and environmental situations and is met from the sea level up to the summit of high mountains, from tundra to tropical Asia. It is found in the forests, in the woods, in the meadows, the fields, the orchards, in the deserts excepting the Sahara outside the oases. The species seems to prefer the hill and mountain regions. 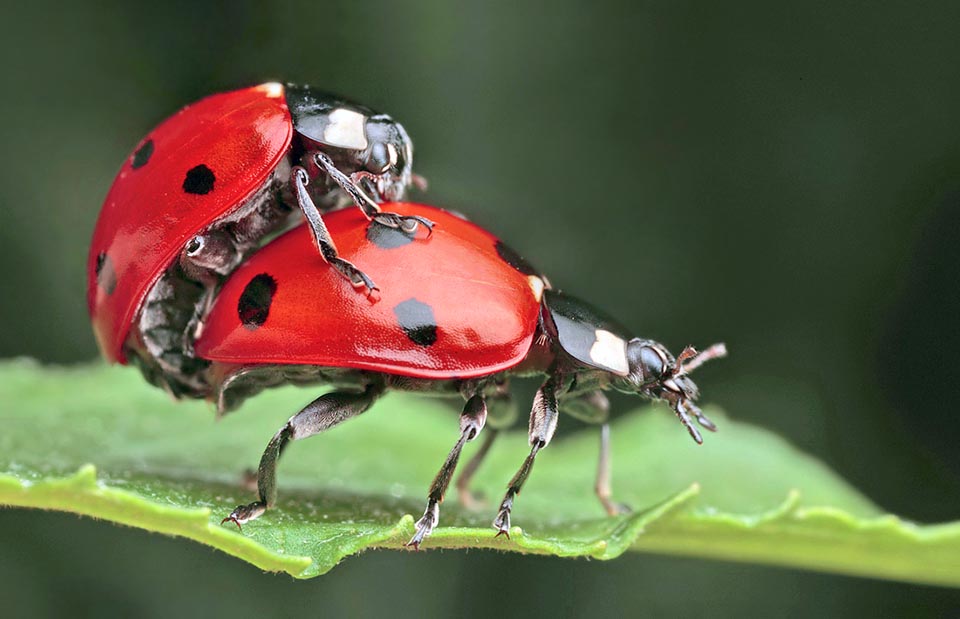 A mating. The dimensions of the Coccinella septempunctata vary from 5 to 8 mm, whilst the livery is remarkably stable with black spots on orange or red background. More or less big, these are three per each elytron plus the common scutellary dot. The fertility rate is quite variable and mainly depends from the abundance of food © Matt Cole

In Great Britain, the first stages have been observed on more than 250 indigenous plants, not considering the weeds and the various species of cultivated plants. Among its choice plants we cite mainly the nettles, the thistles, the centaureas, the great apiaceae, the vetches, the groundsels and other chenopods.

Some authors report them also on shrubs the brooms and gorses and also on trees such as pines and willows. It also loves the fields of cereals, rape, cotton, beets, potatoes, peas and cabbages. It appears to prefer the sunny habitats and avoids the too humid and closed biotopes.

If the size may vary from 5 to 8 mm, its livery is on the contrary rather stable. The black spots, more or less big, on orange or red background, are almost always seven (at most 11), three on each elytron plus one scutellar spot on the two elytra. 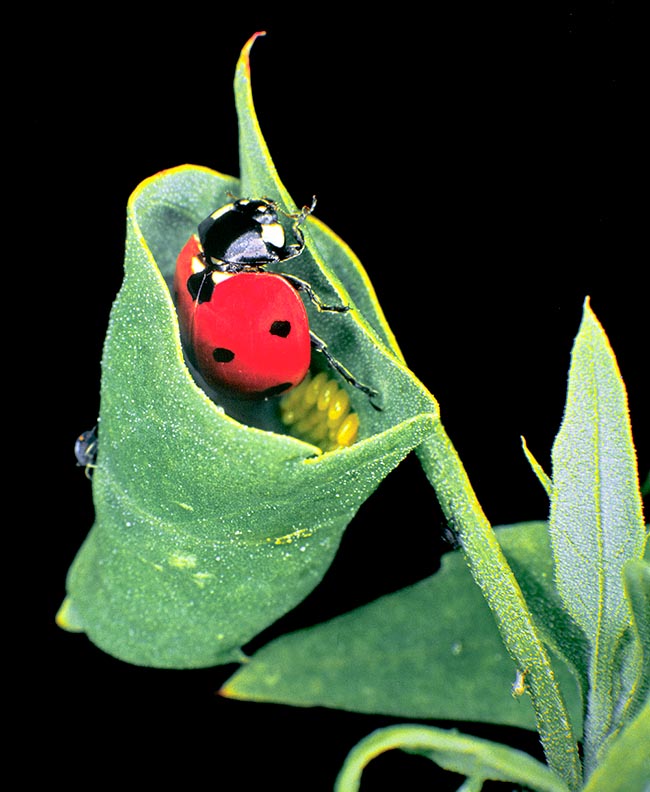 The females of the first annual generation lay 700-1400 eggs, often in sheltered locations such as on this rounded leaf of a plant infested by aphids, whilst those of the second generation stop at 400-1000 eggs © Giuseppe Mazza

Oval to circulare body, with black head marked by a pair of white spots on the front and cheeks with black palps and reddish to yellow antennas. Black pronotum with one quadrangular dot at the level of the lateral fore corners. Elytra red, ocheraceous or orange.

The 7 points are at times merged in belts or in oblique lines and exceptionally  elytra may be black, with or without red dots; near the scutellum and along the fore suture of the elytra, stands a big common black dot. The tegument is covered by a dense dotting, fine and uniform. Epipleural 10 times narrower than the width of the body. The ventral face and the legs are black whilst the mesepimerons and at times also the metaepimerons are white.

Globose nymph, naked, excepting the extremity of the abdomen that bears the residues of the exuvia of last larval stage. Colouration frequently orange with blackish maculae on most of the segments.

In this species, some trophic and climatic conditions may lead to demographic peaks. It happens that a warm summer; followed by a mild winter, causes the appearance of enormous spring populations of aphids and consequently a food availability for the larvae of the ladybug: years good for ladybugs!

However, the predation and the summer drought reduce the number of preys and create a lack of food, causing a massive migration of ladybugs transported by warm currents to considerable distances. These convoys of millions of individuals end on the coasts drowning in mass and can in these conditions prick lightly the skin of the bathers.

Demographic explosions of these quantities have been reported on the coasts of western Europe in 1952, in 1976, in 1990 and in 1996. Conversely, the populations of seven-spotted ladybugs may rarefy after particularly rigid winters, that cause massive mortalities in the adults: some populations will need several years to reconstitute.

The Common ladybug is particularly greedy and nourish of a fifty species of hexapods beloging to various orders and different families. Essentially aphidophagous, it eats also other homopterans such as psyllas, leafhoppers, aleyrods or mealybugs but also thrips (Thysanopterans), chrysopids (Neuropterans) and various other species of insects, such as small dipterans, butterflies and coleopters). Some predate species of acarids. 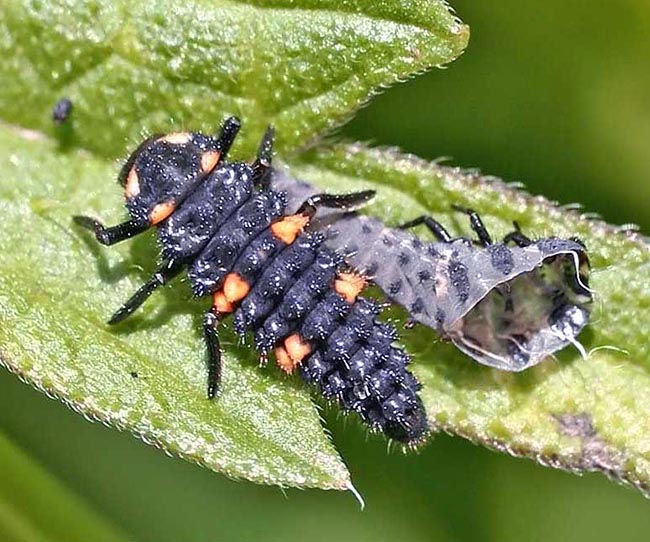 There are 4 larval stages and one prepupal, during which the larva does not eat © Claude Galand

Various authors indicate the consumption, more or less abundant, of pollen and nectar. It is noted that some species of aphids are harmful for the ladybug, causing a reduction of the fertility and mortality in the transformation of the larva into adult.

As soon as it has found a prey, the larva begins to suck its abdomen (operation that requires 30 seconds), injecting then for 5 or 7 times a gastric juice (at intervals of 5-10 seconds), to absorb the dissolved tissues and then chews the hard parts. It does not devour the prey completely even if hungry. The adult behaves in the same way, contenting to suck the preys when they are numerous, operation that requires 50-65 seconds.

The fecundity is variable and depends mainly on the feeding. The females of first generation lay from 700 to 1.400 eggs, whilst those of second between 400 and 1.000 (exceptionally more).

The eggs are laid on the leaves in small groups and not far from the future preys. There are four larval stages and one prepupal, during which the larva does not nourish but looks for the corner suitable for its pupation: this stage lasts about one day. The larvae and the nymph are mainly found on the herbaceous plants.

The takeoff towards the hibernation begins in Europe during the month of August. The diapause takes place in small groups hidden in the humus, under the stones, at the foot of the trees, in small crevices on the border of the woods… An adult may hibernate for two consecutive winters.

The European populations are essentially formed by monovoltine specimens with a reduced percentage of plurivoltine. In western Europe, the monovoltine forms have a spring hatching very prolonged in the time. If the preys available are abundant, there may be a second generation, but, usually, the diapausa lasts uninterrupted from the end of summer up to the following spring.

The minimum threshold of activity is at about 13 °C. The duration of the complete cycle depends on the number of the preys and the temperature. It varies from 15 days with high temperatures (from 25 to 29 °C) to 40 and even 55 days when the temperature is around the 18 °C. 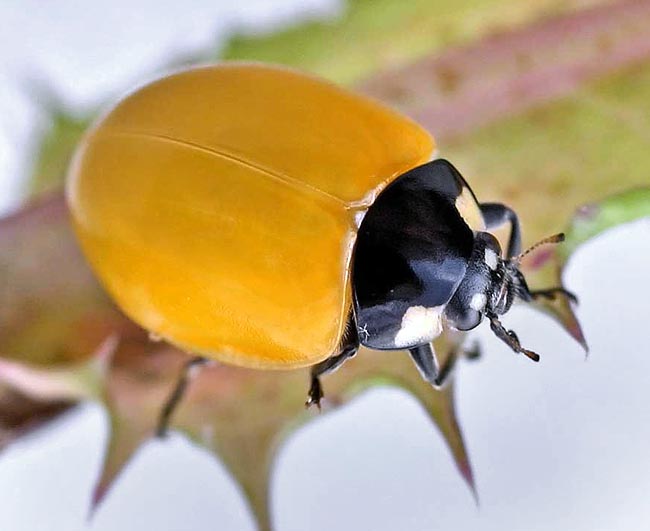 In first times after birth, the bugs do not have the black dots and the elytra are uniformly yellow © Claude Galand

The Seven-spotted ladybug, consumes, depending on the period of the year and the biotope where it is located, from 100 to almost 2000 aphids per day, even if an adult is “contented” with 100-200 individuals.

The adult ladybugs have few predators and it is thought that this is due to the red of the elytra (aposematic colour) and to the self bleeding: a sort of reflex hemorrhage that occurs as soon as the insect feels to be aggressed. This manifests with the dissuasive exudation of a “blood” that most frequently drips from the joints of the limbs, full of toxic alkaloids (such as the amine oxide and the precoccinelline).

A ladybug when in danger may pretend to be dead (phenomenon of thanatosis). Among its rare predators, we cite the Praying mantis, some species of bugs, some birds and micro-mammals.

Coccinella septempunctata was last modified: May 28th, 2020 by Giuseppe Mazza