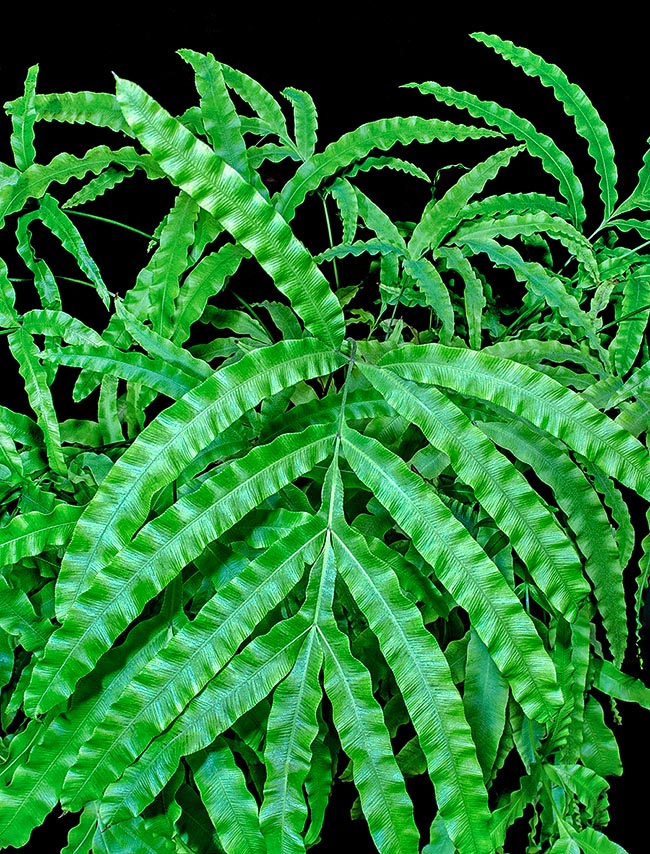 Pteris cretica is a relic of the Tertiary period tropical flora, between 65 and 1,8 million years ago © Giuseppe Mazza

Pteris comes from the Greek  “πτέρις” (ptéris), fern, similar to  “πτερóν” (pterόn), ala, because of the shape of the fronds of these plants; the specific epithet refers to the old Greek of Crete  “Κρήτη” (Krētē), Crete.

Pteris cretica L. (1767) is a species with pantropical distribution, native to Eurasia and Africa, largely naturalized in America.

It grows on calcareous substrata, close to the brooks, in the cracks of the shady cliffs, in the humid woods, at altitudes between 100 and 800 metres.

In the origin areas it is a rare plant, as it was adapted to live in humid warm climates and now is reduced to be a relic of a tertiary tropical flora, escaped extinction surviving in locations where the particular geomorphological conditions have softened the changes of the climate creating stable microclimatic niches.

This species is commonly called “Creta brake” and belongs to the family Pteridaceae of the Pteridofite, vascular plants that reproduce by means of spores and do not have seeds or flowers.

Pteris cretica has a short creeping rhizome, covered by dark brown scales and fronds (megaphylls) that can reach a height of 75 cm, arcuate, supported by a petiole, usually longer than the lamina, almost glabrous, of dark colour.

The lamina is divided in linear-lanceolate pinnae with serrated margins at the apex and of bright green colour, at times with a central whitish striation. The pinnae are in number of 3-6 (-10) pairs and those of the lowest couple fork at least once.

The fertile pinnae are narrower than the sterile ones and bear, in the lower pagina along the convolute margin, the sporangia grouped in sori. The spores ripen in summer.

P. cretica is a very ornamental plant, often utilized to embellish shady and humid corners of the gardens but also as a plant in pots or for indoor spaces. 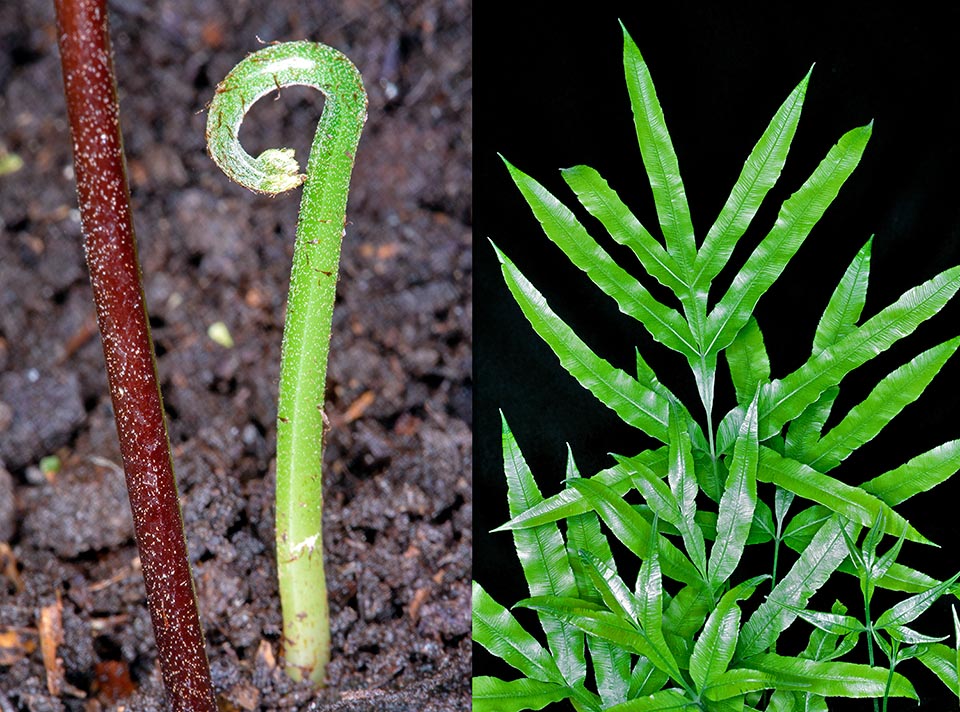 Native to Eurasia and Africa, naturalized in America, Pteris cretica is now a species with pantropical distribution. Left, frond growing from the creeping rhizome, and the typically dark petiole of the near lamina. Right, growing laminae. To note the characteristic bifurcation of the couple of pinnae down below © Giuseppe Mazza

It is easy to cultivate, even if it requires continuous attention, especially for what light, temperature and humidity are concerned. It multiplies in spring, cutting, with a sharp knife, the rhizome in sections having at least one frond and the feeding roots.

The loam to be used must be formed by a mixture based on peat or a combination in equal parts of a mix based on earth and decomposed leaves. The rhizome must be placed just under the surface of the soil of plotting. When the roots have filled up the pot, in the following spring, the seedlings are to be put in bigger containers. 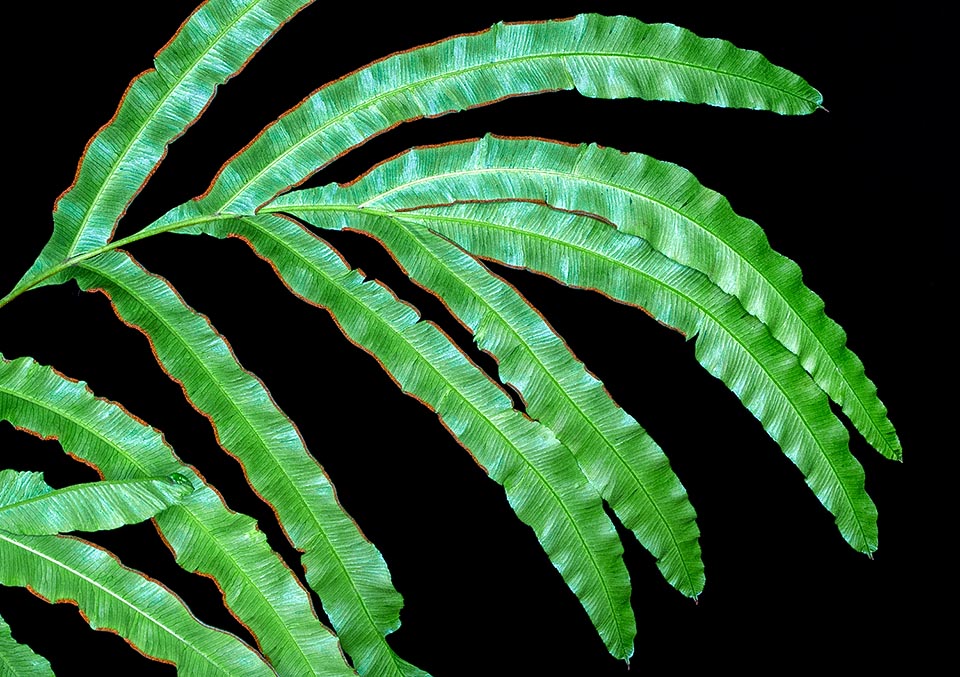 The fertile pinnae are narrower than the sterile ones and bear, in the lower pagina along the convolute edge, the sporangia grouped in sori © Giuseppe Mazza

It can be also reproduced in summer by cultivation of spores scraping the brown edge of the fronds and making them deposit on humid loam that is to be placed in a warm location. After some weeks will appear the first seedlings that can be thinned out not before the following spring.

Polyploidy, hybridization and apomixis (absence of gametes) phenomena have given origin to important processes of speciation of the ferns. So, for example,  P. cretica var. laeta (Wall. ex Ettingsh.) C. Chr. & Tardieu is an apomictic triploid as well as P. cretica var. nervosa (Thunb.) Ching & S.H. Wu  both typical of eastern Asia. 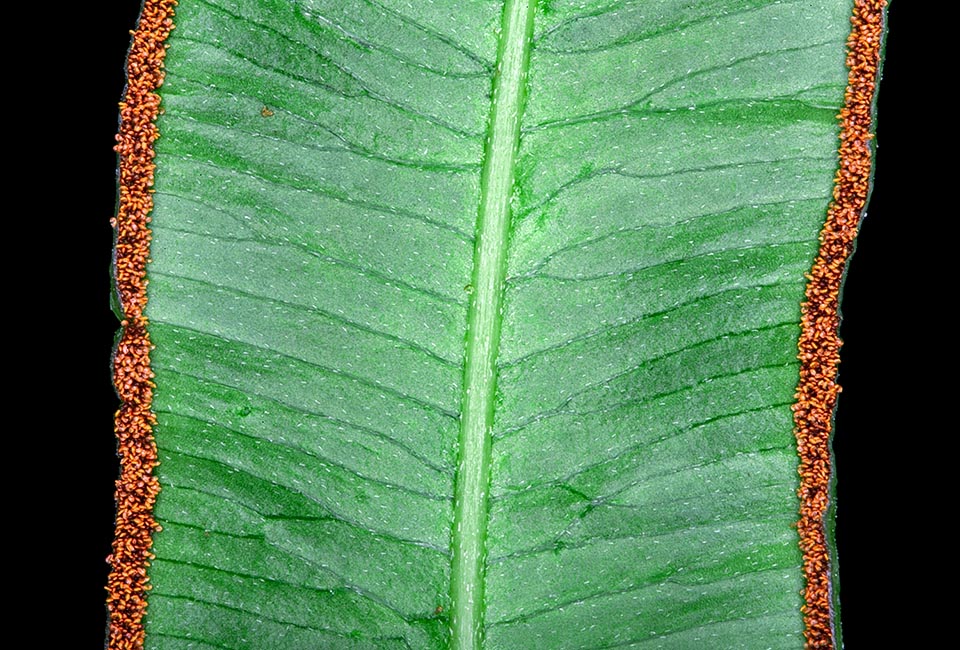 Enlarged particular of the lower pagina of a pinna showing the veins, the neat rows of sporangia on the margin and a minuscule hairiness © Giuseppe Mazza

Thanks to these phenomena, several very ornamental cultivars do exist on the market.

P. cretica ‘Albolineata’ presents pinnae with a white stripe on the two sides of the central vein and a remarkable resistance to drought; P. cretica ‘Cristata’ has green and crested pinnae in the distal portion; P. cretica ‘Maya’ is small and has mottled fronds. 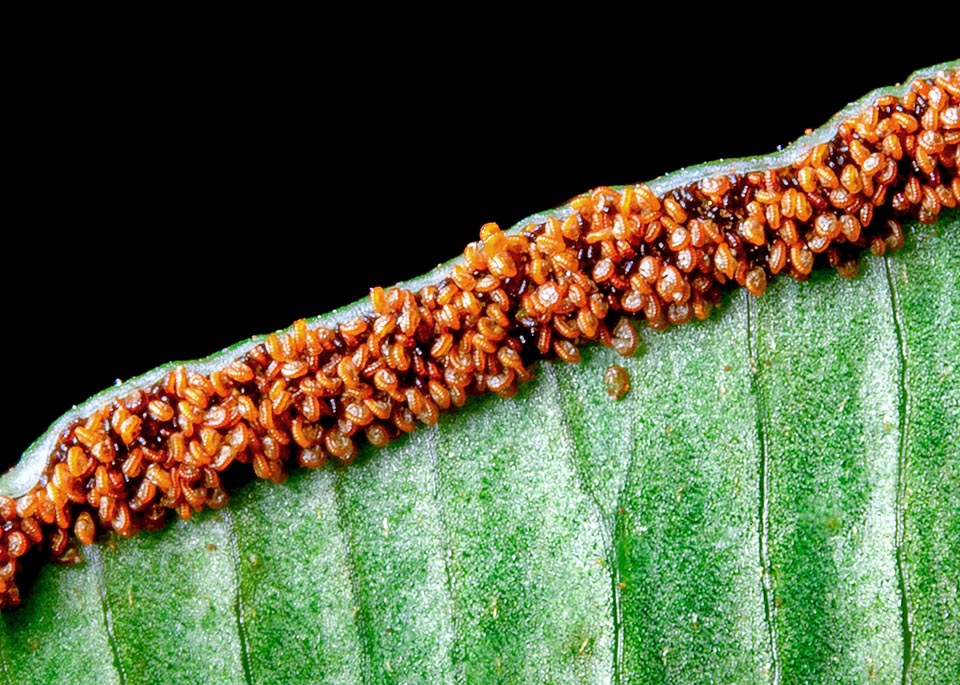 Further sporangia enlargement. As well as by rhizomes division, this fern may reproduce in summer by cultivation of spores scraping the brown edge of the fronds over a humid soil in a warm location. It ia an easy indoor plant, even if requiring a lot of attention, for what the light, the temperature and the humidity are concerned © G. Mazza

Recent studies have shown the capacity of P. cretica to tolerate and accumulate high concentrations of arsenic and antimony in the fronds opening major prospects on the phyto-recovery of polluted sites and on the phyto-filtration in order to quickly eliminate the arsenic from the drinking water.