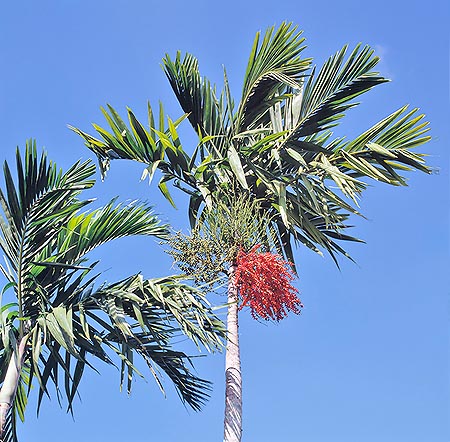 The Ptychosperma elegans is very frequent in the tropical gardens © Mazza

The Ptychosperma elegans (R.Br.) Blume (1843) is native to Australia, in particular to the Northern Territory and Queensland, where it grows in the coastal pluvial forests up to an altitude of 600 metres.

The name of the genus comes from the Greek ‘ptyché’ = fold and ‘sperma’ = semen, with a clear reference to the wrinkles present on the seed.

The name of the species is the Latin name “elegans” = elegant.

Plant with solitary trunk, of green colour in the younger part and greyish in the older one, which can reach the 15 metres of height with a diameter of 12 cm. The 8 to 10 elegantly arcuate leaves are pinnate, of glossy intense green, long up to 3 metres, with leaflets, long even 1 metre in the median part, cut obliquely and indented at the apex. The foliar base wraps entirely the stem for a length of 40-50 cm.

The inflorescence, long 1 metre, under the leaves, carries unisexual cream-green flowers disposed on the typical triad (a female flower between two male ones). The fruits are globose, 10-15 mm of length, of rec colour when ripe. It reproduces by seed which germinates in 2-3 months. 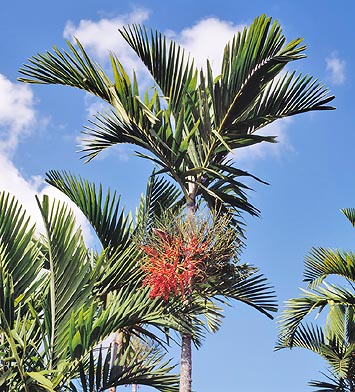 The plant is widely cultivated for its ornamental characteristics in the tropical and subtropical countries, both in full sun and in partial shade.

The cultivation in the warm-temperate ones may be tried as it resists for short periods, when adult and in well drained soils, also to rather low temperatures, around the 0 °C.

Because of its reduced size and its elegant look, the Ptychosperma elegans proves to be particularly suitable for its utilization in patios and in great open inner courts. It has a fairly good employment, in pot, for indoor decoration.