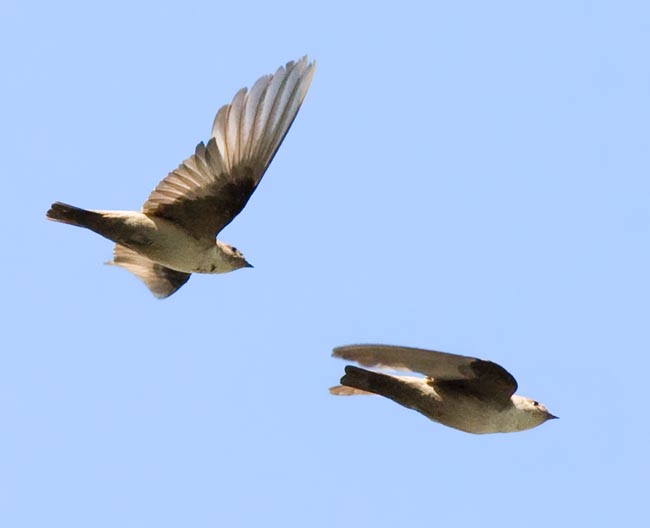 The Eurasian Crag Martin (Ptyonoprogne rupestris – Scopoli, 1769) is a bird afferent to the subclass of the (Neornithes), order of the Passeriforms (Passeriformes), family of the Hirundinids (Hirundinidae).

These birds, like the other species of swallows, have the common characteristic of a continuous flight, hunting all the day long the insects they nourish of.

They rarely go down to the ground, mainly only for getting the mud and the straws with which they build up their nest.

But, if on the ground they are clumsy, hampered by the shortness of their legs, when in the sky, they are real and genuine acrobats, absolute masters of the means.

To observe these birds flying and their evolutions is a treat for the ornithological biologist’s eye.

Extraordinary flyers, they are swallows capable to chase their preys (insects which are equally able in the flight), at different altitudes over the ground, depending on the species and the different atmospheric conditions. 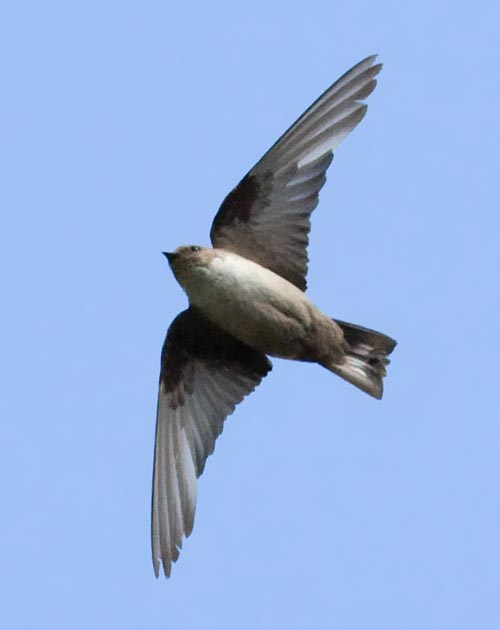 The biologists, during the seventies of the last century, discovered in fact that an implement of the atmospheric humidity, which heralds rainfalls, obliges the insects to fly closer to the ground. For such reasons, the flight of the swallows, including that of the Ptyonoprogne rupestris, may be utilized as an empirical but efficient “weather marker”. A low flight ultimately means rain approaching.

Autochthonous of central-southern Eurasia, the crag martins are migratory and sedentary. The wintering quarters are located in the Mediterranean area, whilst sedentary pairs are present in the Madonie Mountains, in Sicily.

North, they do not pass the 48th parallel. These birds winter, south of their range, besides in the Mediterranean basin, also in North Africa.

The crag martin lives usually in rocky areas, from the sea level up to more than 2.000 m of altitude, with a special fondness for the sunny walls and the rocky ridges, where it nidifies.

But it may be found also in the urban areas, where it often builds up its nest on the towers or on the abandoned houses.

Morphologically, it recalls the Sand martin (Riparia riparia), due to the brownish hues of the upper parts, and the Swallow (Hirundo rustica for the overall shape of the body and the beak. The tail of the crag martin, barely indented, is adorned with a series of oval white spots. There is absence of sexual dimorphism. When in flight, the silhouette of the bird appears dark to those looking at it from the ground. It may be 15 cm long, with a weight of about 22 g and little more than 30 cm of wingspan. 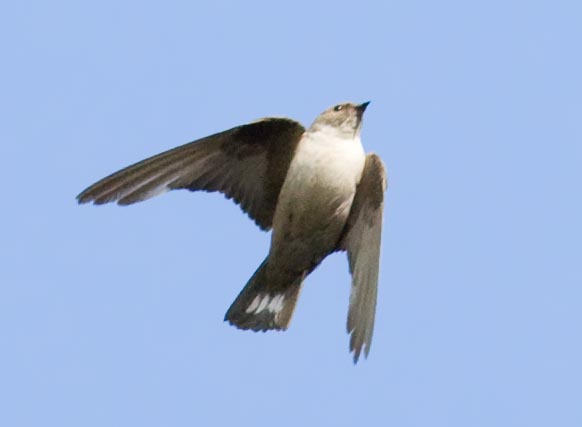 It chiefly nourishes of butterflies, diurnal and nocturnal, which it always hunts while flying, skimming the rocky walls at incredible speed in a continuous coming and going. It also willingly hunts over the water streams. In this case, the choice preys are the just born mayflies and the dragonflies.

By late April (in Italy, between May and October), the male builds up a cup-shaped nest, where the female lays from 3 to 5 white, red-dotted, eggs, which will be hatched for 13-17 days. The young fly away when about 25 days old and there may be 1-2 clutches per year. The nidification, as we have seen, may take place on the sheer rock cliffs, as well as on old buildings, and also under the bridges, in the junction points.

While flying, in order to communicate with the other conspecifics, Ptyonoprogne rupestris emit a chattering noise.