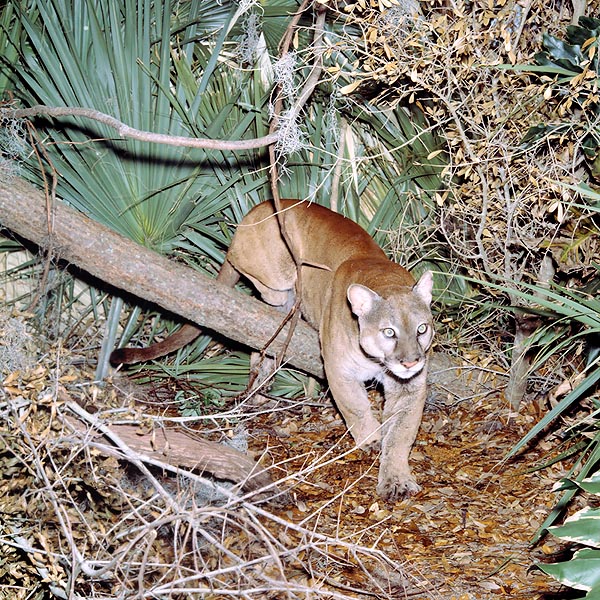 The Puma, or Cougar, or Mountain lion (Puma concolor, Bangs, 1899, by some called Felis concolor) is a member of the family of the Felidae, carnivorous, tetrapod, placentate.

It lives only in the New World, and is the second biggest feline, after the members of the genus Panthera and Acinonyx.

In fact, the Lion (Panthera leo), the Tiger (Panthera tigris), the Leopard (Panthera pardus), the Jaguar (Panthera onca) and the Cheetah ( Acinonyx jubatus ), even if in this last case the differences are minimal, are species bigger than the puma.

Specifically, as we shall see, the puma lives in the Americas, has a chiefly arboreal life, but it may be also rupicolous, as it lives well also in rocky areas, mountains, hills and deserts, more precisely in stony areas.

Historically, it has been observed that it eschews the man, even if, especially in the past, there have been frequent fatal attacks during the epic of the Far West, at the expense of the Red Indians, during their hunting trips, or of the settlers who were migrating looking for a house and for lands to cultivate.

Ethnozoologically, the puma, Inca word, or cougar, Apache word (this was an autochthonous American-Indian tribal population of the south-western area of North America), name also very much used in South America, was worshipped practically by all the indigenous populations of the two Americas, due to its strength, the wildness, the capacity of perform several metres long jumps, the style of solitary life and the fact to be able to get close silently to the preys, almost like a spirit. In reality, as briefly said before, as soon as it can, it tends to avoid the man, especially if this one is accompanied by a dog. Though a menaced puma may kill, without any problem, aggressive and big dogs, usually it tends, in fact, to avoid the fight with members of the Canidae, including wolves, jackals and coyotes, as it has a sort of innate repulsion towards these species.

Though less meek than the cheetah, also the puma may be tamed, and it was not rare, in the past, in the big farms of Arizona, Texas or Mexico, to find specimens of this feline trained in guarding. They cohabit fairly well with the other domestic species, such as cats, dogs (even if, as we have seen, it tends not to familiarize much with these ones), and, if well nourished, with the livestock itself (cattle, sheep, goats, horses), but they cannot resist in the attacking the hens, and so it was necessary to protect well the hen-houses.

Especially during the second half of the XIX century and during the first 20-30 years of the XX, this splendid animal was hunted not only because dangerous to the livestock (even if it attacks mostly sheep, goats, rabbits and poultry, much less cattle and horses, because too big for it, even if there have been instances, for bigger specimens of pumas of attacks towards calves and horses), but simply for sport and because, after some, it has an exceptionally good and tasty flesh. And this is an additional reason for the puma to avoid the man. And this is not cowardice, but real caution. 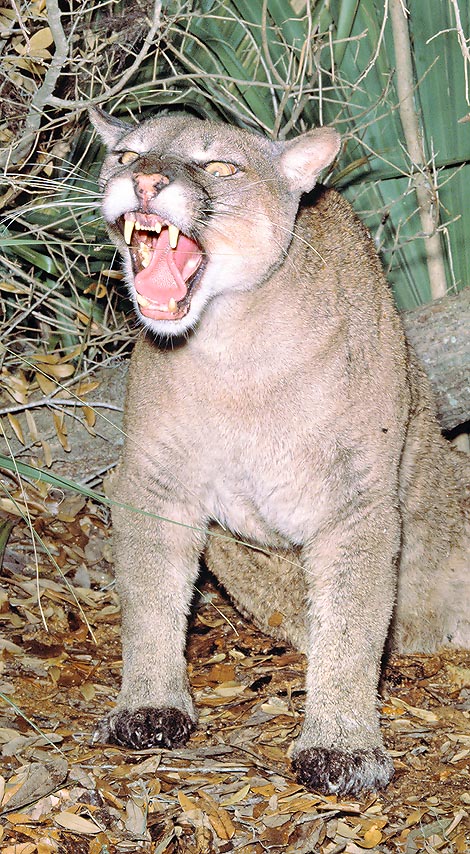 The Puma concolor has several subspecies.

Whilst in South America the puma, called cougar, is very common even nowadays in the wild, in the USA the population is more and more rarefying, due to the urbanization and the spreading of the agriculture, which steal its biotopes and natural ranges, as well as of the intense hunting to which it has been subjected. For this reason, the IUCN carefully monitors its population, and this is considered a species at risk, even if, luckily, it does not yet belong to the red list of endangered species.

The Puma concolor is a big felid, completely different from all other American species belonging to the genus Felis.

The species appearing more similar to it, are, on the contrary, two big wild cats, the Felis aurata, African, and the Felis temminki, living in Asia.

The length, in the biggest specimens of puma is just under the two metres, of which one third concerns the tail. The forms are fairly nimble and powerful, and for this reason the look and the mass are intermediate between those of a big cat and a leopard. The weight varies between 70 and 80 kg, but it is not rare to find specimens reaching even the 120 kg.

In spite of the assumptive common name of mountain or American lion, which often is given, the puma or cougar is not able to roar neither like the Panthera leo, but nut even like the other species of the genera Panthera and Acinonyx, in reality it emits grumblings more similar to the cat’s meowing, but deeper.

The coat may be smooth of bristly depending on the subspecies, but in any case it is always very thick. Also the colouration of the livery is very variable: the tint, always plain on the back and the sides, varies from sand grey with pink shades, which is the colouration of the nominal species Puma concolor (the most classical one), to the silvery grey of some subspecies and the reddish yellow of others.

The lower parts are whitish, whilst the colouration of the muzzle, not uniform, follows always a fixed pattern: the cheeks, the throat, the lower lip and the upper lip at the centre, are always white, whilst at the sides of these last, are evident two shaded black dots, well marked. Finally are white the greatest part of the outline of the eyes, and the auricle. The tail, of equivalent colour of the back, has a terminal black apex.

The powerful musculature characterizing it, allows it to effect even 14 metres long leaps and 5 m high. It has robust paws like those of the leopard and the jaguar. Such robust paws allow it to effect also lightning dashes, and to reach in a few seconds speeds of even 80-90 km/h. They have reported instances of specimens which have reached the 100 km/h and for this it is the second fastest feline after the cheetah. This permits it, along with the capacity to climb very well trees and rocks, to hunt the mountain sheep such as the Bighorn sheep (Ovis canadensis). 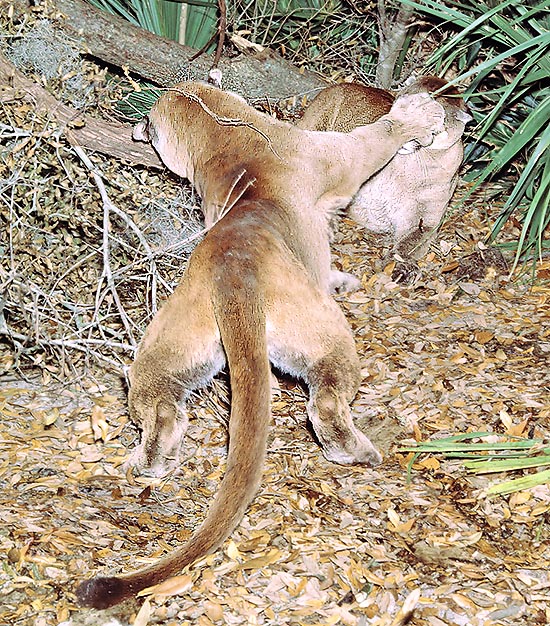 Among the other common preys of the puma and of the different subspecies forming it, depending on the geographic area and the biotope where they are located, are: reindeers and deer, for those of North America, as well as also skunks, polecats, beavers, mice and wild rats, opossums and domestic livestock, such as sheep, goats and cattle. In some subspecies of Puma concolor, mainly of the Central and South American areas, enter their alimentary ecology also birds, fishes, amphibians and tapirs. Conversely, it tends to avoid carrions and reptilians. Coyotes, bobcats or Canadian lynxes are however, in case of fights, overwhelmed by the puma.

They are animals, as already briefly said in the introduction, capable to climb also high trees, where they spend long time, like the leopard, in Africa and in Asia, and the jaguar in South America. They do this for ambushing their preys, but also for resting and for eating, often carrying the killed prey up there, for eating it far from possible competitors, such wolves, coyotes and wild dogs which, moving in group, may create problems.

They have however well adapted to live in the bush as well as in the more desert areas with rocks, such as in those mainly rocky and mountainous.

It may be found also in savannah and prairie biotopes, and also in the equatorial forests (in Florida) and along the banks of the rivers, where, however, they do not love to bathe in the water, unlikely the jaguar which instead loves to do so.

The pumas carry on usually solitary life, but in correspondence of the mating period, when the formed pairs remain united for short time, usually 6-8 days. The reproductive period goes usually from November and June, even there may be temporal differences, in relation with the geographic are where it is located, as well as of we are in regions above and under the Equator. The pregnancy last usually more or less 3 months; are born, on average, two or three cubs, but the progeny may vary from a minimum of one to cases when the new born are even seven or eight.

The new born have brown maculated hair. These dots, after some months, gradually fade and disappear completely when one year old. The average weight of the cubs is usually of 230-450 grams and they are long, at their birth, 18-21 cm. They are nursed by the mother for about one or one and a half month, and then are weaned. When about 20-21 months old, they leave the mother and carry on their independent life.

The IUCN tends, more and more, in cooperation with the Wwf, to maintain at least stable the present population, by creating special protected areas and forbidding the hunting.